Nighttime Landfill Operation in N.J. Proved to be the Solution to a Unique Challenge 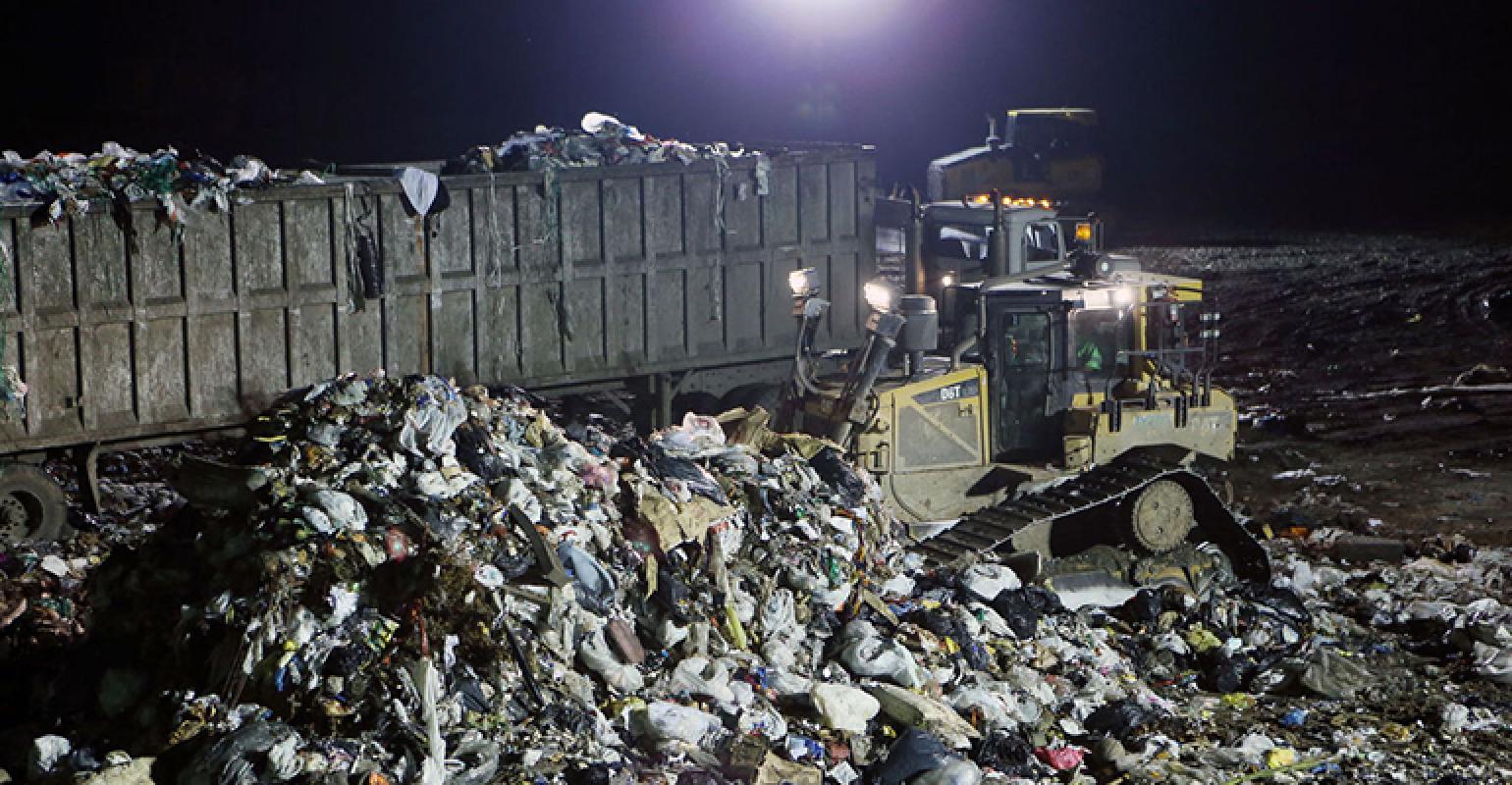 Now 10 years into its operations, ACUA has learned a lot and refined its processes.

For years, Atlantic County, N.J., paid a steep premium to ship municipal solid waste (MSW) out of state. It eventually negotiated a plan to landfill the garbage locally, but under a unique arrangement. With the landfill nearby an air base, the Atlantic County Utilities Authority (ACUA) had to prove it could deter garbage-scavenging birds from entering flight paths and potentially striking aircraft coming to or departing the facility.

The landfill, in Egg Harbor Township, sits adjacent to the New Jersey Air National Guard and the U.S. Coast Guard. The ACUA’s unconventional solution is to operate the landfill by night, with waste transferred after sunset and buried before sunrise so it doesn’t interfere with air base operations. This has entailed running three shifts, hiring a fulltime wildlife biologist, and launching a robust bird control program.

Now 10 years into its operations, ACUA has learned a lot and refined its processes. It routinely reports on operations and meets with the Federal Aviation Administration, the U.S. Air Force and other federal and state agencies. If there are in excess of a specified number of birds present in a given month, the facility is subject to closure.

“We underwent a three-year process where we had to demonstrate success, beginning with 100 tons of waste a night,” says Jim Coffey, ACUA’s solid waste manager. “After documenting that there were no evening scavenging birds, we increased to 800 tons, and eventually began receiving all MSW at night.”

The three-shift operation double handles the waste to get the job done.

It’s tipped in the building during the day. Then it’s reloaded, transferred to the landfill and tipped again by a second shift one hour after dark. A third shift covers the refuse an hour before sun rise.

“Landfilling is more dangerous at night and we are really vigilant on safety,” says Rick Dovey, ACUA president.“Having good lighting, safety equipment and the right rolling stock [loaders and compactors] are critical.”

“Nighttime is shorter in the summer, and that’s when we get most of our material, so this is a big challenge,” Dovey says. “We have to landfill more volume in less time, efficiently and safely.”

The waste must move, even in harsh weather, barring a major blizzard or severe hurricane. Weekly plans are laid out in advance with continual communication between shifts so no questions or problems come up at night.

All along, wildlife biologist Bert Hixon takes care of bird control duties at the site through continuous monitoring, enlisting local Stockton University students to help keep birds at bay and leveraging pyrotechnic devices such as bird bangers and screamer sirens to scare birds off.

“With cooperation from many authority staff we are working to get as close to zero bird events as possible,” Hixon says. “This is while dealing with challenges like the close proximity to salt marshes where gulls nest and roost and coastal storms that drive gulls in. Whenever the wind blows, gulls show up and can hang on the breeze.”

Hixon, alternating with a staff of wildlife technicians, shows up daily at dawn.

It took years to convince New Jersey’s Department of Environmental Protection (NJDEP) to give the project a chance; there was strong opposition from the Federal Aviation Agency, the New Jersey Air National Guard, the U.S. Air Force and local landowners.

The break came when a new DEP commissioner stepped in.

“He was aware of the economic pressures on disposal, and the need for municipalities to be self-sufficient rather than rely on out-of-state disposal resources,” says Dovey.

Not only has the plan proved successful, but the authority went on to get approval to expand its 77-acre footprint to within 10,000 ft. of the runway.

“This was a major modification that could not have been done without excellent bird control, and without the DEP, who has been involved from day one, reaching a comfort level to approve this,” says Conover.

There have, to date, been over 27,000 surveys reporting on bird activity and results of deterrence efforts, as a Gull Task Force continues monitoring, with the U.S. Department of Agriculture (USDA) among members.

“There was concern that gulls would still be attracted to the active landfill operation and exposed MSW during overnight hours.  This has not been the case,” says a USDA spokesperson. “No gulls have ever been detected at night.… No bird-aircraft strikes have been associated with the facility. More notably, the dedicated staff at ACUA … provide dawn-to-dusk coverage to disperse birds as soon as they arrive, which is key.”