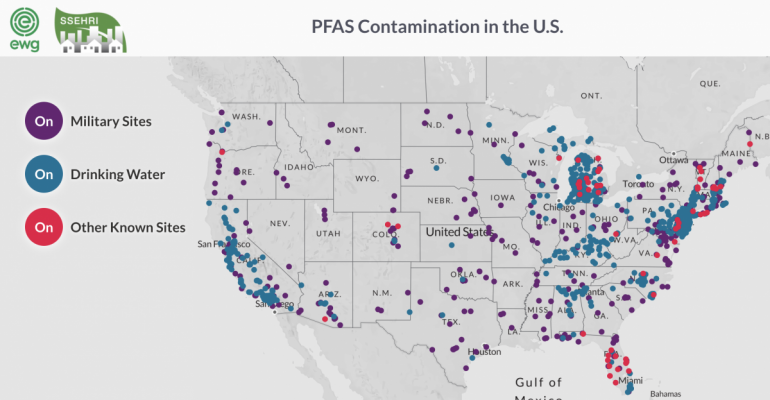 In 2017, the Environmental Working Group (EWG) and North Western University’s Social Science Environmental Health Research Institute (SSEHRI) released to the public a map showing the contamination of toxic fluorinated chemicals known as PFAS around the United States, which at the time showed how PFAS-contaminated water in 27 states was in the water supplies for 15 million Americans. Today, that number is even higher but thanks to the map, awareness has also risen.

To further the project, Phil Brown, Alissa Cordner and Lauren Richter from SSEHRI and David Andrews and Olga Naldenko from EWG announced in a report that they’re branching the Mapping PFAS Contamination Project into two distinct projects:

“Our two organizations are grateful to have had the opportunity to combine our time and skill sets as we work toward an effective public intervention in the global PFAS crisis,” it said in the report.

The public awareness of PFAS contamination has been a long time coming. EWG was an early leader in PFAS research and advocacy. In 2002, EWG began publishing reports on the toxicity of the fluorinated compound PFOA, based on documents made public by environmental attorney Rob Bilott, who brought a federal class-action suit against DuPont for polluting local water supplies in West Virginia and Ohio, it said in the report.

After years of research, in 2015 EWG published a county-level map that documented known PFAS detection in U.S. drinking water. It was also in 2015 when SSEHRI became interested in tracking PFAS contamination and started working with EWG on expanding the contamination map.

“The collaboration between EWG and SSEHRI helped elevate PFAS contamination from a local and personal concern into a national crisis,” it said in the report.

“Our collaborative mapping project was publicly released at the first national PFAS Conference, in 2017, hosted by SSEHRI and organized by a committee including activists and scientists. EWG President Ken Cook gave a keynote speech to unveil the map, which at the time showed how PFAS-contaminated water in 27 states was in the water supplies for 15 million Americans.”

Today, contamination has been recorded at more than 1,400 locations in 49 states and the project has led to more than 600 news stories and more than 860,000 map views, the report said. But the map’s public release lead to arguments for greater regulations of PFAS and communities are organizing and advocating for safer drinking water.