Tompkins County in central New York has an ambitious waste diversion goal and a lot of rural property to serve. So county officials knew they had to go a little country to achieve their diversion plan.

“We’ve identified for quite a while that the multifamily dwellings and mobile home parks don’t have nearly the support for recycling programs you see with residential areas,” says Kat McCarthy, waste reduction and recycling specialist with Tompkins County Solid Waste. “We recognize the unique challenges in those areas. We wanted to reach out to communities that aren’t getting the same information we’re putting out there.”

McCarthy is based in It 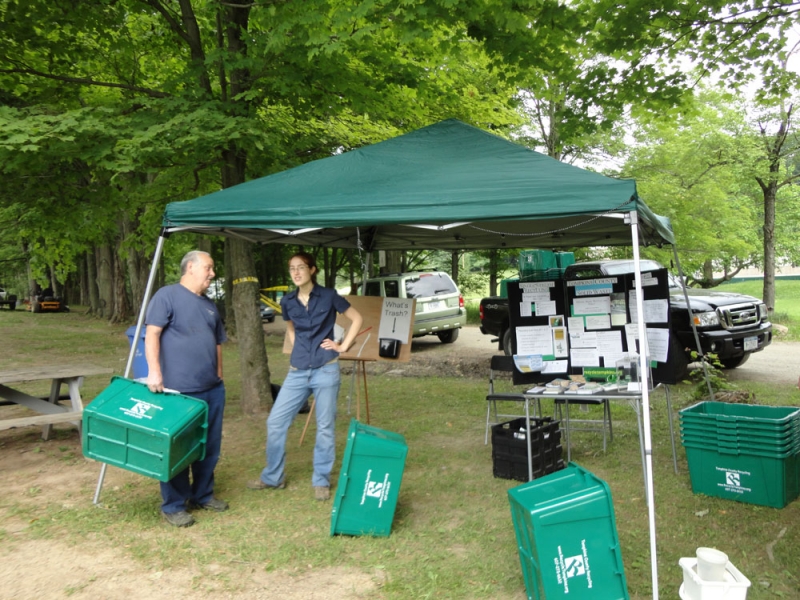 haca, home to Cornell University and the only sizeable city in the county. Tompkins County has a diversion goal of 75 percent by 2015 and is at about 60 percent now.

The county had a program partnering with businesses on green efforts, which became a starting point for working with apartment complexes and mobile home parks. But officials thought a more direct, hands-on approach would achieve better results. The county got a grant from the U.S. Department of Agriculture to start four pilot programs.

County officials met with a property manager and a resident contact at the sites (three mobile home parks and one apartment complex), McCarthy says. They gathered information on current waste generation at the sites and identified current and potential problems. The county provides curbside recycling for residents with Casella Waste Systems Inc., so they enlisted the company’s help as well to improve recycling rates. County officials created brochures tailored for each location, attended events at the locations such as Dumpster Days at the mobile home parks and provided free recycling bins.

“We were trying to create something in the community [connected] with something that was already happening,” McCarthy says.

Chip Ray is president of Jim Ray Homes, mobile home parks that host two of the pilot locations for composting and recycling in Newfield. Valley Manor has 188 residents and Shelter Valley 66. He wasn’t looking to start a program. “It has worked out good from my perspective,” he says. “It’s a way for my residents to save money.” (The county has a pay-as-you-throw program based on weight.) “The less spaghetti and eggshells in there the more other stuff you can put in for free.”

McCarthy and Ray agree that the biggest challenge with the composting and recycling program has been educating the residents. Ray says his firm has used its newsletter and Dumpster Days, and the county’s free recycling bins have been an important incentive to get people to learn about it.

“A big part is getting the word out,” McCarthy says. “What our programs, our services are, what’s available to them.” With apartment complexes and mobile home parks, or manufactured housing communities as Ray calls them, turnover can be high, which can make communication more challenging.

Ray says the logistics of finding a location for the composting bins so it wasn’t an eyesore was easy. In his locations the bins are hidden but on a main artery “so people can swing in there and get out of the car and then keep going.

“We wanted to make it as easy as possible so they’d utilize it.” 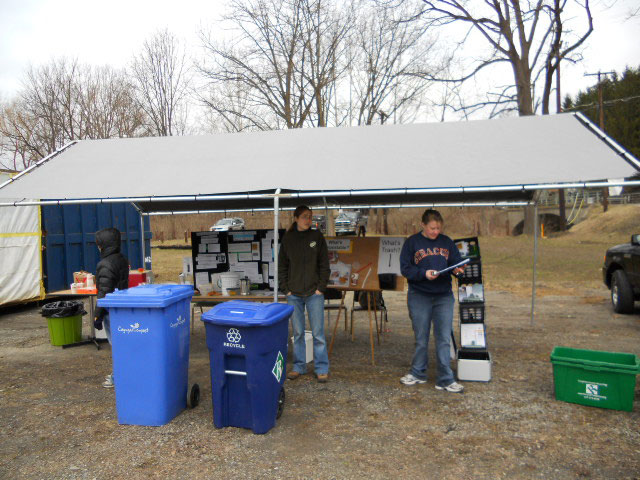 Christina Kanin, resident at the Valley Manor trailer park community and a tenant liaison for the program, says the biggest challenge for residents has been “just getting in the habit of composting. But once you overcome that it’s worth the effort.”

McCarthy says the county has tried to be sensitive to human nature. “Sometimes changing people’s minds is being more aware of not only how to do it but why should I do it, what in its for me,” she says. “We tried to encourage that participation, make financial incentives, make it convenient.”

It might not be as convenient for some of the residents that don’t leave their home frequently, but that’s the only complaint Kanin has heard. “I think it’s gone over very well.”

The county has gotten promising results. The programs are diverting one ton a month total from the four locations via composting and 20 tons a year through recycling.

County officials emphasize what they call the Four C’s of what people care about – cleanliness, comfort, convenience and making a contribution. “You want it [the diversion sites] to look appealing,” McCarthy says. “People don’t want to participate if they think it’s dirty. It’s really important to say this is actually very clean, very convenient.”

Distances with recycling and composting can be particularly difficult for rural areas. McCarthy says having the curbside recycling already established in the county made implementing the program easier.

Once the program was under way the county kept in touch with community representatives once a month to get feedback and keep the program fresh by doing something of interest each month such as providing program magnets. “We wanted to keep it on the front of people’s minds,” she says.

Relationships are key to making a program like this work, McCarthy says. Property managers can more easily make decisions about where to place a composting site and do things like create enclosures. Property manager support makes the program look official. “Then it becomes part of the infrastructure of the site rather than something that someone just decided to put in place one day.” At the Tompkins County sites the property managers were well-respected individuals that the residents will listen to.

The tenant liaison also plays an important role. “It’s nice to have a fellow resident that you can talk to. They might feel more comfortable complaining to that person or they understand where the person’s coming from.”

There are some particular advantages to having composting programs in these types of dwellings. Trailers get hotter in the summer than homes or apartments, Kanin believes, so it really helps to be able to get the food waste out of the house.

Food waste also can be more of a problem in rural areas that are woody and contain animals such as raccoons and bears, in addition to pets. “It’s so nice be able to get rid your food that animals tend to like,” Kanin says. “You get lazy and then you have to pay for it when you have to clean up your garbage because you had a skunk or raccoon get in it.” 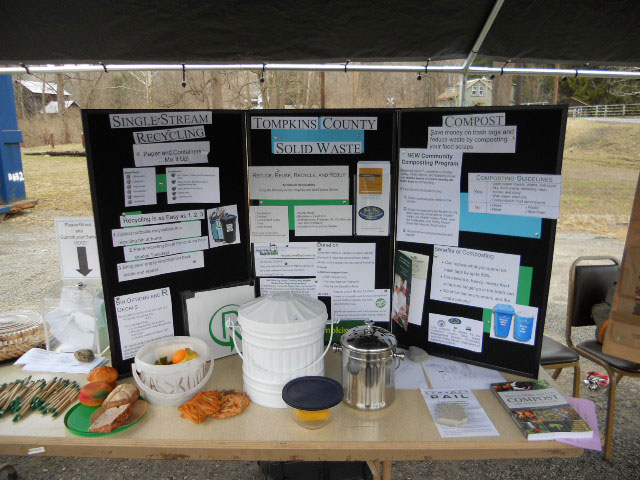 mposting also has allowed his company to ban individual composting operations at homes, which can cause problems between neighbors if the resident’s composting attracts animals.

Overall, Kanin sees the program doing long-term good. “I think it was a great opportunity for our community and something that’s beneficial to our children as well,” she says. “There’s not many places to compost, and it’s great to have the children growing up composting as well as recycling, and it saves money as well with your trash pickup.”

The plan is not only for the existing programs to continue, but Ray also added a program this summer at a manufactured housing community of 205 units in Dryden, next to Cornell. Ray’s company has picked up the cost of that program. “It’s gone over extremely well in that location as well,” he says.

Tompkins County has been happy with the results. It plans to add new locations in the county in the future. “It has turned out better than we expected,” McCarthy says. “The participation and engagement from the people we worked  with was really impressive. They really got on board with the program and really supported the property managers.”

And it’s been a morale boost for residents as well. “People really do want to make a contribution to their community where they live,” McCarthy says. “Giving them the opportunity knowing that they’re doing the right thing by composting or recycling is a pretty big benefit.”