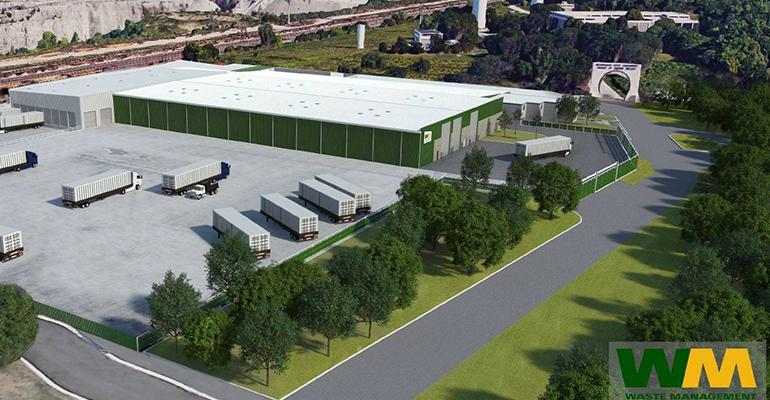 At full capacity, Waste Management’s highly automated MRF of the Future in Chicago will process roughly 1,000 tons per day.

Recycling and engineering teams at WM sat down and began designing a highly automated facility, known as Waste Management’s MRF of the Future, that would make high-quality material with the lowest labor possible.

Brent Bell, WM’s vice president of recycling, explains the idea was initially pitched to senior management as a research and development (R&D) facility. WM ended up building its new, 160,000-square-foot MRF in Chicago, due in part to its centralized location in the U.S.

And, at the time, WM had two facilities already operating in Chicago—one in the South Side and one in the North Side. But once WM decided on Chicago and started procuring the building and looking at the design, there was a fire at the facility in the South Side of Chicago. WM had to quickly decide whether to rebuild the facility or turn this new R&D center into a facility that can process materials for the Chicago area.

“So, we made the decision to go for it and convert the R&D facility into an actual operating processing facility that we could depend on daily,” says Bell. “It’s the largest investment Waste Management had made in a residential recycling facility. We’re also not completely done with it yet.”

Waste Management began testing some tons through the facility late last year and is actively running material through every day. The company expects the MRF will operate at full capacity in the third quarter of 2020.

At full capacity, the facility should be able to process about 1,000 tons per day, which would put it in the range of 21,000 to 23,000 tons per month. Today, the MRF is processing a little more than half of that and continues to ramp up.

Setting the Stage for Automation Across Waste Management

Since the implementation of China’s National Sword, recycling commodity prices have fallen to historic lows. Many MRFs across the country have upped their game when it comes to implementing advanced robotics and sorting technologies to ensure sustainable end markets for their materials.

Waste Management believes its MRF of the Future will set the stage for what the company believes a municipal recycling facility should do.

“It will be the blueprint for many other facilities we have. We have roughly 45 residential single stream facilities throughout North America,” notes Bell, adding there is a lot riding on this facility working properly. “That will mean the other facilities will have a quick path to capital investments and upgrades that we can do with our remaining 45 facilities.”

One of the most interesting things about WM’s MRF of the Future, according to Bell, is that its heavily automated equipment communicates with each other. He refers to this concept as intelligent sorting, meaning conveyor motors and optical sorters, which all print out a lot of data that historically don’t ever connect, communicate with one another and to technicians to help improve material quality and eliminate downtime. Control rooms at the MRF monitor motors and the performance of optical sorters and robotics to provide a better understanding of what’s happening in the plant from a centralized area.

For material flow, the facility contains volumetric scanners that show how much material is being distributed. So, if a certain part of the system is being overloaded with material, adjustments can be made immediately, says Bell.

“We’ll know based on the material quality and operational numbers if something needs to be looked at from a maintenance perspective way before it would cause a downtime event,” he adds. “Here, we’ll be able to notify the operational folks immediately so we can resolve those situations a lot sooner.”

According to Bell, a misconception among the general public is that artificial intelligence (AI) and robotics are displacing jobs. However, Waste Management is looking to automation to help assist its workforce since jobs at recycling facilities, particularly sorters, have extremely high turnover rates.

“For every sorting job we have, we bring in nine to 12 people to fill that exact position at that exact plant in a given year,” emphasizes Bell. “We have a lot of folks that get on the sorting line and leave after one day. It’s a hard job to fill.”

This highly automated facility has, however, opened new opportunities for workers with different skillsets—such as those working directly with the monitors, computers and optical sorters.

Although many of Waste Management’s market areas don’t necessarily have the need for a 1,000-ton-per-day facility, there are learning lessons that can be carried over from the Chicago MRF.

“While Chicago is a very large facility, we currently have two facilities under construction now in our network, and while they won’t be quite as sophisticated as Chicago, we are calling them state-of-the-art facilities,” explains Bell. “For their size and scale, they will have the best technology based on tons in their marketplace.”

Moving forward, Waste Management is looking at all its assets to see where robotics and AI can be installed to enhance processing operations.

Curbside Recycling and a Move Toward Better MRFs

“You’re seeing MRFs reinvest because they have to,” explains Dylan de Thomas, vice president of industry collaboration at The Recycling Partnership. “Most of the MRFs in the United States were built for a totally different packaging stream than what we see today. And this has been coming down the pike for the last decade plus.”

“This is the hardest possible time for a MRF to reinvest because of the economics, but it’s absolutely critical that they do to clean up the stream,” he adds. “MRFs and recycling companies are readjusting, and contracts are adjusting so that reinvestment can occur.”

But like anything in recycling, there are also MRFs that have not retooled, and it really depends on what their given economic system might be, de Thomas points out.

“Some MRFs have terrific relationships within their communities and do the best they can to provide the highest level of service they can for the communities given the contracts they might have. But in other places, they are adversarial, with some MRFs charging outrageous processing fees for the cleaning out of recyclable materials,” he adds, noting that in extreme cases, communities have been forced to make the tough decision to stop recycling collections altogether.

The Recycling Partnership recently released its “2020 State of Curbside Recycling Report,” which calls for the following integrated strategies:

“The fleet of MRFs in the U.S. is vastly diverse, with a wide spectrum of capacity and capability. But they are the critical link between a potentially growing supply of curbside-collected material and the evolving circular economy,” according to the report. “While some MRFs have invested in the future through deployment of optical sorters, robotics and paper and glass cleaning equipment, many more need extensive modernization to be able to function efficiently. Capital, technical assistance and innovation at scale would ensure that the MRF infrastructure is up for the task of massively growing material recovery.”

“As MRFs improve, so must their transactional relationships with community recycling programs,” the report continues. “The negative market issues of the last two years are being played out in bid and contract processes around the country, testing this critical symbiotic aspect within U.S. curbside recycling services. The Recycling Partnership will soon release a best management practices guidance document with recommendations designed to build healthy contracts that allow both community recycling programs and MRFs to grow and thrive.”