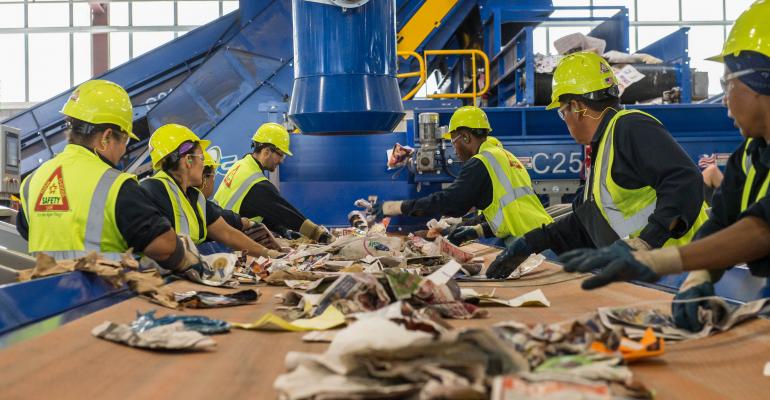 Republic Services Inc. opened a massive $35 million residential recycling center outside Las Vegas that will double the recycling capacity in the region.

The 110,000-sq.-ft. Southern Nevada Recycling Center, a project that’s been in the works for about four years, is capable of processing two million pounds of recyclable material per day, or 70 tons per hour, and is expected to double recycling capacity in the area. Overall, the facility will have the capacity to process 265,000 tons on an annual basis. The previous facility, in contrast, had about 130,000 tons of material come through in 2014, of which 90,000 was processed.

Other partners on the project include Cambridge Construction, the primary contractor, and CP Group, which designed and manufactured the equipment for the material recovery facility (MRF). The facility is the largest residential single-stream processing system in the country, according to Terry Schneider, CEO of CP.

The facility features dual sorting lines, each with a capacity to process 35 tons per hour. The setup means that even if one line goes down, the other can keep running. It also enables Republic to process different recycling streams simultaneously if necessary. Although the center will largely process residential recycling, it also has the capability to process commercial and industrial streams and is designed to adapt as the composition of the recycling stream continues to evolve.

“As newspaper goes away and there is more mixed paper, we can switch what we focus our attention on,” Schneider says. He adds that it is built as a smart system that, at any point, can provide data on the throughput and volume of residuals at the end of the cycles. “There are scales through the system,” he says. “All of that can be calculated on a constant basis.”

The capability to run the system off human machine interfaces (HMIs) or tablets is a significant change from how previous systems have been run. From tablets—on or off site—the facility’s managers will have the ability to do things like re-set screens, adjust sorters and change the speeds of motors. There are also sets of pre-programmed settings based on different “recipes” of what’s in the recycling streams. “The speed of the shafts changes, the angles of the screens change,” Schneider says. “It gives you a lot of flexibility.

“It’s convenient for the supervisor to have this information in front of you,” says Len Christopher, general manager at Republic Services. Christopher is responsible for managing the new facility. “Currently you have to do things like send guys with walkie-talkies on each side of a screen to adjust them. Now we will be able to adjust those things on the fly.”

Safety was also a major consideration in the facility’s design. The facility was designed to allow easier access to maintenance panels and for the system itself to have safeguards built in to protect workers.

In the event that a worker stops the system manually—and it is equipped with stops throughout the lines to enable this—the facility’s managers can see where the system was stopped on their HMI or tablet, pull up a live report and be able to reset the system.

“As big as this place is, it’s extremely important to have all that information readily available,” Christopher says. “You look at some of the equipment today like variable frequency drives, a lot of the motors are on these drives that allow us to ramp speed up. You don’t want to go from 0 to 60 in a split second. Things can break. You gradually ramp certain things up. … If you have a problem in current system and you have one of these drives go out, have to call electrician in, he has to pull up his laptop and program the drive in and it takes time. With the new system, you can literally reprogram a drive from an HMI or a tablet. You can pull it up, put your parameters in and you’re good to go.”

Another feature is a glass cleaning system that’s new for both CP and Republic. “The testing has been fantastic,” Schneider says. “We think we will be able to recover somewhere in the 90 to 95 percent range at the back end. It’s the cleanest we’ve ever gotten glass.”

Republic installed a learning center at the facility, which features sustainability oriented educational displays and community videos, as well as a live video stream of recycling operations. The Learning Center also offers visitors a view of the recycling process from an observation deck that sits above the center’s floor.

“What we do out there is dangerous to walk a group of kids through. You can’t do it,” Christopher says. “I want to have the ability to show people what we do and this center allows that.”

The center is the most advanced Republic has ever opened at one of its facilities, according to a company spokesperson. It will be used as a blueprint that will be evolved and adapted for other markets.

“This is a special day for people throughout Southern Nevada, especially our customers,” Tim Oudman, area president of Republic Services, said in a statement. “A recycling center of this magnitude is a bold undertaking, and reflects our community’s commitment to environmental responsibility. Southern Nevada is home to considerable natural beauty and we are truly proud to invest in its preservation.”

Other features at the center include 1,776 solar energy panels on the roof that are expected to generate enough renewable energy to fulfill 15 percent of the building’s power requirements. Inside the building, automatic low-flow water fixtures will reduce consumption by more than 20 percent.

The Southern Nevada Recycling Center is located next to an existing 88,000-sq.-ft. recycling facility. Together, they comprise the largest known residential recycling operation in North America, according to Republic.

The plant employs 160 people today, and that number could rise as capacity increases.