A Look at an Effort to Use AI to Increase Efficiency 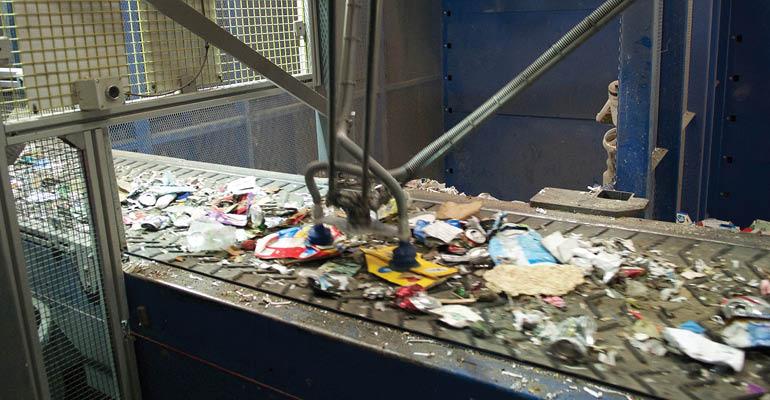 The system has the ability to calculate the number of different types of packages coming down a belt and even identify the brands and estimate the weights.

Can learning robots increase recycling efficiency? That’s exactly what the the Carton Council of North America is aiming to find out as part of  partnership with Alpine Waste & Recycling and AMP Robotics formed in late March to test the use of artificial intelligence to improve the recycling of food and beverage cartons.

AMP Robotics, headquartered in Denver, develops robotic systems for the recycling industry that remove valuable commodities from the waste stream and provide recycling facilities with actionable intelligence on the efficiency of their equipment as well as the content of their material flow.

The AMP Cortex, nicknamed “Clarke” after the sci-fi author and futurist Sir Arthur Charles Clarke, was built using the latest results in artificial intelligence. The system isn't so much programmed as it "learns" from experience.

“We've shown it thousands of examples of bottles, cans, and the other material on the container line and it has figured out how to distinguish cartons from the other material,” says Matanya Horowitz, founder of AMP Robotics. “It's also learned things like logos, shapes and printing on packaging.”

Mechanically, Clarke’s spider-like arms have specially designed grippers that are able to pick up and separate food and beverage cartons, in a wide variety of shapes and forms, flattened or partially flattened or in their original form.

This technology initially came about in 2012 when robots were able to not only understand, but also learn from their surroundings. It’s the same technology utilized in self-driving cars and is known as “machine learning.”

The system uses visible-light cameras to feed images to a computer. The computer uses advanced machine learning algorithms to recognize items on a belt. It has the ability to calculate the number of different types of packages coming down a belt and even identify the brands and estimate the weights.

“The system is constantly improving. The more the system ‘sees’, the better it gets at identifying objects,” says Horowitz.

The Carton Council is composed of four carton manufacturers, Elopak, SIG Combibloc, Evergreen Packaging and Tetra Pak, as well as an associate member, Nippon Dynawave Packaging. Formed in 2009 and based in Denton, Texas, the council works to deliver long-term collaborative solutions in order to divert valuable cartons from the landfill.

“We are excited about this pilot and the success it has already demonstrated,” says Derric Brown, director of sustainability, Carton Council of North America and Evergreen Packaging. “Ultimately, we hope to duplicate the success … at other MRFs as an innovative, cost-effective, long-term solution to sort cartons.”

The council and Denver, Colo.-based Alpine Waste & Recycling have had a longstanding relationship—since the days when Alpine became the first recycling company in Colorado to accept food and beverage cartons in the single stream recycling process.

With the council funding the pilot, AMP developed the technology and has been responsible for its operation and performance, while Alpine hosted the system.

“In bringing this technology from the lab and into the MRF environment, it was clear just how many pieces to the system needed to be optimized and strengthened,” says Horowitz. “Throughout this process Alpine provided continuous on-the-ground support for the system, actionable feedback to help improve it, and an eagerness to support the development of the technology in any way it could.”

Alpine has been using this particular robot for a few months, relying on it more heavily as the technology continues to improve.

“Clarke gives us a number of options as we strive to make the recycling/sorting process more and more efficient at Alpine Waste & Recycling. Now that we are comfortable with the robot’s performance, we feel confident in letting the equipment handle the entire carton-sorting role,” says Brent Hildebrand, vice president of recycling at Alpine Waste & Recycling. “That means we can move personnel to other areas of the recycling facility as needed. The robot also gives us a sense of security that when the labor pool becomes thin (as it has recently), at least ‘Clarke’ has us covered while we recruit people.”

Hildebrand says that other recycling companies can experience the same benefits that they have so far at Alpine.

“From Alpine Waste & Recycling’s perspective, we don’t see why the technology would have to be limited to cartons. The optics would probably be a key component, since most (but not all) of our sorting equipment is non-optical,” he says.

From an industry standpoint, Brown says this innovation can help MRFs start sorting new packaging that is recyclable but has lower volume, helping to divert more materials from landfills. The system can be added to existing recycling equipment and takes up little space.

Additionally the robot has a grab rate of 60 picks per minute, considerably more than a human’s average 40 picks per minute. It can operate around the clock without interruption and requires little maintenance.

“The technology has wide spread implications for the recycling industry as it can be adapted to other materials, including those considered hard to sort due to low volume in the recycling stream,” Brown says. “In addition, it has the possibility of being trained to pick out materials that cannot be recycled and generally contaminate other recyclables as long as it is adapted with special grippers. Contamination is one of the biggest challenges the industry is currently facing.”