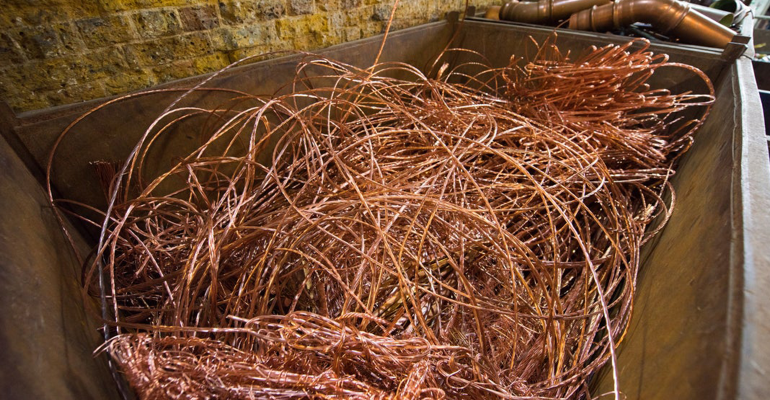 Metals can be recycled repeatedly, making them a desirable commodity.

Used food and beverage containers such as aluminum cans comprise the largest portion of metal recovered from residential households. However, supply chain disruptions and demand shifts have caused shortages and a rollercoaster of market conditions.

Shortages of critical base materials, rising commodity prices and difficulties in transporting the products all contributed to changes in metal manufacturing in the last year and a half, said Joe Pickard, chief economist and director of commodities, Institute of Scrap Recycling Industries (ISRI) in a recent event hosted by the Southeast Recycling Development Council.

"The new surges of COVID-19 are adding to pandemic related issues such as worker absenteeism, short term shutdowns to depart shortages, difficulties and filling open positions and overseas supply chain problems," he continued. "And, again, this is common across the manufacturing sector and certainly for recyclers, as well. So we're seeing positive manufacturing growth, but a number of headwinds that we continue to face."

Pickard pointed to JP Morgan's Global Manufacturing PMI, which was at a six-month low in August 2021. Manufacturing continues to expand, but at a slower rate because of supply chain constraints. The Delta variant has led to additional COVID-related shutdowns in China and other economies.

Despite wavering economic conditions, there has been strong manufacturing output for most metals, including global steel productions. This goes hand-in-hand with an increase in increased scrap metal consumption, Pickard said.

The United States saw a 19% increase in steel production in July. Pickard noted that "this is critical for ferrous scrap consumption that we're processing in the country."

About 80% of ferrous metals processed in the United States are sent to domestic producers such as steel mills and foundries. The remainder is exported.

Global demand for U.S. recycled commodities has been recovering in the past year, despite a dip in 2020 due to market and supply chain issues. Pickard explained that the increase in physical demand for recycled metal combines with the rise in price levels has caused the value of scrap exports to ascend far more "dramatically" than the volume of exports.

"If we look at the first half of 2021, all U.S. scrap exports combined - including ferrous and non-ferrous metals, paper, plastic and so on - was up 15% in terms of quantity," he said. "If you look at it on dollar basis, exports were actually up 62% to more than $15 billion through June. And we see that across the metals too."

U.S. exports of recycled iron and steel were up 11.5% by quantity to 8.8 million metric tons in the first half of the year, or up 69% to $3.3 billion in monetary terms. The United States is seeing a rise in demand for ferrous scrap from China as the country focuses on bolstering domestic usage of ferrous scrap for iron and steel production.

"As you may have seen from some of the headlines and press reports, China has announced pretty ambitious goals in terms of ferrous scrap consumption by 2025," Pickard said. "They want to increase ferrous scrap use by 23%. That would be consumption about 320 million tons in 2025."

The U.S. has seen demand for imports as well. All scrap imports into the United States in the first half of 2021 were up 54% by value to nearly $5 billion on increased volumes of every metal including steel, aluminum, copper and other scrap metals.

Pickard examined the global drivers for demand for recycled metals, noting that the U.S. has seen recycled aluminum exports rise about 15% in 2021. This is due in part to "significant gains" in Malaysia, Canada, India, Hong Kong and China.

"That comes as China has implemented new guidelines for high-quality recycled copper imports," Pickard said. "And we're seeing continued strength in shipments of recycled copper to mainland China including most of the high quality grades - #1 and #2 copper included."

Export markets have significantly influenced the market for copper in terms of domestic pricing, "as compared to ferrous where the domestic export ratio is about 80/20," he said.

In previous years, the ratio for copper and copper alloy scrap has ben 50/50 in terms of how much stays in the United States and how much is shipped for oversea consumption.

Pickard concluded with expectations with an overall economic outlook. He discussed the Federal Reserve's projections showing the country is ripe for positive domestic growth as well as demand for recycled panels. Overall gross domestic product (GDP) growth is estimated at 7% in 2021 and is expected to slow to 3.3% in 2022 and 2.4% in 2025.Unemployment rates are expected to decline.

"He stressed kind of three major points: one that jobs are recovering, but that we still have a long way to go. That inflation is high, but that the Federal Reserve remains confident that that inflation is transitory or just for a short period of time. And then finally that they actually might start their tapering, which is declining bond and mortgage-backed security purchases by the end of 2021," Pickard said.