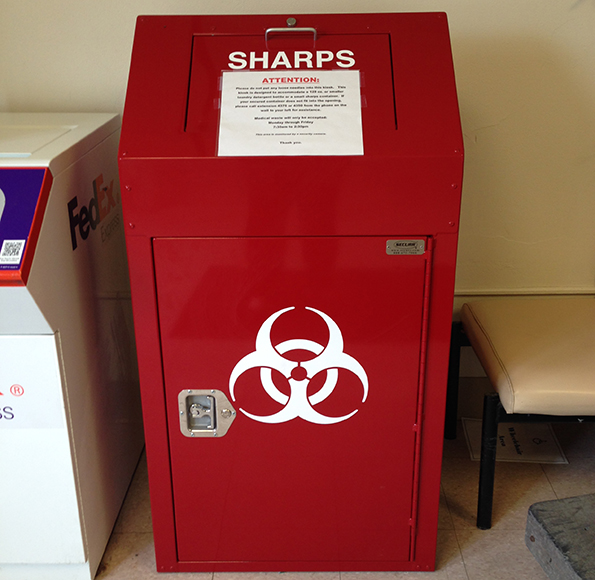 Among the more serious hazards for solid waste and recycling personnel is improperly disposed of needles and other sharps in garbage. Accidents with sharps can expose workers to bloodborne pathogens and to diseases.

While the program has been accepting home medical waste from the community for more than 14 years, in April a sharps kiosk was added to the program, says Samaritan’s Emergency Management/HazCom Coordinator Stephen Falk. “We just recently purchased a sharps kiosk, which makes it more user-friendly to our community.”

Residents drop the waste directly to the kiosk. It doesn’t get handled by any employees until it’s handled and processed in a Rotoclave, a large 400-pound to 500-pound capacity rotating autoclave for cleaning and sanitizing needles, sharps and other medical devices.

People with illnesses such as cancer and diabetes, regularly use lancets, syringes and needles in their homes and it’s important that they dispose of these sharps appropriately. The Environmental Protection Agency estimates that 9 million people in the U.S. use sharps at home. That produces 3 billion disposable needles and syringes and 900 million lancets each year.

The need is real in the communities near the main medical center in Watertown, N.Y. where 200 points to 300 pounds of household medical waste per month are collected, says Falk. The state of New York legislates hospitals and medical centers provide the public with these types of free collection programs. The community is responding.

“It’s been very positive,” says Falk. “They like it. There are a lot of people—diabetics—who are administrating healthcare at home. They are using syringes and lancets. Lancets to test the blood sugar and syringes to administer their insulin. And all this generates a lot of waste and if not handled properly, it could expose not only sanitation workers, who handle garbage where we don’t want it to go, but the community as well. ... By having this program in place, it prevents that from happening,” he says.

In some instances, patients are not educated about proper disposal. Others may have access to pick-up by medical waste haulers, but may not be aware of the service or it may be cost prohibitive. As a result, many sharps used in at-home care are discarded in trash or recycling, which puts those workers at risk.

“In hospital settings, sharps disposal is controlled. Designated containers and locations for sharps disposal are established and maintained. These containers are then managed as medical waste,” Anne Germain, director of waste and recycling technology for the National Waste & Recycling Association has said.

“With household sharps usage however, it is like the Wild West. Much of the problem likely rests with public confusion. When they place their sharps in a container normally designated for recycling, it may seem contradictory to then place that container in the trash,” she said.

The FDA also warns that loose sharps should never be thrown away in household or public trash containers, toilets or recycling bins and a person who is accidentally pricked by a discarded sharp is at risk of exposure to such blood-borne viruses as hepatitis and HIV.

With the Samaritan program, people managing their healthcare at home have three simple options for drop-off. The main medical center, where the new sharps kiosk is located, and two other Samaritan locations in Watertown accept household medical waste.

Samaritan recommend needles be put into a sturdy durable container like a laundry bottle made of heavy duty plastic that is less likely to puncture than milk jugs or other thin plastic that not suitable for the job. The laundry jug or a sharps container that hold about one gallon is about the maximum amount that will fit into the opening of the kiosk, adds Falk. Any larger won’t be able to fit.

“It’s a good community service. The community appreciates it and they use it,” says Falk.