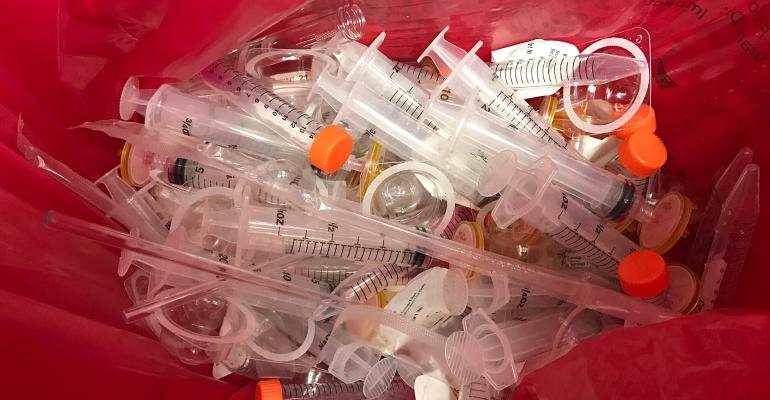 Some health systems are making progress in recovering medical devices and equipment.

About 85 percent of hospital waste is noninfectious, according to the World Health Organization, and a bulk of that is recyclable, yet most of these materials are either landfilled or burned.

The waste is stockpiling because balancing patient safety, cost and sustainability is not easy, say hospitals. Further, haulers and recyclers often shy away from what’s considered medical waste. And China’s crackdown on imported plastics has created a new barrier—25 percent of hospital waste is plastic, amounting to 1 million tons a year, reports Healthcare Plastics Recycling Council.

“Reprocessing medical devices is easy. There are established programs where we send them to third-party reprocessors and get a rebate or repurchase at a reduced cost,” says Katie Wickman, sustainability manager for Chicago-based Advocate Health Care. “There are also donation programs enabling us to send a lot of materials we can’t use overseas to healthcare providers with limited resources. But recycling is where it gets tricky.”

Space, education, time and energy required of hospital staff to make the programs work are among the challenges.

Still, last year, Cleveland Clinic managed to recycle 33 percent of its waste across all its facilities. Among the 35 materials it tracks and recovers are metals, linens and rechargeable batteries. Hewlett Packard disassembles and recycles the clinic’s end-of-life electronics. Working with another vendor, the health system has recycled more than 4,000 tons of paper, and, in its peak year, it recycled 194 tons of clinical plastics including tough ones like film and rigid plastics.

“We are retooling the [plastics] program where while we used to ship off site for sorting, we will be doing this in-house, as the law used to allow us to employ a given number of people with disabilities to sort, but the regulations around this have changed,” says Jon Utech, senior director of Cleveland Clinic’s office for a healthy environment.

Meanwhile, the list of accepted materials changes fast. Especially lately with China’s new policy on imported materials, which has meant revamping education for staff, who typically are expected to learn sorting systems involving at least six or seven bins.

Key to Advocate Health Care’s education effort has been starting small with a few easily recycled items and clear instructions, then adding more items over time.

Still, haulers are reluctant to take some materials.

“They are concerned items could be hazardous that typically aren’t. We generally lean toward not including them, as this is a partnership and they have to trust what we send is clean and recyclable,” says Wickman.

Then, there are technical barriers tied to hard-to-recycle materials.

“Our biggest challenge is film, and we create a lot of it. Any hospital supply that would be sterile has to be in a container, which is usually made of flexible film,” says Wickman.

There is an early focus on designing products and processes to ensure products meet stringent infection control requirements while reducing or eliminating waste.

Nonprofit Practice Greenhealth is working to help hospitals divert more, especially in operating rooms where 30 percent of the waste is generated. Sometimes this is due to changing medical procedures.

“Medical supplies coming into the operating room are fairly standard for a given facility, but over time, kits include what they can’t use anymore. We work with hospitals to reformulate so instead of routinely tossing clamps, gauze, sponges or devices, they change these kits to include only what clinicians need,” says Cecilia DeLoach Lynn, director of performance and sector recognition at Practice Greenhealth.

“Sterilization wrap and other packaging can be targeted as they are easy to identify and keep free from patient contact. And since operating rooms usually generate the most waste, this is where to identify ‘low-hanging fruit,’” she says.

But one of the biggest issues is moving a large, consistent stream from hospitals to processors who will consolidate it and create a feedstock that can be compounded for a higher use, according to Robert Render, commercial manager at Skokie, Ill.-based Ravago Recycling Group. This is especially so with healthcare plastics that the company buys, creating compounds from the scrap that are used to make containers, auto parts and other materials.

“It’s getting the supply chain in place that will make this work, which will entail convincing hospitals to collect these high-value materials and convincing processors to create consistent products someone will want to buy,” says Render.