First, Do No Harm

Can hazardous waste handlers improve on pharmaceutical waste disposal or are their incursions merely attempts to fix what isn&rsquo;t broken?

The first step in disposing of pharmaceutical waste is to separate the hazardous waste from the non-hazardous. At a health care facility, staff has traditionally done that sorting. But Clean Harbors Inc. recently began offering to handle the sorting for health care providers. Will the availability of a service like this change pharmaceutical waste collection?

Clean Harbors calls its new service the One Container Program since it enables medical waste generators to dispose of all waste in one bin. The Norwell, Mass.-based hazardous waste company custom designs the program depending on how much the generator wants it to do.

The sorting of pharmaceutical waste requires extensive staff training and effort, the company says. The biggest danger is a slip-up that will land a health care operation in violation of the U.S. Environmental Protection Agency (EPA) Resource Conservation and Recovery Act (RCRA). Non-compliance with RCRA rules can result in fines of up to $37,500 per day, per incident.

“Our research shows that between five and 40 percent of hazardous pharmaceutical waste is misclassified as non-hazardous,” says John Kelsey, vice president, pharmaceutical, biotech and health care for Clean Harbors. “That means that a state or federal inspection on any given day at virtually any health care facility in the country will reveal misclassified hazardous wastes that could result in regulatory action.”

Kelsey, in an email interview, also points out the challenges of managing compliance with health care staff. There are the issues of training, staff turnover and confusion over what is considered hazardous under RCRA. There also is the issue of items that are not on the RCRA hazardous list but have hazardous characteristics, such as the blood thinner Heparin.

Industry experts, Kelsey says, claim only 15 to 20 percent of hospitals and a much smaller amount of other health care facilities have active pharmaceutical waste disposal programs in place that meet EPA disposal guidelines. There also are growing environmental concerns surrounding unacceptable levels of pharmaceuticals in groundwater.

In addition, health care providers are usually working under time pressure and stress. “Often times the pharmaceutical is going into the closest container, no matter what color code it is,” Kelsey says.

The Cost of Freedom

“It’s an interesting concept, I’ll give them that much,” says Hal Miller, general manager for Larson-Miller Medical Waste Disposal Service, a Bountiful, Utah-based  firm that collects, transports and treats regulated medical waste in the Northwest United States. “We probably have a disagreeing opinion with the one-bucket solution because hazardous waste is more expensive to dispose of than non-hazardous waste, so in doing that you add cost to the program.” 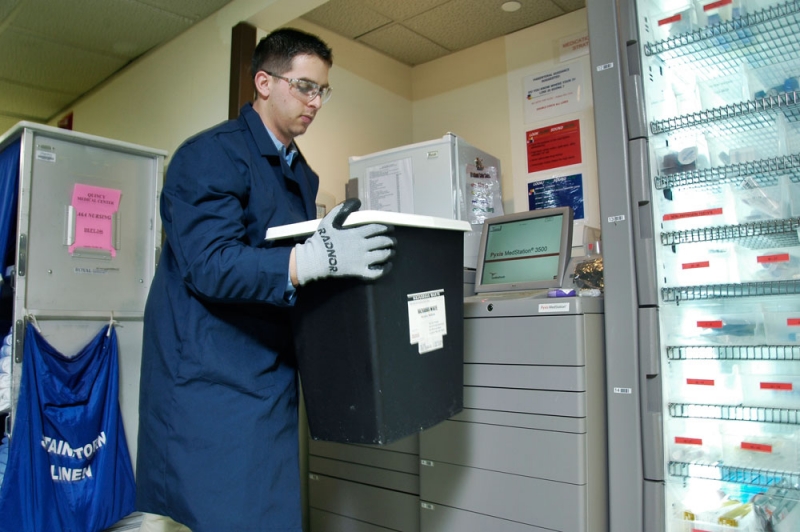 Clean Harbors owns five of the nine hazardous waste incinerators in the United States so it makes sense for them, he says. “But the generators have to understand that it does go against their total hazardous waste that they generate for the month, so it could move them from a small to a large status generator.”

Kelsey counters that the Clean Harbors program is “close to cost-neutral” because of the company’s access to hazardous waste incineration technology. A typical medical waste company has to separate out the hazardous waste materials and send them to a separate processor for disposal, as well as process the non-hazardous material. “The added premiums for all the extra handling and brokering can really add to the cost,” he says. “We own all the steps in the process so our blended cost for incinerating all the pharmaceutical waste in one of our hazardous waste incinerators in practically cost-neutral.”

Smith adds that there also has to be some segregation for waste such as pressurized aerosol cans. “If you have to do a little segregation then perhaps you look at doing a little more complete segregation, to be more cost-effective.” 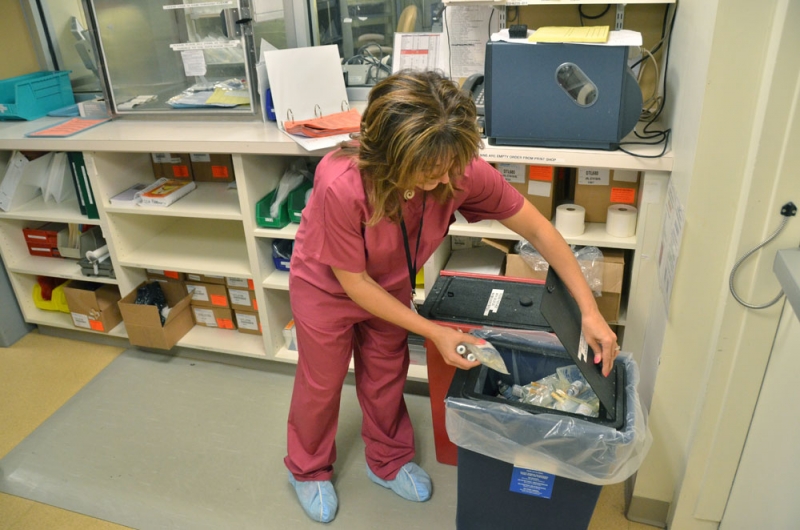 If you have to do some segregating of the waste anyway, it might be more cost-effective to do complete segregation yourself.

Waste Management’s approach, Smith says, is to provide the health care team – pharmacy, nursing, environmental services – enough information to understand the regulatory basics, respond to an audit and design a program “so employees can do what they need to do but don’t need the whole technology behind it.” This education includes an initial list of which drugs need to be segregated and which can be combined, shelf labeling for pharmacies, and information technology messaging for the nursing staff.

“With that level of information it’s not that difficult to train nursing [staff],” Smith says. “If you don’t take the time to institutionalize the process and embed it in the culture, it doesn’t stick.”

Miller contends most health care generators are fine with doing the separation themselves. Larger facilities have staff assigned specifically to monitor waste compliance, and a lot of smaller facilities are exempt since they don’t deal with the hazardous pharmaceuticals. “Most [healthcare providers] are happy. They’ve been doing the sorting for years. It’s not that big of a deal to them.”

The greater challenge may be posed by smaller health care facilities and home-generated pharmaceutical waste. “It’s cheap and easy to flush it down the toilet, but not the best solution for environment,” says Miller. His company works to help educate generators on proper disposal.
Sharps Compliance Inc. works more on the retail end of pharmaceutical waste collection and processing. The Houston-based company provides takeaway envelopes for major pharmaceutical retailers such as CVS and Walgreens to sell to customers to mail back unwanted prescriptions for Sharps to incinerate, says David Tusa, Sharps president and CEO. The company also provides customer drop-off boxes, which are more preferred by independent pharmacists.

Tusa, whose company’s primary business is syringe processing, says the biggest challenge he sees in the pharmaceutical waste business is allowing for alternative means of transportation for controlled substances. Only about 3 to 4 percent of medications are considered controlled substances, Tusa says, but it’s a significant challenge because now the Drug Enforcement Administration (DEA) doesn’t allow shipment by means such as mailing. If the DEA approves a change,  “That will be very helpful to the industry,” he says. “It will give more flexibility to collect.”
Kelsey says there are only a few items that need to be separated in the black collect-all container, including DEA narcotics, inhalers and aerosols, cylinders, arsenic trioxide and silver nitrate. Those materials, which account for less than 0.5 percent of pharmaceutical waste, typically have specific disposal procedures for each Department of Transportation exception. The hazardous pharmaceutical material must be incinerated, but Clean Harbors works with the generator to recycle it when feasible.

Clean Harbors also has worked with EPA to make sure its programs are in compliance. But as Miller points out, EPA regulations cover only that roughly 5 percent hazardous part of the pharmaceutical waste stream.