Academia and private sector researchers are examining anaerobic digestion (AD) closely to find ways to maximize its growth, as evidenced by a session on the topic at the Global Waste Management Symposium (GWMS).

Academia and private sector researchers are examining anaerobic digestion (AD) closely to find ways to maximize its growth, as evidenced by a session on the topic at the Global Waste Management Symposium (GWMS).

A study of the lifecycle of commercially generated food waste looked at how AD and other waste management methods reduced greenhouse gas (GHG) emissions and fossil fuel use, says James Levis of North Carolina State University, at the June 22-25 meeting in Orlando, Fla. The study also looked at waste to energy (WTE), composting and landfills.

AD coupled with WTE led to the lowest GHG emissions and offset most of the fossil fuel use, he says. “That makes sense because both of those processes are designed to recover as much energy as possible.”

Measuring methane yield, WTE outperforms any AD combination. “This kind of makes sense because AD is reliant on methane generation, so if you have this low methane yield, AD doesn’t look so good.” 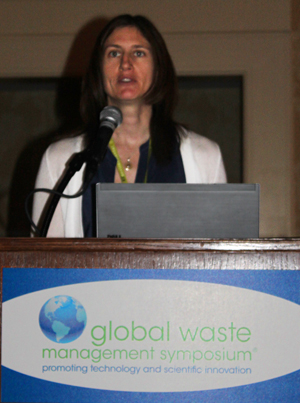 Amy Knight Civil and Environmental Consultants Inc. talked about getting an AD project permitted. The pilot AD project example is proposed for the Crappo Hill landfill in New Bedford, Mass. It was prompted by the pending state ban on some food waste.

She was involved in exploring three possible applications of the digestate: Inject it directly into the landfill; using it as a substitute for water; or adding to existing composting operations.

The Massachusetts Department of Environmental Protection (DEP) eventually approved the options, she says, but expressed concerns that needed to be addressed.

With the injection option the agency worried about soil saturation and injection rates. With adding to existing compost operations the DEP asked about material delivery and the process chemicals required. And with the water substitution, which includes the use of a Posi Shell, the main concern was odors.

Eventually the DEP approved the project, asking for periodic testing of the digestate, Knight says. The pilot program, which will take in 12 tons of waste a day, is expected to begin in October.

Paige Wilson of Colorado State University reported on work she was involved in studying hydrolysis seeding methods for multi-state AD.  As Colorado has a shortage of water, there’s particular value to using as little as possible, she says, and leachate bed reactors are increasingly used to save on water.

The experiment looked at developing microbial inocula that achieve high hydrolysis rates under conditions of high ammonia and salinity. The microbial communities were acclimated to these conditions over several months and could be used to seed reactors at startup.

“The acclimation period for these organisms is longer than batch digestion times,” she says. “These results indicate that a high amount of inoculums could be needed to achieve maximum performance.”