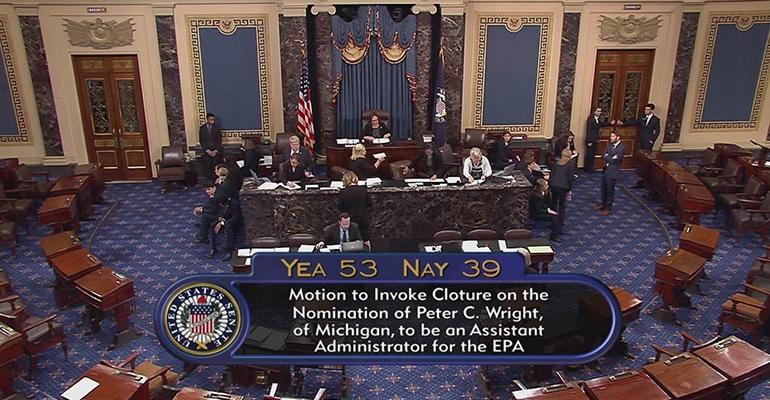 After a 493-day delay and opposition from Senate Democrats, the Senate approved the former Dow Chemical lawyer to head EPA’s Superfund and waste programs.

Wright’s approval, however, did not come without controversy and opposition from Senate Democrats. Some Democratic Senators claimed Wright and the EPA haven’t done enough to address contamination from per- and polyfluoroalkyl substances, known as PFAS, in drinking water across the U.S., Bloomberg reports. PFAS compounds could cause adverse health effects, including developmental harm to fetuses, testicular and kidney cancers, liver tissue damage, immune system or thyroid effects and changes in cholesterol, according to the EPA.

In March 2018, President Donald Trump selected Wright to serve as assistant administrator for land and emergency management at EPA. Wright has been a corporate lawyer at Dow Chemical Co. since 1999.

“I congratulate Peter and thank Leader McConnell and Chairman Barrasso for helping secure the confirmation of such a qualified nominee who has spent his entire career finding solutions to environmental contamination,” said EPA Administrator Andrew Wheeler in a statement. “It’s unfortunate that Senate Democrats delayed his confirmation for 493 days, leaving EPA without the head of its emergency response and land management office. It’s a shame we had to wait this long to get a good and highly qualified man like Peter into a critically important public service position.”

“NWRA congratulates Assistant Administrator Peter Wright on his confirmation. We value industry-government partnerships, and we look forward to working with him on issues important to the waste and recycling industry,” said NWRA President and CEO Darrell Smith.

Following a 52-38 Senate vote, Wright will have to be sworn in at the Environmental Protection Agency before he can officially take on the job. He had been working at the EPA as special counsel in the administrator’s office while awaiting Senate confirmation.

The EPA needs an assistant administrator to prioritize the cleanup of thousands of Superfund and brownfield sites around the country, Sen. John Barrasso (R-Wyo.) said on the Senate floor before the vote.