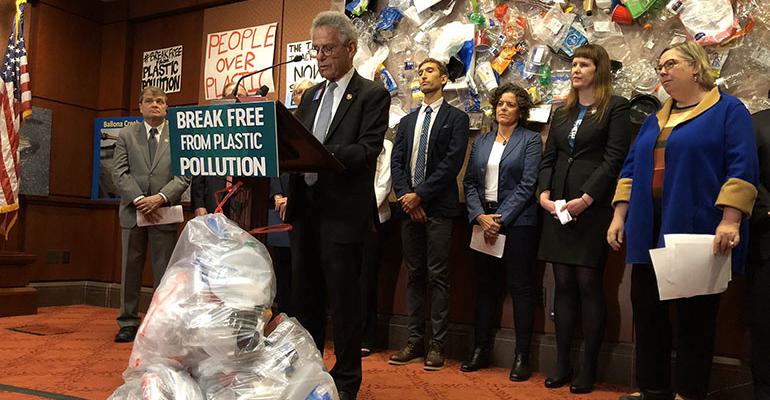 The Break Free From Plastic Pollution Act (BFFPPA) features many components, including:

“The plastic pollution crisis is past the tipping point: our communities, our waterways and even our bodies are at risk,” said Udall in a statement. “We are already bearing the cleanup costs of mountains of plastic waste, and it will only get worse for future generations. We have a responsibility to act now before the overwhelming public health, environmental, climate and economic effects of plastic pollution reach the point of no return. Our solutions are not only possible, they are practical and are already being implemented in cities and states across the country, including in my home state of New Mexico. But we need a comprehensive, national strategy to tackle this tidal wave of pollution before it is too late. We must drive the innovation necessary to break free from this unnecessary, toxic waste stream that is also accelerating the destruction of our planet via climate change. This bill calls on all of us, from companies to communities, to address this crisis head-on so that we can create a plastic pollution-free world.”

“After decades of treating our land, waterways and oceans as plastic waste dumping grounds, we now face a global plastic pollution crisis,” said Lowenthal in a statement. “Recent scientific studies show that plastic waste particles are now found everywhere we look—in the soil, in the rainwater, in the food chain and even inside our own bodies. Our legislation applies one of the core principles of environmental law: ‘the polluter pays.’ It is time for multibillion-dollar companies to step up and cover the costs of cleaning up the waste from their products. As a major exporter of plastics waste, we also have a responsibility and a duty to address this problem. We are running out of time to deal with this crisis of our own creation, and this legislation is a bold first step on the path to implementing lasting solutions.”

Over the past few months, the proposed legislation has received support from various individuals, companies and nonprofits. The Container Recycling Institute (CRI), for example, provided its expertise on container deposit laws, which enable consumers to return empty bottles and cans to a recycling location and get back the 5-cent, 10-cent or 15-cent deposits they paid upon purchase.

“A national bottle bill would introduce the most effective beverage container recycling system available throughout the nation, while bringing much-needed modernization to the process,” said CRI President Susan Collins in a statement. “The 10 existing deposit laws, while very valuable, are all independently designed and operated, with inconsistencies in deposit amounts and types of beverages covered. The 40 non-deposit states have a myriad of recycling programs with varying degrees of effectiveness, but overall they have very poor beverage container recycling results.”

The Product Stewardship Institute (PSI) worked closely with staff from Udall's and Lowenthal’s offices to put EPR at the center of the bill for all packaging. PSI developed a packaging EPR model that was used to develop the EPR section of the federal bill, as well as inform packaging EPR bills in multiple states.

“Under product stewardship, producers share in the responsibility for properly managing their products across the entire lifecycle,” said Scott Klag, senior planner for Oregon's Metro and vice president of PSI's Board, in a statement. “It's not only a more sustainable solution, it's more equitable because it puts the cost on those who produce and consume packaging.”

Oceana, an international advocacy organization dedicated solely to ocean conservation, also expressed its support of the legislation and its concern about the projected number of plastics expected to pollute the oceans by 2050.

“It’s high time for companies to do more than just say they will recycle. Plastic pollution has become one of the greatest threats to our oceans. This bill would finally tackle the plastic crisis at its source by reducing the amount produced in the first place, and encouraging a shift to refillable and reusable alternatives,” said Oceana Chief Policy Officer Jacqueline Savitz in a statement. “We need to turn off the faucet, not just run for the mop. Without federal action, the plastics industry will continue to pump increasing amounts of single-use plastic into the market, leaving taxpayers and local governments to clean up the mess. We applaud Sen. Udall and Rep. Lowenthal on their leadership in protecting our oceans and our future by addressing the plastics crisis at the source, with real solutions that our country, and our world, so desperately need now, before it’s too late.”

Despite this support, the proposed legislation has raised some red flags. One of the waste and recycling industry’s leading associations, the National Waste & Recycling Association (NWRA), for example, has written letters to Congress as well as Udall and Lowenthal highlighting its concerns.

In August 2019, NWRA sent a letter to Congress stating it believes that the proposals outlined would lead to more contamination of the recycling stream, and instead, Congress should focus on policy initiatives that would expand the domestic recycling market and encourage minimum recycled content for products.

“There are better ways to address the issue of reducing plastic waste pollution than by product stewardship or extended producer responsibility financing schemes,” said NWRA President and CEO Darrell Smith in a statement. “We have concerns that this legislation may put enormous pressure on our materials recovery facility infrastructure, which could result in increased contamination. Incentivizing entities to make significant investment in domestic market development would have the potential to create greater stability in the existing recycling infrastructure and spur the development of domestic processing facilities.”

A few months later, in November 2019, NWRA responded to a request for input from Udall and Lowenthal, stating it appreciates the addition of language pertaining to minimum recycled content; however, the inclusion of a national container deposit or federal “bottle bill,” the “one-size-fits-all approach to recycling collection” and the potential that this bill will lead manufacturers to label items as recyclable even though there is no market for the materials leads the association to oppose the bill.

“We can achieve the same end of reducing plastic waste pollution by encouraging more recycled content in the manufacturing of plastic products, improving products through better consumer product and product packaging designs and by providing tax and other incentives to promote the development of new domestic markets and increased domestic recycling capacity,” wrote Smith in the letter.

“Congress should move forward with legislation encouraging use of minimum recycled content to bolster the domestic market for these commodities, incentivizing increased domestic recycling capacity and providing resources for localities to better educate their citizens on what their local recycling programs can process,” continued Smith.

NWRA has continued reaching out to Udall and Lowenthal in the new year, sending another letter on February 7. In the letter, Smith continues to raise concerns NWRA has, and he asks for the opportunity to meet with the offices’ relevant staff members to discuss these concerns.

“As we stated in relation to the previous discussion draft that was shared with us, the addition of language pertaining to minimum recycled content as NWRA advocated for during the initial comment period is a positive step,” wrote Smith in the letter. “We believe that this, along with other incentives to generate markets for domestic recyclables and increase domestic recycling capacity, as well as providing resources for localities to better educate their citizens on what their local recycling programs can process, are the answers to eliminating plastic pollution. Other aspects of the bill, though, are counterproductive to the overall goal and negate whatever good may be accomplished by way of it.”

NWRA told Waste360 that leaders of its staff are meeting with two lead staff members from Udall’s and Lowenthal’s offices this week to discuss its concerns and provide alternative solutions.

The American Chemistry Council also raised concerns in a statement, writing, “Suggestions, such as a moratorium on new plastic facilities, would limit domestic manufacturing growth, as well as jobs, tax revenues for local communities and other valuable benefits economic development provides. A moratorium would also affect the availability of plastic for all uses, including those which save finite resources and reduce greenhouse gas impacts. Plastics make our cars lighter and more fuel efficient and our homes more energy efficient while significantly lowering our carbon footprint. Plastic packaging enables food to be transported more efficiently and reduces waste. An award-winning study by the firm Trucost found that replacing plastics with alternatives in common packages and consumer products would raise environmental costs nearly fourfold. Thus, the moratorium and bans on plastic products are likely to increase environmental impacts.”

Another leading industry association, the Solid Waste Association of North America (SWANA), is also paying close attention to the language of the legislation and what it would mean for its members and the industry as a whole.

“SWANA is closely monitoring the impending release of the Break Free from Plastic Pollution Act and is in contact with congressional staff and others about this legislation and other recycling-related bills currently being considered by Congress,” SWANA Executive Director and CEO David Biderman told Waste360. “We provided comments in late 2019 on the ‘principles’ associated with the BFFPPA and will likely take a position on it after we have reviewed the bill with our members. SWANA strongly supports congressional legislation to provide funds to local governments and others for education and expanding domestic markets for recycling.”

The introduction of the Break Free from Plastic Pollution Act comes on the heels of other recycling-related bill announcements, such as the Save Our Seas 2.0 Act, which addresses the plastic debris crisis threatening coastal economies and harming marine life; the Recycling Enhancements to Collection and Yield through Consumer Learning and Education (RECYCLE) Act, which aims to increase both the quality and quantity of recycled materials; and the Realizing the Economic Opportunities and Value of Expanding Recycling (RECOVER) Act, which would allocate $500 million in matching federal grants to states and municipalities to invest in improving recycling programs and infrastructure.

And while all of these bills could have a major impact on the recycling industry and materials at the end of their lifecycle, Udall stresses that the Break Free from Plastic Pollution Act is the "only bill in Congress that deals with the source of the problem."

Waste360 will continue to provide updates on the Break Free from Plastic Pollution Act and other industry-related bills as information becomes available.