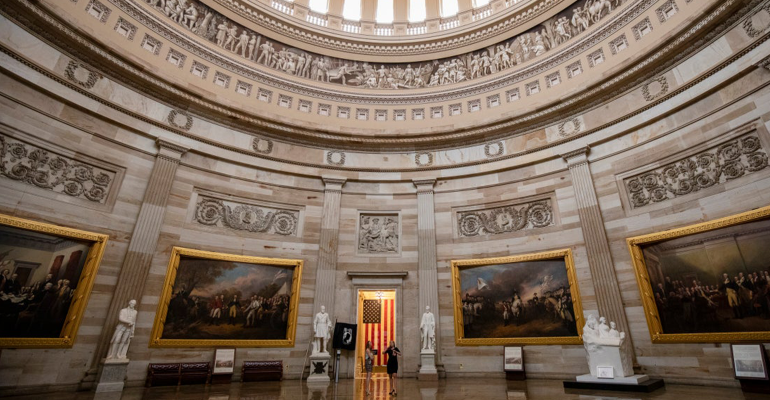 The New Year began with both figurative and literal gridlock in Washington, D.C.

A surprise storm dumped a foot or more of snow on the National Capital Region, shutting down Interstate 95 for 50 miles in Virginia and stranding thousands of motorists in their cars, some for more than 24 hours. Among those stuck was U.S. Sen. Tim Kaine (D-VA) who was on his way back to the Capitol.

Even if Sen. Kaine hadn’t been stuck on I-95, he would have returned to a Congress that is unable to advance President Joe Biden’s signature legislative initiatives. Just before Christmas, Sen. Joe Manchin (D-WV) announced that he would oppose the Build Back Better Act that Democrats have been attempting to pass through the reconciliation process.

Reconciliation enables the majority party to pass certain legislation in the Senate with a simple majority instead of the 60 votes normally required to end debate and proceed to a vote. However, the Senate is evenly split 50-50 with Democrats holding the majority only by virtue of the tie-breaking vote of Vice President Kamala Harris leaving them no margin for error in the face of united Republican opposition.

Compounding matters for Democrats are both redistricting and reapportionment ahead of the 2022 midterm congressional elections. Following each decennial census, states must both rebalance how many of the House’s 435 representatives they are entitled to based upon their populations compared to the national population (reapportionment) as well as adjust the lines of their congressional districts based upon their own populations (redistricting) so each representative has approximately the same number of constituents.

Democrats currently hold a four-seat majority in the House, one of the slimmest in modern history. Political handicappers are already predicting that through reapportionment and redistricting alone Republicans will retake the majority following the 2022 midterms.

Couple this with the historical trend of the president’s party losing seats during midterm elections and President Biden’s approval rating at just 40 percent (with 60 percent disapproving of his handling of the economy and 55 percent disapproving of his handling of the pandemic, according to a new CNBC poll) and you have a recipe for a wave election similar to 2010 and 1994. According to RealClearPolitics, Republicans currently hold an average 1.1 percent edge on the generic congressional ballot, which is an advantage that they did not have in either of those historic election years.

Two dozen Democratic House members, including several senior members and committee chairs, have already announced their retirements. This is typically a clear indicator of the writing on the wall, and they do not wish to be in the minority come a year from now. Even more telling is that 10 of these members are in D+10 or less districts that will be targeted by Republicans.

With many Democrats seemingly resigned to losing their majority in one or both chambers of Congress, their focus will turn to what they still can accomplish before they lose power. This is no time for the business community in general, or the waste and recycling industry in particular, to let their guards down when it comes to advocacy, grassroots and political action committee fundraising.

The next year will present the waste and recycling industry with both threats and opportunities from a majority that feels like it has nothing left to lose. In terms of threats, you can expect a bevy of proposals to hike corporate taxes and impose environmental initiatives that would negatively impact the industry. However, there may be opportunities to work with the majority as well on items such as eliminating the Federal Excise Tax on heavy trucks, an electric vehicle tax credit for heavy trucks and tax credits to improve domestic recycling infrastructure.

If the 2020s have shown us anything so far, it is to be prepared for whatever may come our way and grab on to opportunities before they disappear. It looks like 2022 will live up to that trend.