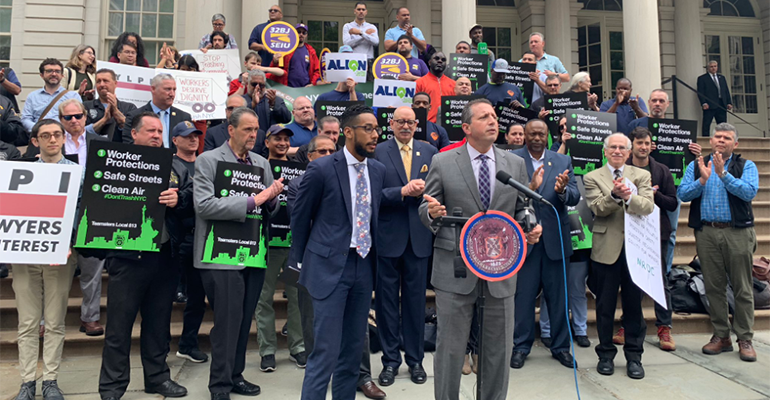 New York City Council Member Antonio Reynoso’s proposed legislation would divide the city into at least 20 commercial waste zones with each zone serviced by one carter.

New York City Council Member Antonio Reynoso introduced his version of a bill to create a citywide commercial waste zoning system on May 29 at City Hall.

The legislation introduced would authorize the city to create a commercial waste zone system that would divide the city into at least 20 zones with each zone serviced by one carter. This is much different than the plan initially unveiled in 2018 by the City of New York Department of Sanitation (DSNY), which stated the city would be divided into 20 zones, each served by three to five carters selected through a competitive process.

The approach has been said to reduce truck traffic associated with commercial waste collection by more than 60 percent, or more than 18 million miles per year, while strengthening service standards and allowing for customer choice. Now, however, it appears the system will be more exclusive.

Under Reynoso’s bill, commercial carting companies would engage in a competitive bidding process, through a request for proposal (RFP) process conducted by DSNY for the right to operate within these zones. The RFP process would require bidding companies to comply with certain baseline standards. According to the measure, a number of other criteria would be weighted competitively, requiring companies to demonstrate how they can best meet the needs of a given zone, while raising environmental, labor and safety standards.

"I am proud to introduce legislation to reign in New York City’s private carting industry once and for all," said Reynoso in a statement. "My bill will authorize the city to enact a commercial waste zone system to comprehensively address the labor, safety and environmental violations that have plagued the private carting industry for years. A zoned system will make routes drastically more efficient—this means a reduction in vehicle miles traveled, meaning less greenhouse gas emissions and improved pedestrian safety. Furthermore, in order to operate in one of these zones, companies must comply with stringent labor, safety and environmental standards. A commercial waste zone system is a catch-all solution that will finally transform this industry for the sake of workers, communities and the environment. I have fought tirelessly alongside my allies in transforming the waste industry, and I urge my colleagues to push for swift passage of this legislation."

Today I intro’d a bill to enact a commercial waste zone system in NYC. It is finally time to transform this industry for the sake of workers, communities, and the environment.

TY to my Council colleagues & the @donttrashnyc coalition for their support. pic.twitter.com/rWjuD41xF4

During the press conference, Reynoso stressed the issue of safety, bringing up Sanitation Salvage's two fatal crashes that resulted in the deaths of Mouctar Diallo and Leon Clarke and the company's shutdown.

“Mouctar Diallo. His name will not be in vain,” @CMReynoso34 says today as he unveils new legislation to rein in deadly private carting industry. pic.twitter.com/zrKZnfy845

During the introduction of his bill, Reynoso was joined by fellow Council members, Teamsters Local 813 and environmental justice, small business and safe streets advocates.

“A commercial waste zone system is a catch-all solution that will finally transform this industry for the sake of workers, communities, and the environment." - @CMReynoso34 #DontTrashNYC https://t.co/ofJsH8dx85 pic.twitter.com/pqmudyFpkX

“The creation of commercial waste zones will result in tremendous benefits for the city. The zones will reduce the number of truck miles traveled each night by private carters by over 50 percent and achieve reductions in greenhouse gas emissions of over 40 percent,” said Council Speaker Corey Johnson in a statement. “It will also require public safety training to workers that will result in safer streets and improve agency oversight over carter operations. I want to thank Council Member Reynoso for his leadership in this issue and hope this will be the beginning of a new and safer era for the industry.”

Waste360 reached out to DSNY for a comment regarding the introduction of Reynoso’s bill and received the following statement:

The city supports a non-exclusive system with up to three to five carters authorized to service each zone. This approach allows each customer to choose a carter that best meets its specific service and pricing needs, while assuring that all carters operate efficiently and are vetted by the city’s rigorous selection process. A non-exclusive system achieves very similar efficiency and emissions improvements compared to an exclusive system, while avoiding the large disruption to the market and customers that would come with having only one carter per zone.

Our plan provides opportunities for a variety of private carters that are able to meet our high contract standards. Plus, it does not leave the city vulnerable to a single large carting company that may fail in meeting its obligations or leave the market. Most importantly, customers overwhelmingly prefer a non-exclusive model, as they want the ability to shop around and fire their carter if their service needs are not met.”

New Yorkers for Responsible Waste Management (NYRWM) also released a statement saying NYRWM “continues to support meaningful reforms to the city’s commercial waste and recycling system that maintain the many benefits of the open market system and the city’s many multigenerational businesses that provide them.”

However, the statement went on to say:

“Proposals to create a zone system—either total monopoly, as proposed by Councilmember Reynoso and the Teamsters, or near-monopoly, as proposed by DSNY—are a solution in search of a problem, misguided as a matter of environmental policy, and extremely risky to both the waste services industry and the more than 100,000 customers it serves.

Either type of zone system would eliminate dozens of locally-owned and operated companies, as well as good-paying jobs while driving up prices to customers and reducing incentives for good service.

With the sole exception of limiting waste collection services to just one city-selected company in each of twenty zones, ALL of the elements of the proposed legislation are worth full consideration and can be effectively addressed in the city’s existing regulatory system.

The hypothetical improvements promised by a zone system in recycling, organics diversion, traffic congestion, air emissions and other good things are not well-supported by sound thinking, industry knowledge or good data. By 2020, the city’s waste services industry will shrink to around 35 companies capable of providing a full range of services with serious attention to safety, labor standards and other best practices—including beginning to test electric collection trucks.

Sooner or later, a zone system could reduce the number of companies to as few as five, with severe consequences for customers, locally-owned companies and potentially harming the city’s capacity to respond to emergencies.

It is unfortunate that Councilmember Reynoso did not directly participate in meetings of DSNY’s advisory board, or otherwise meet with industry and customer stakeholders to learn firsthand the many concerns and risks associated with zone-based systems before partnering with the Teamsters to introduce his Monopoly/Cartel Zone proposal.”