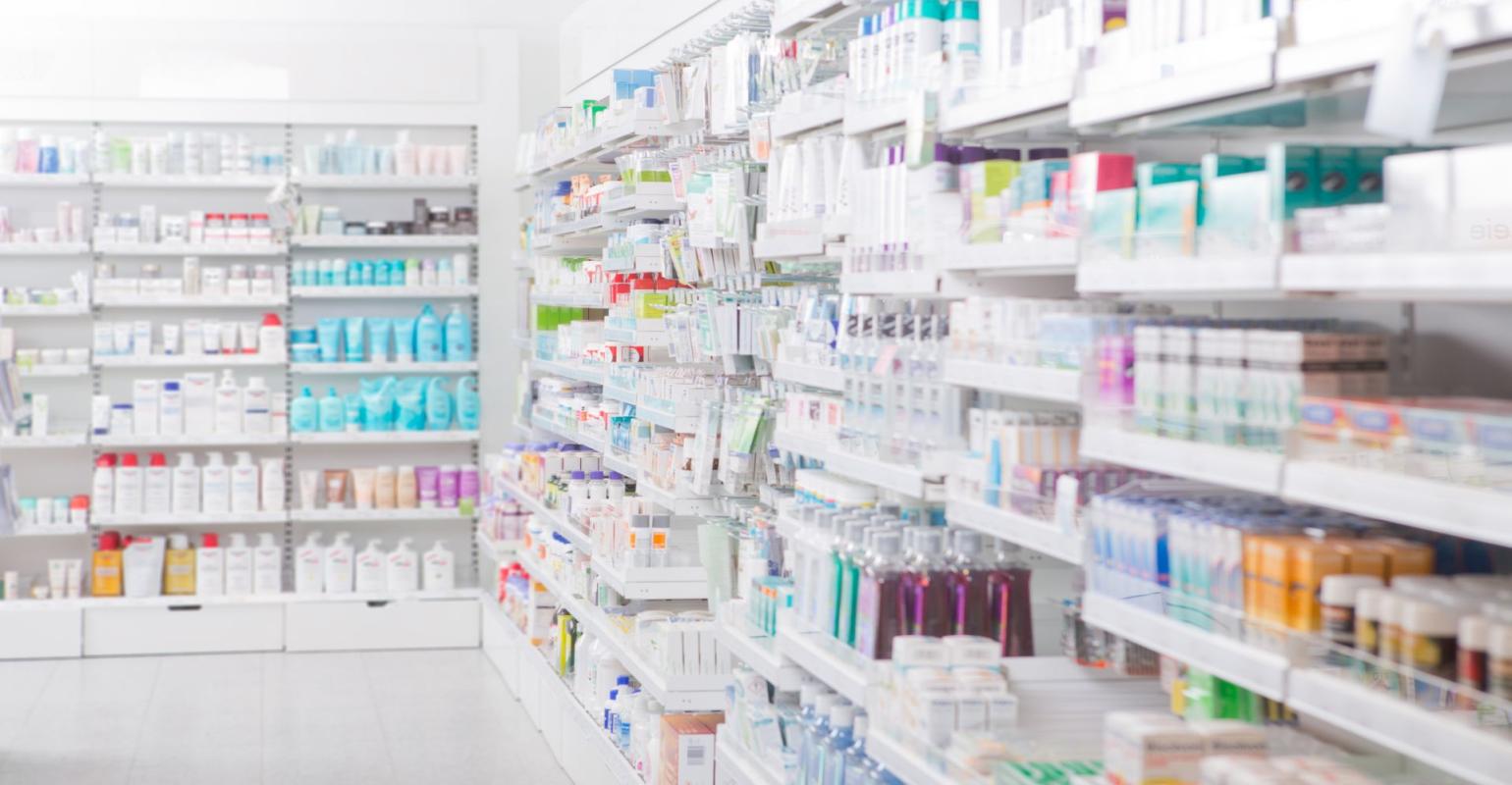 Part one of a two-part series breaks down how EPA’s finalized standards will impact healthcare providers, retailers, pharmacies and reverse distributors.

For healthcare facilities and pharmaceutical reverse distributors that generate and manage hazardous waste pharmaceuticals, the current regulatory and compliance landscape can be not only confusing to follow, but it can end up being a maze of potential complications.

Second, EPA explained that pharmaceuticals entering the environment, via draining, flushing or other means, are having a negative effect on aquatic ecosystems and on fish and animal populations. This has led to the nationwide prohibition of disposing hazardous waste pharmaceuticals down the drain.

The final rule, which was published in the Federal Register on February 22, can be dissected into three major areas—which begin to take effect in nonauthorized states on August 21. The first part of the rule, Subpart P, which is bulk of the rule, creates more flexible regulations for the healthcare sector and smaller quantity generators (SQGs), prohibits sewer disposal of hazardous waste for all states and eliminates some regulations that also fall under the Food and Drug Administration (FDA). The second part of the rule provides regulatory and national consistency on how RCRA applies to reverse distribution and reverse logistics. And the third part of the rule eliminates over-the-counter nicotine replacement therapies as a hazardous waste.

Cara Simaga, director of regulatory affairs at Stericycle, a healthcare waste management company, explains that generators still struggle with what constitutes a hazardous waste and why pharmaceutical waste is considered hazardous waste. She says healthcare facilities and generators can prepare for implementation of the first phase of the final rule in August by following EPA guidance and checking in on EPA’s list of frequently asked questions, which are expected to be updated. She adds that individual states should also get the word out to generators located in their state. 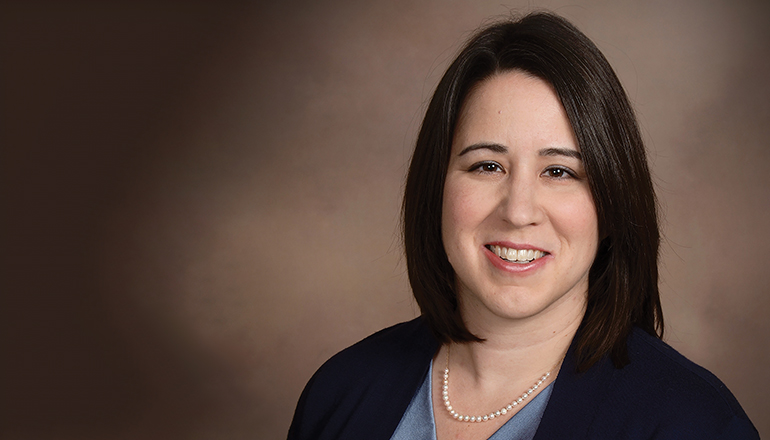 Simaga believes the rule will help reduce the compliance burden for the healthcare sector since, in many cases, the rule will allow a generator to drop to a lower generator status qualification. However, she says, the most problematic part of the rule is P-listed hazardous waste—or waste on EPA’s P list, which is considered acutely toxic. There are roughly 200 chemicals on that list, including Coumadin and nicotine, which are common pharmaceuticals used in healthcare.

“The issue, especially with P-listed waste, is that [those wastes] are considered so toxic that even the empty container needs to be managed and disposed of as a hazardous waste,” explains Simaga. “That is something that for years a lot of hospitals have struggled with. Then, the other issue is that you can only generate up to 2.2 pounds, or 1 kilogram, per month of this waste. If you go over that, you are now considered a large quantity generator (LQG), and that is the highest category and most regulated level of generator.”

Simaga has worked with behavioral health facilities that have been considered LQGs solely because of the amount of nicotine waste they have. But to her, that has never made sense.

“It wasn’t EPA’s intent to regulate these types of facilities that much,” she explains. “But it’s just how things have worked out because the law says it is a P-listed waste, meaning the empty container needs to be collected and managed. And that has caused a lot of headaches over the years. This [finalized] rule will really help make management of that waste easier.”

Elise Paeffgen, a Washington, D.C.-based attorney for Alston & Bird's Environment, Land Use & Natural Resources Group, counsels clients in the pharmaceutical, medical device, healthcare and logistics industries on hazardous, controlled substance and medical waste compliance and enforcement matters. She points out that several changes will come down the pike for reverse distributors. 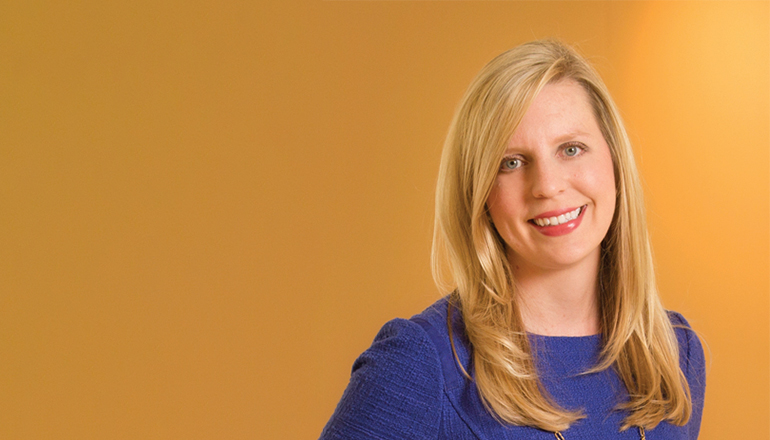 Another big change regarding expired products focuses on what pharmaceuticals reverse distributors can and cannot accept, as well as what states will adopt in terms of the rule. States could end up adopting less stringent requirements, which they have the option of doing, or adding on broader or more stringent regulations.

“On the reverse distributor side, there will be a lot of changes out of the gate,” explains Paeffgen. Reverse distributors are going to have to closely monitor the states so that when things are changing, their acceptance policies and their contracts will keep up with all the state changes. A lot of the changes will not be very significant to reverse distributors that are already large quantity generators.”

Here is a more in-depth look at how the finalized standards and changes to Subpart P and the sewer ban will impact healthcare providers, retailers, pharmacies and reverse distributors.

“There has been a ton of enforcement action in the last 10 years, and I think that will continue to increase with a lot of the focus of enforcement on waste characterizations on health systems, hospitals and doctors’ offices,” says Paeffgen. “Are they understanding that they are generating hazardous waste? And are they managing that waste appropriately—both onsite and at disposal? If it’s something that has credit potential, they can send it to a reverse distributor.”

The benefit for healthcare facilities is that under the finalized rule, they no longer need to triple rinse containers, which has been a challenge under current EPA regs and guidance. Now, under the new rule, there are standards for different types of containers.

The sewer ban will take effect this August at every state and at every healthcare facility, even if they only generate very small quantities of hazardous waste. This must be implemented across the board, and facilities will have to ramp up their training and communications with healthcare staff.

“A lot of it was driven by environmental concerns with the growing quantities of pharmaceuticals in drinking water and how our water sources impact fish and wildlife,” says Paeffgen. “It’s part of RCRA, so it takes effect as soon as the new regulations take effect in August. I understand that a lot of facilities are still flushing drugs—including some controlled substances that are hazardous waste—so this will be a change for a lot of facilities.”

Simaga stresses the importance of generators and facilities thoroughly examining what they tell their staff can and cannot go down the drain. She also says it’s important for states to get the word out to their generators.

“Even though companies like us have been trying to shout this from the rooftop that this is coming, there are still folks out there who may not have gotten that message,” she explains. “You need to take a hard look at what you told your staff can go down the drain. If you have a policy that all of your controlled substances go down the drain, you have to analyze which ones are a hazardous waste. Have you ever evaluated that? If any pharmaceutical is going down the drain and if you haven’t done that evaluation to determine which ones are hazardous and which are not, how do you know if you are putting the right or wrong stuff down the drain?” 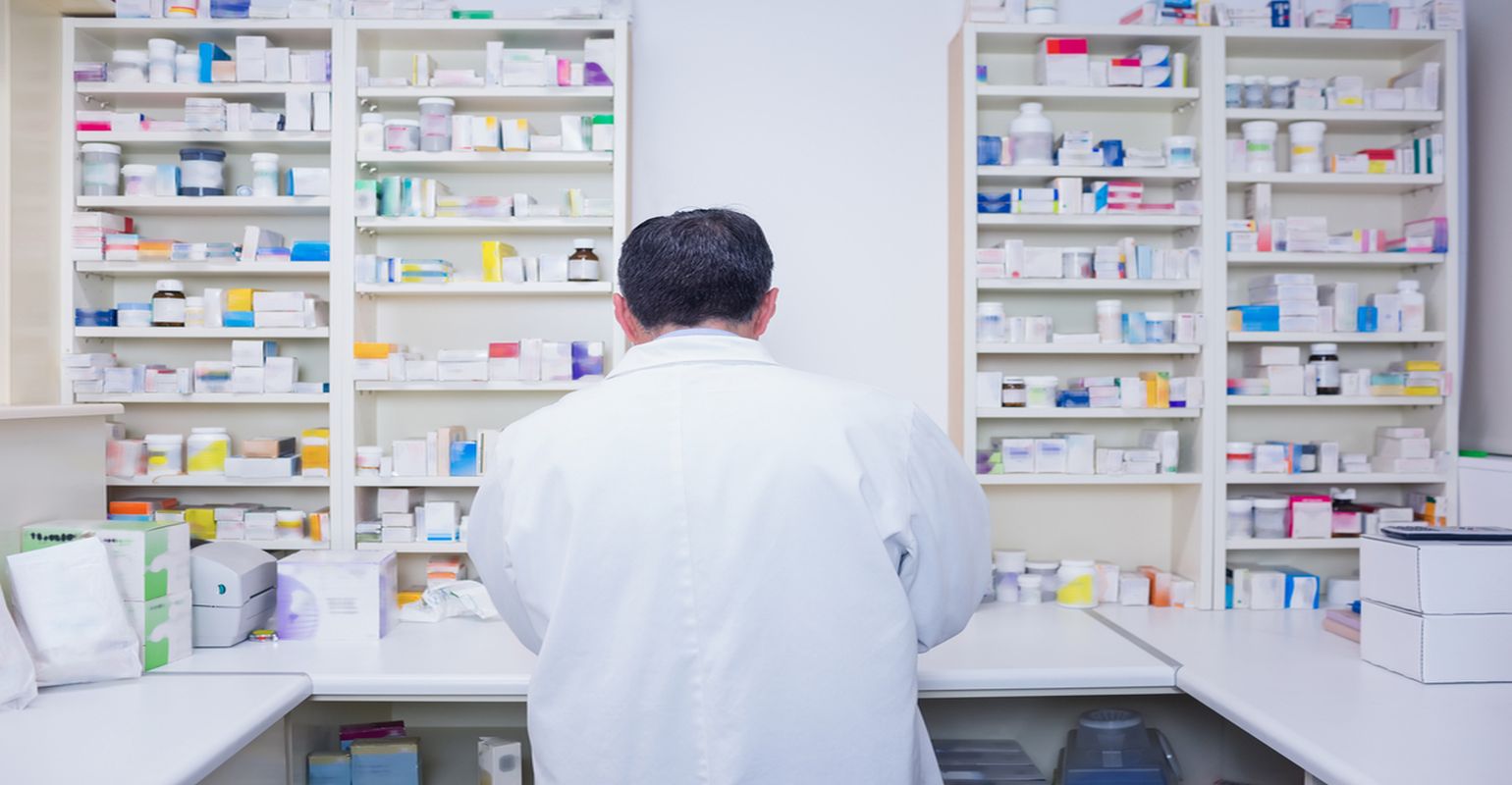 EPA is in the process of developing FAQs to address that distinction and whether there can be some dual management between those OTCs and prescription pharmaceuticals.

“Like healthcare facilities, the landscape is changing in terms of what can and cannot be sent to reverse distributors,” explains Paeffgen. “That landscape remains the same whether coming from a retailer or pharmacy; they all fall under the umbrella of healthcare facilities under the rule. If a consumer is returning their prescription to the pharmacy and the pharmacy has already gotten reimbursed from an insurance company, it would be something the pharmacy could not send to a reverse distributor—that is one change that pharmacies in particular will have to be mindful of.”

Subpart P and the Nicotine Exemption

Another significant change for retailers is the amendment to the P listing for nicotine products. FDA-approved OTC nicotine replacement therapy products—think gums, lozenges, patches or items that can be bought at retail stores—are now excluded from the acute hazardous waste listing. However, prescribed inhalers and e-cigarettes or e-juices will still be regulated as P-listed hazardous waste. 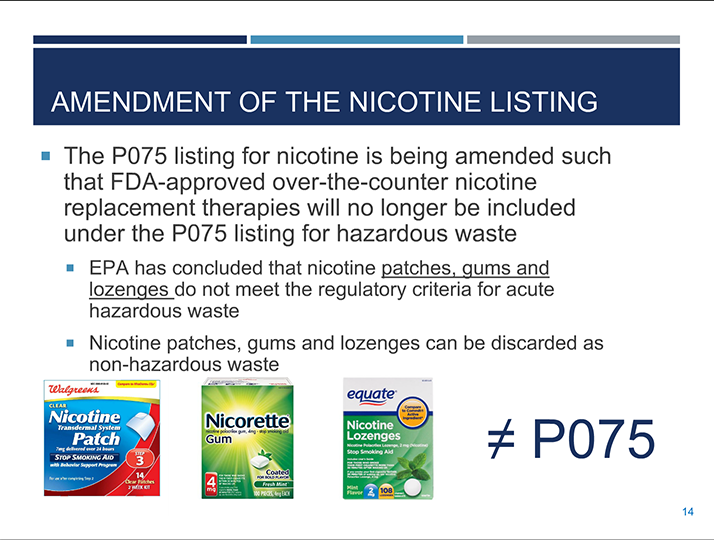 Because the nicotine exemption is a much less stringent regulation, states will have the option of whether to include it in their rulemaking.

“For healthcare facilities, this would mean that if they drop that nicotine gum on the ground, when they go to dispose of it, that is no longer P-listed waste,” explains Simaga. “It could go into the trash, so could the empty wrapper and the blister packs from it … This will help those behavioral facilities drop to lower generator status levels. If it’s a prescription nicotine product, it is still a P-listed waste.”