Do We Need Legislated Policies on Electronics to Develop a Circular Economy? 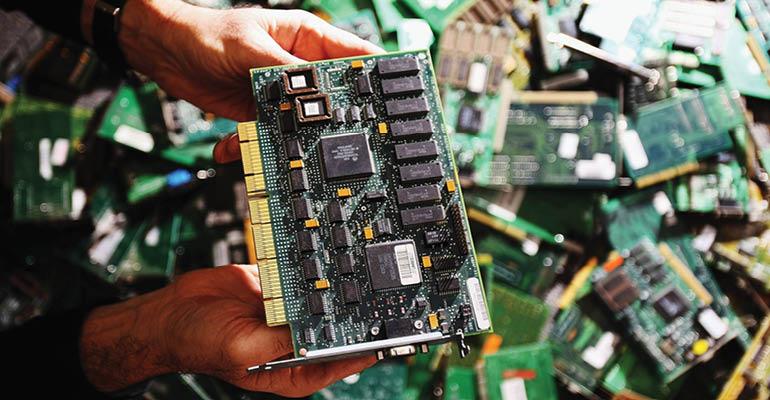 Twenty-five states and the District of Columbia already have electronics recycling laws in place.

Depending on who is telling the story, different sets of data have been used to illustrate the magnitude of consumer electronics in our daily lives. From a waste perspective, the U.S. Environmental Protection Agency (EPA) tracks only select products (computers, phones, TVs, printers, etc.), and the European Union (EU) sees things on a broader perspective. Since small and large appliances are now reliant on digital controls, they believe anything with a plug qualifies. There are some signs our thinking may be changing.

Industry representatives ask us to believe that electronic discards are one of the fastest shrinking components in the municipal solid waste generated in the U.S. Using weight as a measurement, one might be able to say that with a straight face. It is no secret that smaller, lighter devices have replaced their heftier predecessors. Ask any state with weight-based recycling goals about the unfortunate consequences of building their programs on that criteria. By considering current sales data, we should be able to identify trends to do a better job of planning for future needs.

Every year, the Consumer Technology Association (CTA) releases a report projecting sales for the year. Historically, this trade group tracks more than 100 categories of consumer electronics. This year’s report projects U.S. factory sales-to-dealers for more than 300 consumer tech products. Approximately 715 million units representing various types of emerging technology are projected to be sold this year. (Think Alexa, drones, wearable monitors and smart home controls) In addition, among other items, CTA estimates 44 million TVs, 50 million laptops and 189 million smartphones will also be sold. Some of these categories represent more than a 40 percent increase over 2017. All told, the resulting 2018 sales revenue is expected to surpass $350 billion.

Within 18 months to three years, most of these purchases will lose their appeal or functionality and be discarded. They may become incompatible with software enhancements, be irreparably damaged or simply appear out of vogue. For those needing minor repairs, the fix, currently available only from select original equipment manufacturer (OEM) vendors, will typically be costly enough to justify a replacement purchase. So, it’s safe to assume that, in the near future, most of our purchases will end up in waste disposal facilities.

Some manufacturers offer voluntary recovery programs. Twenty-five states and the District of Columbia have electronics recycling laws. Each differs in effectiveness and degree of producer responsibility. All have limitations. In the remaining states, recovery is often dependent on the availability of local scrap processors. Under these combined circumstances, we recover only 20 percent of the e-scrap. The quest for a federal law fizzled early in the game. Self-interests, inability to relinquish existing programs and disputes over cost-sharing platforms have always hampered these efforts.

Moving forward, we need to reevaluate our tendency to view recycling as the sole means to manage our rapid turnover and increasing volume of discarded consumer electronics. It’s easy to see how the volume of units is now the bigger concern than how much each unit weighs. Size reduction, on the other hand, along with the material content of consumer electronics factors into the recycling commodity value proposition. Recycling may be unrealistic for certain items or components of items when lifecycle thinking is considered.

Despite the costs and challenges of complying with the current array of regulatory mandates and self-imposed programs, OEMs collectively have been unable to produce a universal answer to minimize the volume of waste generated or introduce alternative methods of recovery.

Legislative initiatives across numerous states are now pursuing issues from a different perspective of consumer electronics that directly contribute to premature disposal. As of April 2018, 18 states had introduced Right to Repair bills that would require OEMs to make repair manuals and parts available to consumers and independent repair shops. Access to these tools is currently restricted to OEM authorized technicians, skewing the supply/demand and thus the going rate for service in their favor. Aside from generating revenue, there are allegations that costly repairs are a purposeful tactic designed to drive new sales and accelerate discards.

Specifically targeted at devices with digital controls, Right to Repair bills address products that cross over into the broader definition of consumer electronics mentioned earlier. In America’s breadbasket, legislation was prompted by farmers fighting for their rights to repair their John Deere tractors, which are now reliant on computer technology.

The original Massachusetts legislation, which forms the precedent for these new initiatives, passed as a binding referendum with 86 percent voter support. Known as the Motor Vehicle Owners' Right to Repair Act, it prompted automobile manufacturers to voluntarily comply in all 50 states rather than face more state or federal legislation. Proponents anticipate that if one of the current state digital repair bills passes, a similar agreement will result from manufacturers.

The state that could be the disrupter is Washington, where proposed legislation would halt sales of devices designed to thwart repair. Designing for repairability is one of the core elements of a circular economy. The law would apply to those devices with batteries glued to the body. For the most part, once adhered to the device, removing the batteries will almost certainly cause fatal damage, making the initial attempt at repair futile. Flammability gravely concerns recyclers who handle these items because of the known potential for lithium ion batteries to ignite when shredded.

To be fair, OEMs have introduced approaches indicative of circularity. Notable in CTA’s sales forecasting are the newly included subscription services. Currently, the subscriptions being monitored are primarily entertainment oriented. (Netflix, Hulu, Spotify, etc.) However, the practice of signing on to gain access to products, which we previously would have purchased, is an important and growing practice.

We were eased into acceptance with software subscriptions. Think about how many of those cyclical payments are now on your credit card. In exchange, we gained the convenience of having software that is always up to date. The same concept applies to automated ordering of printer cartridges and to hardware for some devices.

If you are comfortable with a brand, you can sign on directly to programs like iPhone or Galaxy Forever regardless of your carrier. As the latest models become available, you simply exchange your phone because you don’t actually own it. The product is viewed simply as a means of delivering other services. This makes ownership less important and the capacity to keep up with new service offerings paramount. For consumers like me, who seek out new technology on a regular basis, these programs have distinct advantages. As a bonus, the program is complete with an automatic recovery system.

The hitch is, for these conveniences, you pay eternally for the privilege to operate. Previously, if your finances didn’t warrant a new purchase, you could limp along with an older software version or a device minus the latest bells and whistles.

Whatever you want to call it, leasing, licensing or subscription, this could signal a shift in how OEMs, at least in some segments of the industry, intend to operate. It maintains control of their liabilities, their products and reduces their environmental impact. It certainly is a push back to Fair Repair.

Design for leasing is clearly inherent in the principles of a circular economy. That is if the act of taking back the device is not simply to redirect it to incineration or disposal. Done right, there are profits to be made in the process. It gives manufacturers an incentive to prolong the life of the product because, generally speaking, the resale value of devices is considerably higher than the material value alone. It sets the stage for repair and refurbishment and increases job opportunities, at least internally.

Customers who prefer to own or can’t afford the luxury of the leasing program can purchase slightly newer models with value added features incorporated during the refurbishment process. Of course, the purchase should guarantee recovery at the end of the device’s useful life.

Whether by manufacturer design or user complicit through outdated consumptive practices, planned obsolescence is not acceptable. We’re spinning our wheels fighting over band-aid solutions. The resulting waste is not being curtailed through recycling. We need to incentivize manufacturers to maximize the resources used in their products by extending the life of the physical hardware. If we’re fortunate, one state will prevail and deliver the message that business as usual isn’t good enough.