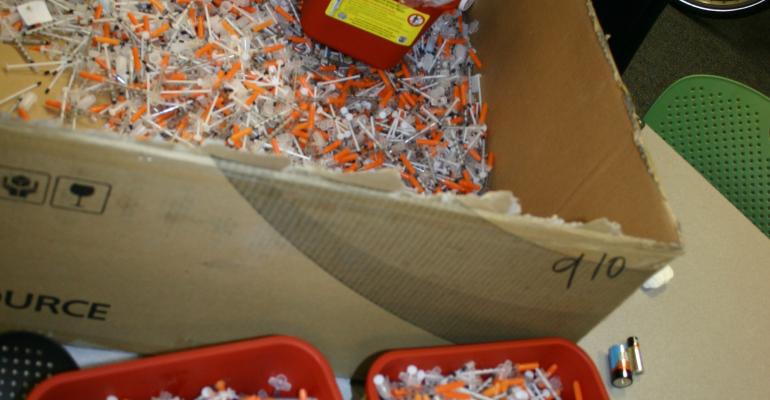 Program will develop a statewide take-back system for sharps and medications.

The California State Senate unanimously, on a vote of 39-0, passed SB 212, which will establish a statewide take-back system for sharps and medications. If signed into law by Gov. Jerry Brown, SB 212 will be the first in the nation to establish a comprehensive, producer-funded take-back program to provide safe and convenient disposal options for home-generated pharmaceutical drugs and sharps waste.

“The California Product Stewardship Council has worked tirelessly for the last eight years to get the pharmaceutical industry to work with us to put in place a statewide take-back program,” said Heidi Sanborn, senior advisor and former executive director of the California Product Stewardship Council (CPSC), in a statement. “It took passing nine county ordinances and the hard work of Senator Jackson and Assembly member’s Ting and Gray as well as many others to successfully negotiate a compromise with the pharmaceutical industry to make this happen. This is a public health and safety bill whose time has come, and we sincerely hope that Governor Brown will sign this into law.”

SB 212 addresses the problems that exist due to the lack of a statewide system to manage these products at the end of their useful life. By requiring manufacturers of sharps and pharmaceutical drugs to create, fund and participate in a statewide take-back system, this bill will take a step to ensure that California residents throughout the state have access to safe, convenient disposal methods of sharps and drugs to address public health concerns.

CalRecycle estimates 936 million sharps used by consumers in California each year, approximately 31 percent of those are thrown in the trash. Another study by University Mass Lowell in 2015 estimated 7 percent of needles are flushed, and needle stick injuries occur with unacceptable frequency.

Similarly, prescription and over the counter medications present significant problems when leftover if not properly secured and disposed of. There is no question that consumers have leftover drugs in their homes, which tend to be stockpiled, flushed or thrown in the garbage. Leftover drugs and a lack of safe and convenient disposal options are fuel to the opioid epidemic and increase instances of accidental poisonings and can cause environmental harm.