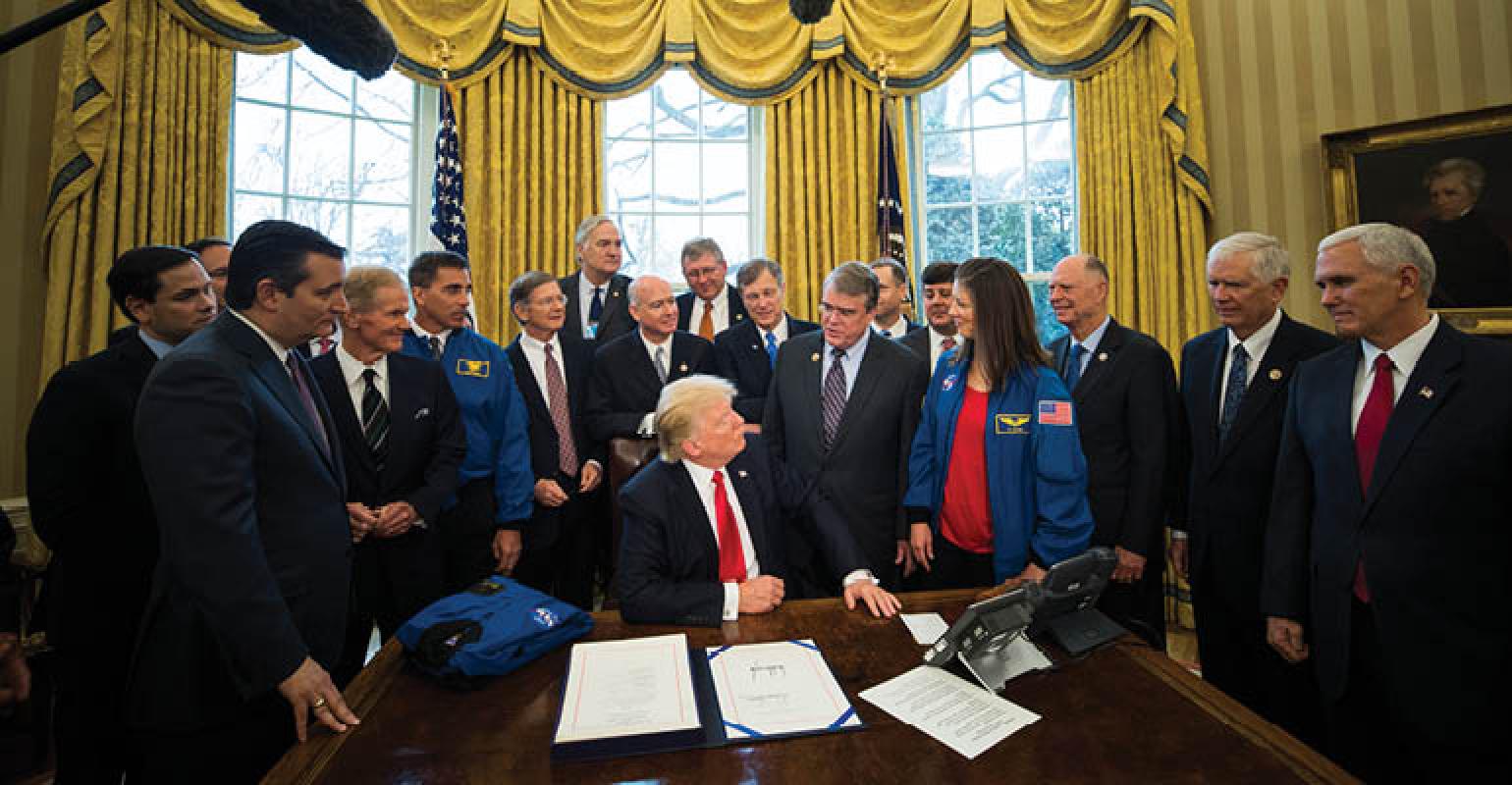 Photo by Jim Lo Scalzo-Pool/Getty Images
In this edition of Business Insights, we review the budget blueprint and identify potential impacts on the industry.

In mid-March, the Trump administration released its preliminary budget—“America First—A Budget Blueprint to Make America Great Again.”  Although the proposed budget for the Environmental Protection Agency (EPA) has garnered the most attention given the size of its proposed cut, a number of other changes within various departmental budgets have implications for the environmental industry as well.

Overarching Drivers of the Budget

The stated, overarching purpose of the budget is to increase American defense and public safety, while not adding to the deficit. This in turn drives cuts in almost all the government agencies in order to fund a 10 percent, or $54 billion increase in defense and public safety spending. However, within the other domestic agency budgets a top priority remains the modernization of outdated infrastructure, to be paid for or supported by the reduction or elimination of programs that are considered redundant, inefficient or do not produce the desired results.

The key focus is on regulation—and to that end, the budget preface highlighted two executive orders from late January setting out a regulatory freeze (including not just new but pending regulations) as well as a mandate that for every new regulation, two existing regulations must be eliminated. New regulations must generate no new net incremental costs, and agencies will eventually be subject to cost caps.

Regulations must be considered from a pro-growth perspective, with oversight and accountability. All in, to these ends, another January executive order instituted a government hiring freeze, with emphasis on reducing compliance activities and requirements.

Although the DOE budget overall would be down 5.6 percent, the blueprint notes that the department would remain committed to cleaning up nuclear sites, and the Environmental Management program is funded at $6.5 billion. On the other hand, the innovative technology programs (read cleantech or green energy) will be eliminated as “financing disruptive energy research and development (R&D) and commercialization” is better left to the private sector.

Additionally, the Office of Energy Efficiency and Renewable Energy is one of six offices targeted for a $2 billion reduction in total. Many solid waste industry participants will be negatively impacted by the loss of the compressed natural gas (CNG) tax credit, which expired at the end of 2016 and is unlikely to be renewed. Although the DOI overall is slated for a 12 percent decrease, the blueprint does call for increased funding for programs that support development of energy on public lands and offshore waters, and it specifically calls for streamlining the permitting process and providing access, potentially benefitting the energy waste business.

A handful of other departments have proposed budget changes that tangentially affect the industry as well. Within the State Department, any programs or payments related to the Global Climate Change Initiative are eliminated. Within the proposed Department of Agriculture budget, water and wastewater treatment grants and loans are eliminated (saving $498 million) as they are considered redundant with programs in other agencies, notably the EPA.

The Department of Homeland Security received an overall funding increase, though it appears that the Federal Emergency Management Agency (FEMA) funding may be reduced and have some additional matching grant constraints, which could impact environmental industry companies on the margin when providing disaster relief waste services.

Lastly, although the Department of Transportation’s proposed budget is cut 13 percent, the blueprint does note a focus on investing in nationally and regionally significant transportation infrastructure projects, and while there is little detail, it would seem to support larger highway and multimodal freight projects.

The EPA to Take the Biggest Hit

As has been widely reported, the EPA is slated to take the biggest hit, with its proposed budget slashed 31 percent and 3,200 positions, or 20 percent of its staff, to be eliminated. The overall emphasis appears to be on meeting current legal requirements, with a focus on air and water, and devolving a lot of activities (enforcement and otherwise) to state and local authorities.

The EPA is envisioned as probably the key area of regulatory relief. In line with the overarching goal of infrastructure modernization, the only part of the proposed EPA budget to receive a slight increase are the State Revolving Funds, which support water and wastewater treatment plants. Cuts abound everywhere else in the agency.

The Superfund program is slated to be cut 30 percent to $762 million, which would negatively impact the special waste business. The enforcement budget is down 24 percent to $419 million, with more enforcement delegated to states. For the solid waste industry this probably implies little change, given the longstanding state rules which primarily govern the industry.

The Office of Research and Development is cut by nearly half to $250 million, which may impact some recycling studies. Categorical Grants are reduced to $597 million, down $482 million, which could also impact state and local recycling programs, as well as brownfield redevelopment. Finally, the blueprint eliminates more than 50 EPA programs, saving $347 million, with some likely ancillary impact on recycling and solid waste, though there is little detail on these as yet.

Also as widely reported, the blueprint reorients the EPA’s air program away from climate change. This likely has pluses and minuses for the overall solid waste industry.

Very broadly speaking, recycling in general tends to benefit from a greenhouse gas emission focus, which may well now be de-emphasized (at a minimum), along with EPA tenets and programs that sprang from a climate change perspective, such as sustainable materials management (SMM), Energy Star, the Landfill Methane Outreach Program (LMOP), and the Waste Reduction Model (WARM).

Also in question would be the recent activities and goals connected to food waste diversion that the EPA was working on in concert with the Department of Agriculture. On the other hand, and again very broad brush, the EPA’s new direction (as proposed) could benefit the landfill side of the industry. As landfills are one of the larger single sources of methane (a greenhouse gas) a de-emphasis on greenhouse gas reduction could take the onus off landfills. In particular, an easing or delay of the New Source Performance Standards (NSPS) would likely benefit the landfill side of the business from a compliance cost perspective.

Time Will Tell What Actually Transpires

Of course, the budget is preliminary, and from the Trump perspective is probably viewed as a starting point for debate. Even EPA chief, Scott Pruitt, brought in as a staunch opponent of perceived regulatory overreach at the agency, has expressed some concern at the size of the cuts, particularly to the state grants.

That said, even if some of the more drastic reductions are rolled back, the new dynamic and direction of the agency appears to have been set.