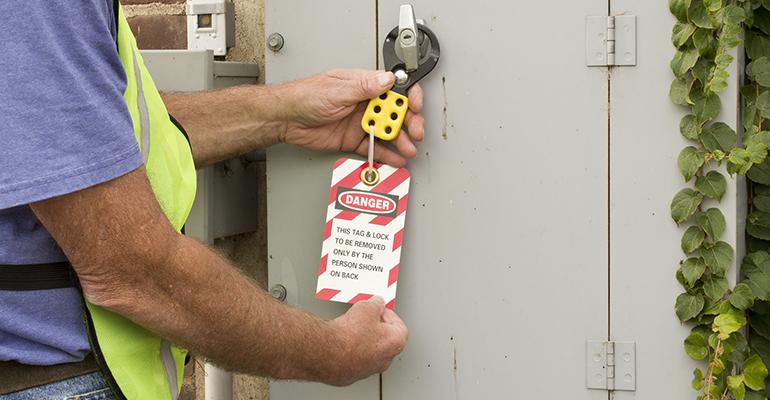 Start Slideshow ›
We’ve compiled tips from NWRA and OSHA on how waste and recycling companies can remain compliant with OSHA’s current LOTO standard.

Workers maintaining or servicing machines and equipment could be seriously injured or killed if hazardous energy is not properly controlled. Hazardous energy sources include electrical, mechanical, hydraulic, pneumatic, chemical, thermal or other sources in machines and equipment. And the unexpected startup or release of stored energy could cause serious injury—electrocution, burns, crushing, cutting, lacerating, amputating or fracturing body parts—or death to workers.

According to the U.S. Department of Labor’s Occupational Safety and Health Administration (OSHA), craft workers, electricians, machine operators and laborers are among the millions of workers who service equipment routinely and face the greatest risk of injury. OSHA also makes it clear that the onus is on employers to thoroughly train and protect their workers from hazardous energy.

Moving forward, OSHA is potentially looking to update its current LOTO standard, which was published in 1989. In May, OSHA sent out a request for information (RFI) on a possible update to the standard seeking comments on the use of control circuit-type devices to isolate energy, as well as the evolving technology for robotics.

Through its RFI, OSHA also wanted to know how employers have been using control circuit devices, including information about the types of circuitry and safety procedures being used; limitations of their use to determine under what other conditions control circuit-type devices could be used safely; new risks of worker exposure to hazardous energy as a result of increased interaction with robots; and whether the agency should consider changes to the LOTO standard that would address these new risks.

As the agency considers updating its LOTO standard, we’ve compiled some tips from NWRA and OSHA on how waste and recycling companies can remain compliant with the current standard.