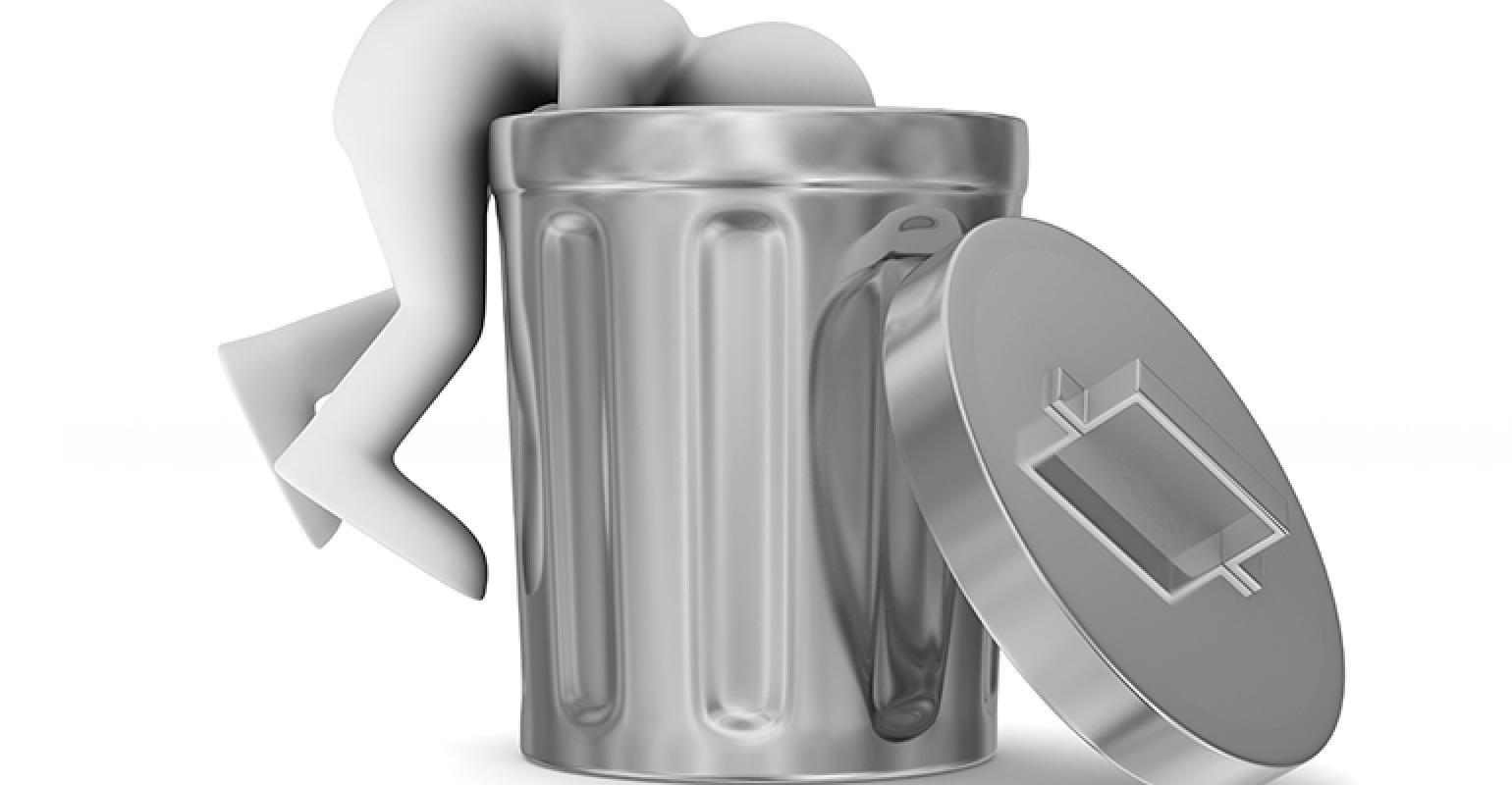 Trash Bin Search Rulings Could Depend on How the Wind Blows

Most state courts have ruled that warrantless garbage searches are acceptable under a certain standard. So, it’s newsworthy when a state favors individual rights.

Have you ever used your index finger as a weathervane? Licking your finger and sticking it into the air? It’s a rough but legitimate way to estimate wind direction. Whichever side of your finger (facing north, south, east, west) feels the coolest, that’s where the wind is coming from. Keep this in mind for what turns up later in this column.

Courts throughout the country often hear cases where police officers find incriminating drug-related items in a homeowner's garbage can. Based on that evidence, the officers obtain a warrant to search the home where, sure enough, they find unlawful narcotics. Suspects are arrested—often then and there—and criminally charged.

Decades ago, the U.S. Supreme Court ruled that the Fourth Amendment of the U.S. Constitution, which prohibits unreasonable searches and seizures, does not require that police obtain a warrant before searching trash containers placed in a public area (California v. Greenwood, 486 U.S. 35 (1988)). As a matter of federal constitutional law, no person has a reasonable expectation of privacy in items left at curbside. “What a person knowingly exposes to the public, even in his own home or office, is not a subject of Fourth Amendment protection,” said the justices.

However, the constitutions of virtually all states provide language comparable to the Fourth Amendment, and a state court interpreting the search-and-seizure provisions of its own state constitution may provide more protection than what the federal constitution affords. The vast majority of state courts have ruled that warrantless garbage searches are acceptable if they meet the Greenwood standard. That’s why it’s newsworthy when a state in the mainstream suddenly upends exiting law in favor of individual rights.

Stare decisis is a legal doctrine whereby courts respectfully honor previously decided cases when making a ruling in a later case with comparable circumstances. It’s a Latin term meaning "to stand by that which is decided." Settled law provides notice and fair warning of what behavior or action is necessary or forbidden. Nonetheless, the highest court of a state and the U.S. Supreme Court can and do overturn precedent when at least a majority of the court’s members believe that dutiful adherence to a prior ruling offends their sense of justice, particularly when constitutional rights are at stake.

Tracy Lien and Travis Wilverding lived together in Lebanon, Ore. After local police received information about possible drug activity at their house, Lebanon Police Department Detective McCubbins contacted Republic Services, which, under a franchise agreement with the city, collects garbage from private residences.

McCubbins asked Republic to collect the contents of the couple’s garbage bin separately from the other residences that Republic served so that the garbage could be searched by police officers. A manager for Republic agreed to cooperate by obtaining the garbage ahead of the regular truck serving the neighborhood.

On the regular collection day, police arrived at 7 a.m. PT and parked down the street to observe Republic's collection of trash. The suspects had already placed the cart by the sidewalk. About an hour later, the Republic manager arrived at the suspects’ house in a pickup truck, grabbed the cart and placed it in his truck. He then removed a similar but empty cart from his truck and put it where the other one had been. The manager then transported the suspects’ cart and its contents to a Republic lot. There, he handed it over to the police who searched it and found, among other things, evidence of illegal drugs. Using that evidence, the police sought and obtained a warrant to search the home.

Lien and Wilverding were both subsequently charged with a variety of drug-related offenses. Before trial, both moved to suppress the evidence discovered in their garbage bin, arguing that the warrantless search had violated their rights under Article I, Section 9 of the Oregon Constitution, which provides, in part, that "no law shall violate the right of the people to be secure in their persons, houses, papers, and effects, against unreasonable search, or seizure."

At the hearing on the motions to suppress, McCubbins testified for the prosecution and described how the police had obtained the garbage bin and what the department subsequently did with the bin and its contents. He acknowledged that the bin was handled "not in the normal manner" but, rather, "in a special manner" at his request.

Lien testified that she had lived at her residence for approximately five years and that Republic was the company that picked up her household garbage. She stated that some of the garbage was private in nature and that she had expected the garbage in the bin "to be mixed with other people's garbage and go out to the landfill." She further testified that she expected that the company would handle her garbage in the same way that it processed everyone else's garbage, that is, without anyone going through it before it was commingled and landfilled.

Republic's manager described the usual process of residential garbage collection and disposal. The garbage bins have lids, and customers must place their bins near the street within reach of a mechanical arm on the side-load truck that grabs the bins and dumps their contents into an opening at the top of the truck. The driver typically does not have to get out of the truck and does not see the contents of the individual garbage bins. Once the truck is full—it can hold the garbage of 350 to 400 households—the driver takes it directly to the landfill and dumps the contents at the tipping pad.

He further testified that Republic has an exclusive franchise agreement with the city to provide garbage service for city residents. The agreement did not expressly state that the company could hand over a resident's garbage to law enforcement. He agreed that it was reasonable for Republic's customers to expect that their garbage would be picked up in the ordinary manner, that is, that the lid on the garbage bin would be closed and the bin then emptied into the mechanized garbage truck without the driver getting out and looking into the bin. Notably, he also testified that he handled the couple’s garbage bin as he did because the police asked him to do so, but he would not collect garbage from a customer for a private citizen because that would "violate the customer's privacy."

The trial court refused to suppress the evidence taken from the garbage. The judge concluded that Republic's manager, who had picked up and delivered defendant's garbage to the police, had "acted exclusively at the request and direction of the police." He further concluded that defendants already had abandoned their garbage, along with any "reasonable expectation they would ever see their garbage again or have access to it," before the garbage had been picked up, and they retained no privacy interest in abandoned property.

Lien and Wilverding then entered conditional guilty or no-contest pleas, and they were convicted. (A conditional plea allows a defendant to plead guilty or no contest while reserving the right to have an appeals court decide if the trial judge ruled incorrectly on a critical issue in the case. If the higher court determines that the judge was wrong, the defendant can withdraw the plea and the conviction could be set aside.)

On appeal, the defendants argued that the trial court was wrong in denying their motions to suppress evidence derived from the warrantless seizure and search of their garbage bin. The intermediate appeals court, however, concluded that, under established legal precedent, defendants lost their privacy rights in their garbage once the garbage was retrieved by Republic on its regularly scheduled pickup day. It ruled that the trial court had properly denied defendants' motions to suppress and affirmed the convictions. The Oregon Supreme Court subsequently allowed defendants' requests for review. After considering the arguments made by the parties, the justices, by a 6-1 margin, reversed the appeals court and trial court decisions.

The pivot point before the state high court was whether the defendants retained their privacy interests after the Republic manager—acting at the behest of, and as an agent for, the police—specially picked up the bin and transferred it to the waiting police officers for their inspection. On that issue, the parties respectively took "all or nothing" positions. Defendants argued that the police controlled the taking, delivery and search of their garbage bin without a warrant and in violation of their constitutional rights. The Republic manager willingly acted at the direction of the police, picking up their garbage bin and delivering it to the officers.

In contrast, the state contended that, although Republic's manager was in fact an agent of the police, previous Oregon Supreme Court decisions held that individuals effectively abandon possessory and privacy interests in their curbside garbage once a hauler takes possession of it. Accordingly, in the state's view, when Republic's manager handed over the defendants' garbage bin to the police, defendants had no constitutionally protected interests in their garbage.

With little, if any, support in the trial court record and seemingly using their combined index fingers as “social norms” weathervanes, the high court majority agreed with defendants' contention that they had privacy interests in their closed opaque container placed curbside for collection before the company’s manager arrived.

“In our view, under those circumstances, most Oregonians would consider their garbage to be private and deem it highly improper for others—curious neighbors, ex-spouses, employers, opponents in a lawsuit, journalists, and government officials, to name a few—to take away their garbage bin and scrutinize its contents,” stated the opinion. “In this case, the sanitation company's manager acknowledged that norm: He would not collect garbage from a customer at the request of a private citizen because that would violate the customer's privacy.” The justices effectively treated the manager’s testimony as if represented a valid statewide survey of public opinion.

“It is not hard to understand why people would want to keep their garbage private and would respond with outrage to such an invasion,” the court continued. “We recognize, given the realities of living in modern society, which is experiencing its own significant social and technological changes, that privacy norms exist notwithstanding some limited public exposure of information, in this case, putting out garbage in a closed bin for pickup by the sanitation company at curbside, an area accessible to members of the public other than the sanitation company.”

Different result? That might depend on how and where the wind blows.