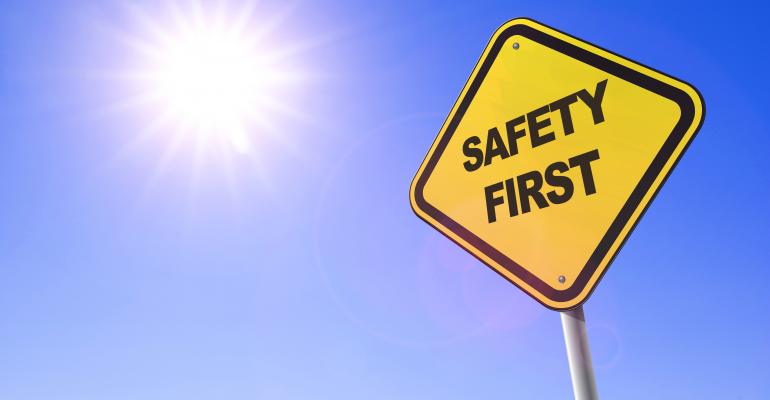 A circuit judge ruled that the design and placement of the dumpster rendered it inherently dangerous. The state court of appeals upheld the decision.

Only 8 years old and yet trying to impress a girl. Shawn Eichler managed to pull a dumpster down on himself while doing his best to perform a pull-up on a bar attached to the front of the bin. His grandmother, Brenda Baker, had rented the dumpster from Modern Waste Systems, Inc. (MWS). Shawn and his mother, Mindy Baker, lived next door to Brenda, and Shawn spent a lot of his time at her house.

Being a minor, Shawn could not take any formal action on his own. Mindy, as his legal representative, filed suit against MWS in the Circuit Court for Lenawee County, Mich., to recover for his injuries. Their claim was based on the contention that the dumpster, which was a "slant-type" with a long overhang, was inherently dangerous if an 80-pound boy could pull it over so easily. In addition, they charged that MWS was negligent for placing such a dumpster on a grass surface and not on a concrete slab.

As a baseline, however, Michigan courts accept the premise that every person engaged in the performance of an undertaking is obliged to use due care so as not to cause personal injuries or property damage. Thus, the key issue was whether MWS used ordinary care to avoid harming Shawn, whose presence on and around the dumpster was foreseeable.

MWS countered that it owed Shawn no duty. But even if a duty existed, MWS argued that there was no breach of duty because Brenda was the one who chose the location for the dumpster. In addition, MWS claimed that Shawn himself was negligent as were Brenda and Mindy in failing to properly supervise him.

After a three-day trial without a jury, the circuit judge ruled in favor of Shawn, finding that the design and placement of the dumpster rendered it inherently dangerous and that MWS’ negligence was the proximate cause of Shawn’s injuries. A three-judge panel of the state court of appeals, by a 2 to 1 margin, upheld the decision.

The plaintiff’s key witness was Steven Ziemba, who described himself as a "safety consultant." A graduate of Wayne State University with a degree in chemical engineering, Ziemba worked as a safety engineer with various insurance companies and conducted accident investigations. The work included looking for fire hazards, liability hazards and inspecting equipment.

On appeal, MWS focused entirely on whether the trial court properly considered Ziemba's testimony when it concluded that MWS breached its duty to Shawn. MWS maintained that, had the trial judge acted properly and refused to consider Ziemba's testimony, no basis would have existed for finding the company negligent. Appeals courts look for “clear error,” that is, obvious indications that the trial judge made a mistake. At the same time, appellate judges routinely defer to a trial court's superior ability to assess the credibility of the witnesses who appeared before it.

However, owners could enhance stability by retrofitting these dumpsters with bracing extensions. Ziemba also pointed to a 1984 CPSC product sheet that cited a number of studies showing there had been 13 deaths of young children due to lack of stability. He opined that an 80-pound child should not be able to tip over a properly stable dumpster. From an engineering standpoint, he testified as follows:

Well, simple terms is everything has a center of gravity for stability. *  *  *  Now that you have this slanted bin, you have this side, this extra weight on this edge, and that shifts it from the dead center over closer to the slanted side. Now you add additional forces or weight, such as a child pulling on it or hanging on it or anybody, and it's gonna tip over.

He never had an opportunity to examine the exact bin that injured Shawn. Instead, MWS offered a modified bin for Ziemba's examination. The modified bin had extensions and was also placed on a hard, level surface. Ziemba performed the pulldown test on the bin MWS provided and was unable to tip it at 75 pounds. He noted, however, that the bin was also placed on a hard, level surface. He noted that the bin Shawn pulled over did not have safety extensions. Indeed, the bin that injured the boy was the type that was previously banned.

Ziemba and Shawn’s attorney ultimately found a non-modified bin on MWS's property—that is, it had no base extensions. The bin was placed on a "dirt type" surface and plaintiff's counsel was able to tip it over with one hand. The two of them then went on a road trip to see if there were other such bins in the community. They found another unmodified container. It was on a hard surface and was only tippable with an extreme amount of force. The concrete pad placement made the difference. Ziemba believed that a grassy surface could become soft and mushy and that the dumpster that injured Shawn was "definitely not safe" and was the direct cause of plaintiff's injuries.

Defense counsel vigorously cross-examined Ziemba, eliciting a concession his chemical engineering background had nothing to do with dumpster design. Ziemba also acknowledged that his certificate as a certified safety professional lapsed about 16 years prior to trial. He was not certified as an expert in the area of human factors or ergonomics, nor was he a certified safety engineer. In particular, Ziemba had no training or experience with respect to dumpster design.

On appeal, MWS argued that Ziemba, although not offered as an expert, nevertheless purported to offer expert testimony that MWS breached its duty to Shawn and the trial court improperly allowed and considered such testimony. The appeals court disagreed:

Ziemba testified to what he observed at defendant's warehouse and relevant literature. It cannot be said that his testimony was overly dependent on scientific, technical, or other specialized knowledge. His testimony was "rationally based on his perception of the evidence that he found at the scene of the accident" and at defendant's place of business, . . . and, as the trial court noted, was helpful to a clear understanding of a fact in issue in the case.

MWS also claimed that the trial judge failed to find Shawn partially to blame. Generally, minors are not held to the same standard of care as adults, but need only exercise the degree of care that a minor of comparable age, mental capacity and experience would exercise under the circumstances. Not surprisingly, the appeals court brushed aside this argument, concluding that the accident was caused by the dumpster’s design and placement, not Shawn’s conduct:

MWS also asserted that the trial court wrongly failed to saddle Brenda and Mindy with some degree of fault. Again, the appeals court majority disagreed, noting that the judge simply refused to find that Brenda or Mindy had any responsibility for the accident. "[T]he dumpster was on ground and situated such that it should not have tipped over with the pressure of a 100 pound or less child,” the opinion stated. “Nonetheless, it did tip over on this young Plaintiff."

The dissenting judge thought the case was mishandled by the trial court and should have ended up as a win for MWS. Although the facts of the case were undeniably sad, he acknowledged:

The mere happening of an accident is not, in and of itself, evidence of negligence. *  *  *  The evidence at trial established that the dumpster should not have fallen, and yet it did.  *  *  *  In my opinion, plaintiff entered no admissible evidence to establish that defendant's negligence contributed to the dumpster falling, so the trial court should have entered a directed verdict for defendant.

In particular, the dissenter agreed with the company that Ziemba gave testimony he was not qualified to give, that the trial court improperly relied on that testimony, and that without his testimony, the plaintiff failed to prove his case.