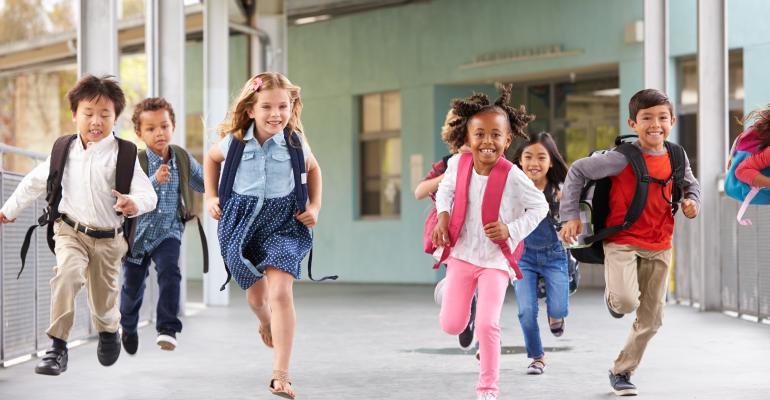 Parents of students who attend school in the DeKalb, Ill., Community Unit School District fought to detach their properties from the boundaries of the DeKalb District because of air emissions from a nearby landfill.

Armed with training and outreach materials supplied by the Clean Air at School’s: Engines Off program sponsored by the American Lung Association in Colorado, a dedicated group of parents, volunteers, students and teachers helped educate school communities about vehicle idling and the associated health and environmental risks that accompany it.

The Idaho Department of Environmental Quality reports that its Clean Air Zone Program is designed to motivate Idahoans to turn off their engines instead of idling. The program began in 2004 with a campaign aimed at encouraging school bus drivers and others not to idle on school grounds. To date, more than 300 Idaho schools and child care facilities have voluntarily joined the program.

“While school districts, boards, lawmakers and parents focus on new buildings, new boundaries, more money and more teachers, all will be undermined if Utah children arrive at school after inhaling a gauntlet of more air pollution,” according to Dr. Brian Moench, president of Utah Physicians for a Healthy Environment, in an op-ed piece in The Deseret News.

Meanwhile, in DeKalb, Ill., located 60 miles west of Chicago, parents of children who attend school in the DeKalb Community Unit School District (DeKalb District) petitioned the Regional Board of School Trustees (Board) to detach their properties from the boundaries of the DeKalb District and annex them into the Sycamore Community Unit School District (Sycamore District).  Their reason: air emissions from a nearby landfill.

At the Board hearing, the parents and the DeKalb District stipulated that the parents lived within 10 miles of both the DeKalb District and the Sycamore District, and the parents conceded that both districts have equally competent curriculums. Eight of the 12 parents submitted written statements focused generally on how they identified themselves as Sycamore residents rather than residents of the city of DeKalb or the town of Cortland and listed the recreational activities, public services and business activities in which they participated in Sycamore.

Parent Nicholas Cronauer's written statement cited an incident in January 2014, when students and faculty at Cortland Elementary School, located in the DeKalb District, were hospitalized "after toxic fumes (carbon monoxide) drifted from [a nearby] landfill and entered [the school's] ventilation system." He added that, by January 2015, the landfill's capacity had increased from 300 tons of waste per day to 800 tons of waste per day and that the "chance of future harm to our children from the toxic fumes is significant."

Cronauer attached a local newspaper reporting about the incident to his statement. According to one article, a contractor for Waste Management, the landfill operator, "hit a pocket of old decomposing garbage" while performing maintenance work, "releasing the odor, but no methane gas, into the air." James Briscoe, the DeKalb District superintendent, said that "wind carried the odor to the school less than a mile to the northeast." The article reported that 63 students and staff of Cortland Elementary were treated with oxygen for "minor carbon monoxide exposure."

The only parents to actually testify at the hearing were Charles Shephard and Cronauer. Shephard said that he knew about the incident at Cortland Elementary. He stated that he could smell the landfill when he drove by it but acknowledged that he was unaware of landfill emissions monitoring by either Waste Management or Cortland Elementary. He also testified that, because DeKalb County had increased the amount of waste that Waste Management could bring to the landfill, an additional 100 trucks would be driving to the landfill every day.

Cronauer testified that he believed that children would benefit from going to the same school as other members of their community. He also believed that the rural roads around Cortland Elementary were not safe and that school buses going to and from the school have to turn onto a road with a speed limit of 55 miles per hour. He also stated that just because Waste Management or Cortland Elementary monitored emissions from the landfill, "that doesn't mean it's going to prevent another accident from happening again."

Gorla testified that, in response to the landfill incident, meters had been installed in Cortland Elementary to monitor the air quality, and members of the school's staff were trained on how to respond if a monitor triggered an alarm. Since the devices had been installed, there had been no alerts, she added.

At the close of the hearing, the Board denied the detachment petition. The Board explained that "based on the evidence presented * * * there is no significant direct educational benefit to the [plaintiffs'] children if the change in boundaries were allowed."

The parents filed a complaint in the DeKalb County Circuit Court for administrative review of the Board's decision. On May 12, 2017, following a hearing, Judge Bradley J. Waller ruled against the plaintiffs, finding that all relevant evidence had been presented to the Board, which had not ignored any of it. He concluded that the evidence supported the Board's decision.  Following the trial court's ruling, the plaintiffs appealed.

In upholding the lower court ruling, the Illinois Court of Appeals commented on certain changes in the state school code adopted in 2016. Under the old version of the law, the regional board had to consider multiple factors simultaneously in determining whether a detachment petition should be granted. The 2016 amendments made things simpler: the board first decides if detachment would confer a significant direct educational benefit to a petitioner’s children. Without such a finding, a petition goes no further.

Here, the plaintiffs stipulated that the DeKalb District and the Sycamore District had comparable educational programs, and they were satisfied with the educational facilities in the DeKalb District. Their only concern was that the children would be safer by not attending a school close to a landfill. However, the appeals court found the plaintiffs’ evidence on this issue at the board hearing less than compelling.

“The evidence suggests that the landfill incident was an isolated event not likely to reoccur, as Waste Management had taken remedial steps to prevent such an incident from happening again,” the opinion stated. “Further, if such an incident were to reoccur, Cortland Elementary had trained members of its staff how to respond, thereby minimizing the risk that the children would become sick. As such, reversing the Board's decision would require us to determine that the plaintiffs had established that there would be a significant direct educational benefit to their children in not being exposed to a slight health risk that was unlikely to reoccur. That we cannot do.”

As they did before the Board, the plaintiffs argued on appeal that their children's health is at risk because of the high volume of trucks passing the school to get to the landfill. One of the plaintiffs indicated that the speed limit on the road adjacent to the school is 55 miles per hour.  However, the appellate panel noted that vehicles passing the school on school days when children are present may drive only 20 miles per hour. “Even if we were to assume that the traffic conditions are better in the Sycamore District, we cannot say that the plaintiffs' children would enjoy a significant direct educational benefit if they went to a school with less traffic going by,” the panel stated.