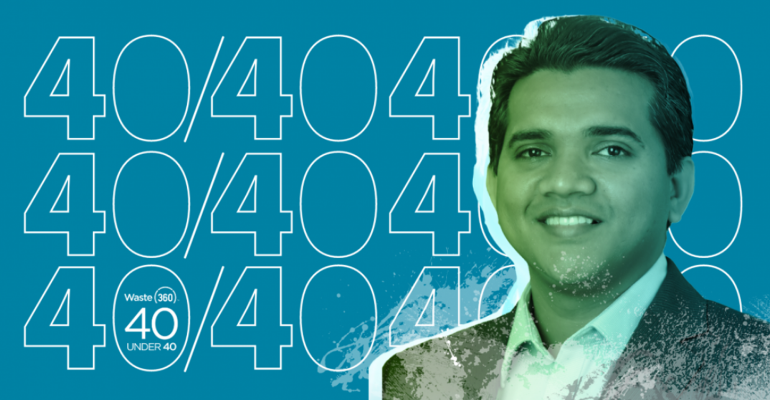 Kundral, who is a licensed Professional Engineer, has served small to multimillion-dollar projects with clients from both public and private sectors. In this interview, Kundral, who was a Waste360 40 Under 40 award recipient, discusses how he has helped to design creative solutions for landfill redevelopment projects.

This interview has been edited for length.

Waste360: What are your major responsibilities at SCS Engineers?

Som Kundral: As a senior project manager, I am responsible for helping to guide the project team to meet our client’s objectives. We deal a lot with the redevelopment of contaminated properties, old dumps—by which I mean sites that were not engineered to receive landfill waste. People started dumping because they are low-lying areas.

Because we are in South Florida, where land comes at a premium, developers are looking into all sorts of properties to redevelop them into commercial and industrial developments.

That’s just one aspect of it. The other aspects could be just the nature of a certain facility or industry that operated from the earlier days and back then the environmental regulations were not that strict. Some of those operations may have caused groundwater contamination or soil impacts, which eventually have to be addressed, because it’s about public health and safety and environmental protection at the end of the day.
Waste360: Can you talk about one of your projects and some of the considerations and challenges that you had to take into account?

Som Kundral: [I worked on] a 190-acre municipal landfill. Again, it’s called a landfill because obviously people started using this area for dumping, and eventually it grew as a landfill. But again, it’s not an engineered fill where you have the bottom liner. Anything that was dumped in there eventually decomposed and led to groundwater contamination. … [The question was], how could the developer redevelop that site? There were several strategies that were looked at to resolve this, but there were either budget constraints or schedule constraints. They were either technically infeasible or economically infeasible, one of the two.

We are now called SCS Engineers, but prior to SCS, we were ES Consultants, a smaller firm, we had a contract with the prime, working on [the project]. We teamed up and came up with a strategy to have a remediation system at the property boundary, to essentially intercept contaminated water from leaving the site. Ultimately, disposing of this through a 3,500 ft. deep injection well.

We came up with that strategy—it worked well; it was within the budget, and allowed the client to [work] with different developers to be able to develop this property.

It’s still ongoing. I would say, about 50 percent of the landfill has been redeveloped. The other 50 percent is being planned. With that remediation system within that budget, we were able to open up the doors for different developers to redevelop that site. Eventually this would create jobs, increase the tax benefit to the city, while protecting the environment.

I was mainly involved in supporting that strategy. My role was mostly dealing with the data, research interpolation, and a lot of other things that went into meeting the objective.

Waste360: What do you like the most about the work that you do?

Som Kundral: I think it’s really challenging. These are not just straightforward projects. I work on large-scale projects, and they are complex. They require a lot of coordination and thinking outside of the box.

We don’t work in isolation. We work with civil engineers, and geotechnical [professionals] to understand why a certain feature is proposed in a certain location. In the process, we can come up with some decent solutions. And I really enjoy working with our clients.

Waste360: What educational background prepared you for what you are doing today?

Som Kundral: My background is civil engineering. I did this in India. I worked as a site engineer, essentially overseeing construction, but then I noticed on one of the projects that the lake had foam on it. That foam was the result of industrial waste that was being discharged. It was flying up in the air. That’s when I decided I should consider doing something different. I chose environmental engineering. I came to the States, did my master’s, and after five years I got my engineering license. So, I am just continuing to learn and grow.

I have learned that where I am today is the result of two things: having a good mentor. It’s not like mentors are just available. Look for a mentor, and it’s OK if they’re not available. Be patient. The second thing is: do your part. Not everything will be spoon-fed or taught. Some things you have to do on your own—whether it’s working on the weekends or learning on the weekends or evenings. I think those are things that will take you to good heights.