Letting the Sunshine In 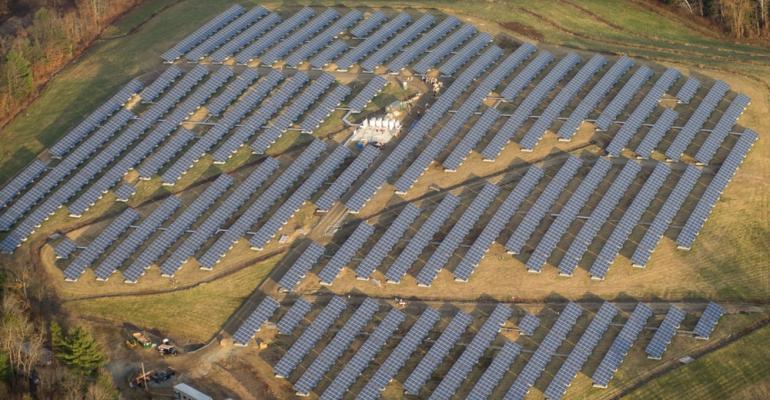 Following a solar landfill project in Easthampton, Mass., from concept to completion. 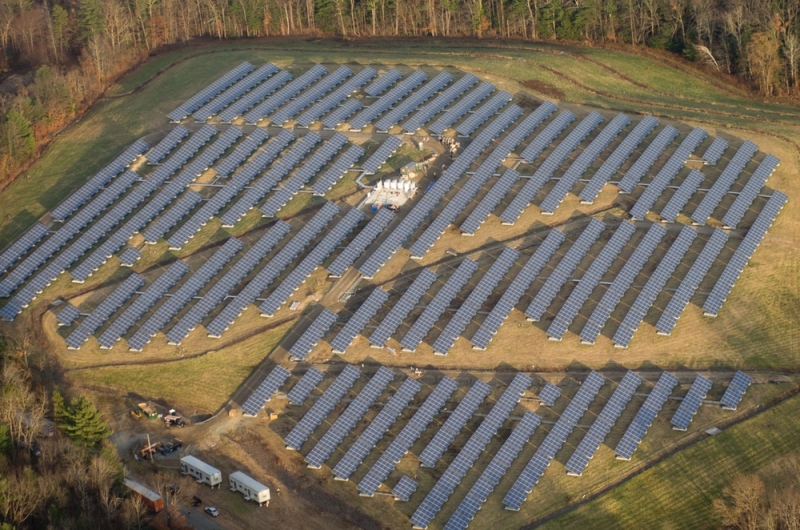 As the solar industry moves from rooftop systems to commercial and industrial-scale ground-mounted systems, capped landfills – large, low-sloping, shade-free surfaces– are proving excellent candidates for solar development. Many municipalities and private landfill owners see solar as a way to generate revenue from otherwise unusable properties by either leasing the sites, purchasing the lower-cost power or both. Capped landfills require monitoring and maintenance, and the revenue generated through the installation of a solar array can offset these costs. Additionally, landfills with gas-to-energy systems already have electrical infrastructure onsite that can reduce the cost of developing a solar power installation.

The city of Easthampton, Mass., saw an advantage in pursuing a landfill solar project. To participate in Massachusetts’ Green Communities program, Easthampton needed to reduce its energy use and carbon footprint. Additionally, during the city’s master planning process the citizens of Easthampton said that a large-scale solar energy project and the ability for the town to purchase low-cost green power were priorities.

After a feasibility study was performed, the Oliver Street Landfill was identified as an ideal location for solar. Under the leadership of Mayor Michael Tautznik, the city of Easthampton installed a 2.3-megawatt solar array, which will generate 2,828,000 kilowatt hours (kWhs) annually – enough energy to power 580 homes. The process solidified Easthampton’s position as one of Massachusetts’ inaugural Green Communities.

Shedding Some Light on the Process

The Oliver Street Landfill site was considered ideal for several reasons: It is large, it is relatively flat, it is near the existing power grid and it has little shading. The city reviewed detailed site drawings generated as part of the landfill closure a decade and a half earlier, and worked with city agencies to determine what local permits would be required. These two steps are important to the due diligence process and result in well-informed bid documents. In 2009, Easthampton issued a public bid and a request for qualifications (RFQ), receiving several responses from qualified solar developers.

Solar developers responded to the RFQ by presenting their qualifications and experience, as well as conceptual designs of the proposed solar arrays for the landfill site. According to Easthampton representatives, the proposals were detailed and easy to compare, which is a direct result of the quality of the RFQ they issued.

In 2010, the project was awarded to San Diego-based Borrego Solar Systems, Inc. Easthampton entered into a utility credit purchase agreement (UCPA) with the developer, defining the terms under which the city is able to purchase the solar power the system produces. As the financier (owner) and commercial solar installer, Borrego Solar is responsible for installing, testing, commissioning, operating and maintaining, and ultimately disassembling and decommissioning the solar energy system at the Oliver Street Landfill, which allowed the city to enter into the UCPA contract with no outlay of capital. 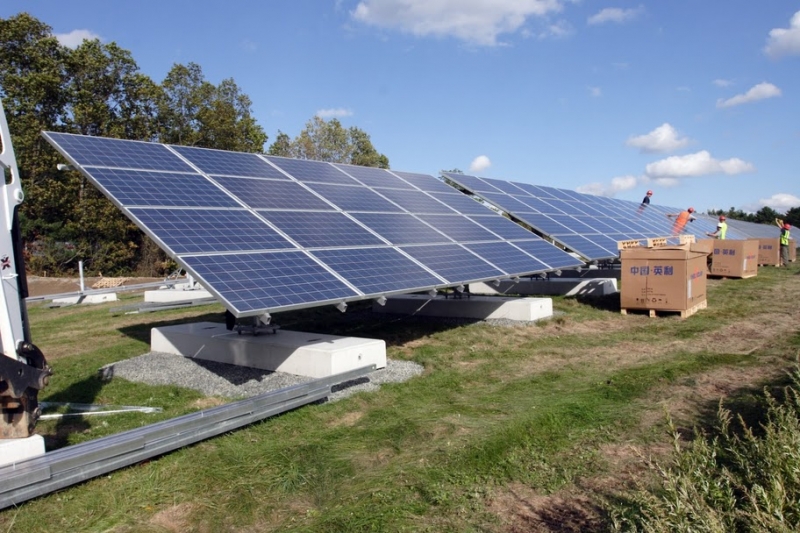 Under the UCPA, Easthampton will purchase the electricity produced by the system at 6 cents/kWh for 10 years. At the eleventh year of the contract, the city can opt to extend the contract, purchase the solar array at fair market value or have the system decommissioned and removed from the site. As a result of this public-private joint venture, Easthampton is predicted to reap $1.4 million in energy savings over the 10-year contract, and the solar energy system will generate enough power to supply electricity for 20 percent of the municipal buildings across the city. The city also will receive tax revenue from the system for the length of the contract term.

Borrego Solar designed the solar array and determined the appropriate grid-interconnection method, considering region-specific electric and building codes. They worked with engineering firm Tighe & Bond of Westfield, Mass., to provide landfill engineering design and permitting for the system, which was done in consultation with the Massachusetts Department of Environmental Protection (MassDEP) as the overseeing state agency. Components installed for the Oliver Street Landfill project included solar modules, mounting substrates, system foundations, wiring and connections, power inverters, transformers, service and metering equipment, and interconnection equipment to tie into the local utility distribution system. The project covers approximately 11 acres of the landfill surface in the more gradually sloped areas –  generally less than 8 degrees for a ballasted system.

The typical permitting process for landfill solar projects in Massachusetts and other states includes obtaining a permit for use of the landfill from an overseeing solid waste state agency, local permits and approvals from various boards and agencies such as the planning, zoning boards and conservation commission, and an interconnection permit with the local utility. MassDEP is typically concerned about how the construction and operation of the system will impact the landfill cap’s integrity and functionality.

In order to protect the landfill cap and minimize the risk of penetrating the protective membrane, the Oliver Street system was designed to sit on the landfill’s surface. With this ballasted approach, no excavation or disturbance of the cap was required. While Borrego Solar further refined the system design, Tighe & Bond planned a network of access roads that would enable heavy trucks, generally unsuitable for capped landfills, to drive on the site. The roads are composed of crushed stone pads, creating a uniform surface for installing the 500-pound ballast blocks to which the solar racking and modules are anchored. Contractors had to complete a geotechnical assessment of loading on the cap during construction and after, and evaluated the array design for impacts to the landfill’s stormwater drainage systems. Through the various design steps, modifications were made to the solar system design to best meet the state’s requirements, as well as the goal to maximize energy production.

An Easthampton ordinance required Borrego Solar to submit a special permit to the city’s planning board for review, and a public meeting was held. At the meeting, neighbors voiced opinions about the project, providing an excellent forum for Borrego Solar and the city to hear, and the opportunity to directly address, the concerns of people living near the project site. Neighbors also came to the meeting to show support for the project.

Some of the issues raised by the neighbors included concern related to glare-off of the photovoltaic modules, and impact to the views from their residences. Borrego Solar addressed their concerns by explaining how solar modules work by absorbing sunlight rather than reflecting it and that any glare produced by the system is unlikely. A three-dimensional rendering of the system showed that the highest point of system elevation – the top of the highest row of solar modules on the racks – was actually below the tree line and would not be visible to the neighbors.

Supporters of the project were in favor of the city taking steps to become a Green Community, supporting the clean energy economy, generating local jobs and lowering the city’s dependence on fossil fuels.

Typical concerns for municipalities where large-scale solar ground mount systems are proposed include limiting site accessibility from the public for safety, lighting impacts, prevention of soil erosion during construction, impacts to 100-year flood zones, the amount of forest clearing needed, impacts to wetlands and other natural resources, and impacts to traffic and noise during construction. Easthampton had similar concerns.

To address these issues, all of the ground mount arrays are fenced to prevent access and meet applicable code requirements. Typically, no lighting is needed for the arrays, and it is only installed if the client or municipal host requests it. Soil erosion and other construction impacts are managed through permitting with the state and at the local level through stormwater pollution prevention plans and mitigation measures designed to protect sensitive areas such as wetlands or surface water bodies.

Landfill sites are ideal for solar installations because they typically must be kept clear of trees and shrubs in order to protect the cap. The construction of the system at the Easthampton landfill took three months, and the impacts to local traffic patterns were minimal and over a short period of time.

Overcast: The Impact of Inclement Weather

Fall 2011 was a season of unexpected weather in western Massachusetts and New England. During construction of the array, the region experienced unusually heavy and frequent rain events, and the driving equipment on the landfill was monitored carefully to ensure construction activities were not causing damage to the cap. Hurricane Irene further tested the practices used to manage cap impacts during construction. But with careful management, the project continued without significant delays. In October, a freak New England snowstorm dumped more than a foot of snow on the project, which added to the stormwater draining off the site and could have resulted in very muddy conditions. Equipment access to the site was carefully managed to prevent rutting and the project remained on schedule. 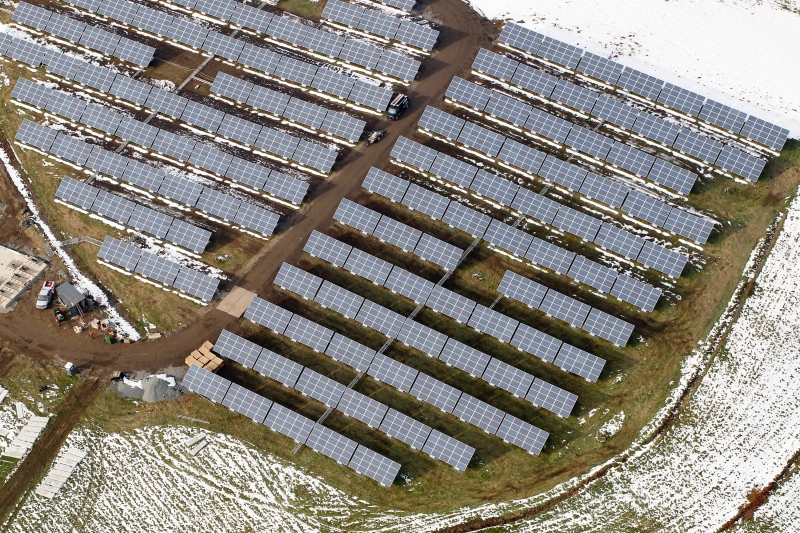 MassDEP officials visited the site on several occasions to make sure that the onsite activities combined with the extreme weather were not impacting the landfill cap, and the project was deemed a model of best practices to use when developing a landfill for post-closure use. Borrego Solar attributes the success of the project to exceptional site and civil engineering, careful system design with options to fall back on depending on site conditions, selection of a qualified site contractor with landfill experience, and slowing down construction when the weather and cap conditions required it.

The construction of the solar array was completed in three months, despite the weather, and the project was completed within one year of Borrego Solar signing the contract with the city, as promised.

Currently, the Oliver Street Landfill solar system is completed and commissioned, and the developer and the city are eagerly waiting for the local utility to complete the required upgrade to the local distribution system needed to connect the system to the grid. The project is scheduled to go online in the spring of 2012, and the city is looking forward to the energy savings. Once the array is connected, the system owner (Borrego Solar) will operate and maintain the system for the length of the UCPA contract. They will be responsible for maintaining vegetation in and around the array, which covers the majority of the landfill cap. This structure also saves Easthampton $10,000 to $15,000 a year in landfill maintenance costs.

The project is a testament to how forward-thinking communities can take advantage of previously untapped land resources.

Amy McDonough is a project developer for Borrego Solar Systems Inc., and a LEED-accredited professional. She is based in Massachusetts.