Preventing and Dealing with Landfill Fires 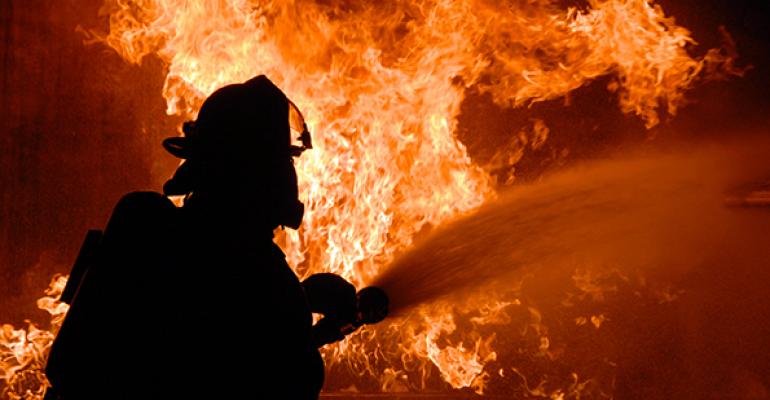 An effective fire response plan can include an incident command structure, which needs a number of focused groups.

Landfill fires occur daily somewhere around the world—over 8,000 of them a year—and are fairly common in the U.S. Surface fires are usually extinguished fast, often because of structured fire response plans, good communication and solid partnerships with emergency responders.

An effective fire response plan can include an incident command structure, which needs a number of focused groups. Stakeholders commonly involved include landfill owners, local fire departments and contractors, depending on capacity, experience and availability, says Tony Sperling, president of Landfill Fire Control in Vancouver, B.C.

“One key we find is that training with the fire department is a really effective way to build relationships and ensure successful responses,” says Sperling.

The two entities can learn from each other. Fire departments may not begin with a full understanding of how to handle landfill fires; they learn on site, through these relationships. While landfill staff learn from firefighters how to avoid smoke exposure and general safety.

The Metro Waste Authority for Central Iowa has had a few events, most recently in the summer of 2017, when equipment caught on fire.

“If they aren’t handled properly these fires can quickly get out of control,” says Michael McCoy, Metro Waste Authority executive director.

In this case, the bulldozer operator knocked down the fire with his on-board extinguisher, but this did not fully extinguish the flames.

“We brought in a water truck we always have filled on site, which has fire hose nozzles, and our staff sprayed the bulldozer down. [Generally large water volumes are not recommended without a fire suppression agent, so the extinguisher is critical],” McCoy says.

It was a relatively small blaze, but the authority was able to put it out in 20 minutes.

“We did not have to wait for the fire department, but if we had to, we could have fought it with two water trucks while waiting for them,” says McCoy.

The Metro Waste Authority has a written landfill fire risk management plan. This optional plan was expensive to put together, but has been worth the investment, says McCoy. The 164-page document contains critical details, like specific site locations, equipment inventory, soil supplies and water supplies.

“Many of these things are changing and moving, so we update this document and use it to keep track of, and look up, important information,” he says.

The authority also has a summary of the information in the document that is supplied to local fire and police departments.

The approach to managing a fire varies, depending on the depth of the fire; surface stability, which determines whether it’s safe to put equipment on that surface; and if the fire is getting oxygen from below the waste pile. Without a geomembrane liner, oxygen can get in and feed the fire, warns Sperling.

And there is a two-step process: first to control the blaze, and then to fully extinguish it.

On control mechanism is to have fire breaks in the form of low vegetation around the landfill perimeter. That can prevent a fire in one cell from spreading to another.

Then there are active control measures.

“Control it until you have no open flame or minimum smoke. Once it is under control, actual extinguishment methods vary … The best solution is site specific,” says Sperling.

Some extinguishment methods are covering fires with dirt, doing a full overhaul of the area or injecting water.

The most common fires occur at the landfill surface. They often happen where there are hot objects, or overdrawn landfill gas collection systems, according to CalRecycle.

Subsurface fires usually start from overdrawing a gas collection system or spontaneous combustion. Subsurface fires are more complex to deal with. (Separate from that, as well, are also the issues raised by elevated temperature landfills or exothermic reactions.)

Subsurface fires typically burn slowly without noticeable flames or much smoke. They are detected by elevated temperature at the well head or by soot in the gas collection system, according to CalRecycle.

But good daily operations are as essential as technology, such as thoroughly covering waste daily and keeping a small active face. Cover side slopes and decks; and do regular compactions. Also, avoid storing large volumes of recyclables; wood or brush, segregated plastics and tires especially are risky.