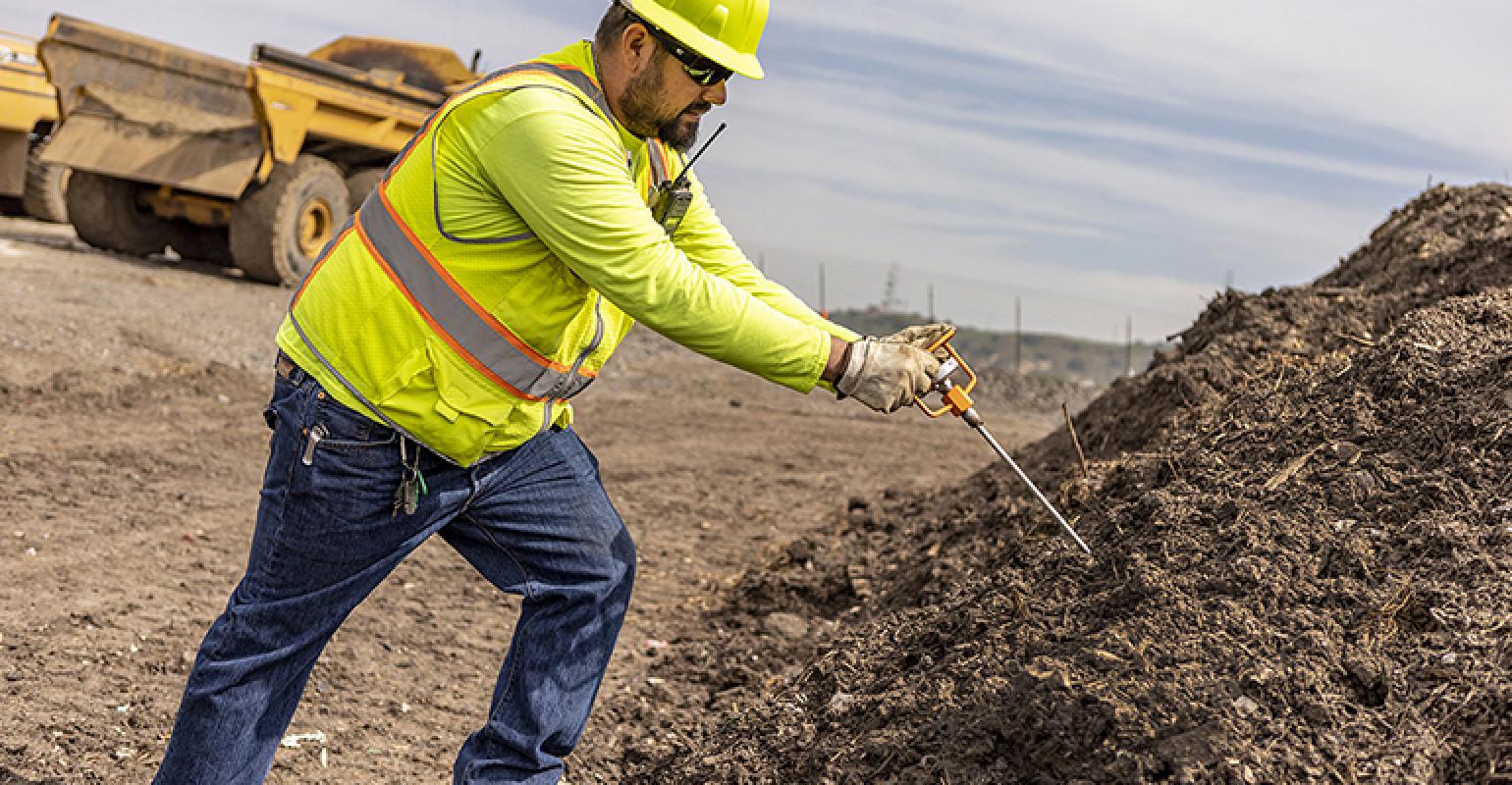 As it braces for enforcement of the state’s organics diversion law, Orange County is working to create other beneficial uses for its green waste.

For decades, Orange County in California has taken residents’ green waste at no charge, using it as daily cover at its three landfills and earning diversion credits for the practice. But credit for this cover application went away January 1 with the passage of California’s AB 1594, which redefines processed green material used for alternative daily cover as material for disposal.

So, OC Waste & Recycling (OCWR) is working to create other beneficial uses for the tonnage of green waste it receives. The agency took 513,000 tons in 2018 alone for use as cover, saving cities more than $17,000,000 in disposal costs.

Anticipating the changes imposed by AB 1594, OCWR began working nearly three years ago to find another use for the material that would enable it to earn credits while helping communities meet new organics diversion requirements, with plans to offer them products made from their waste.

OCWR’s efforts began with the launch of three compost pilots in March 2018—one at each of its landfills.

Tom Koutroulis, director of OC Waste & Recycling, anticipates two of these sites will be permitted for full-scale compost operations in fall 2020 and the third in 2021.

“We have evolved our business model, using existing resources. Our goal is to soon be able to put product we produce from this green waste back in communities where it came from to be used as soil amendment,” says Koutroulis. 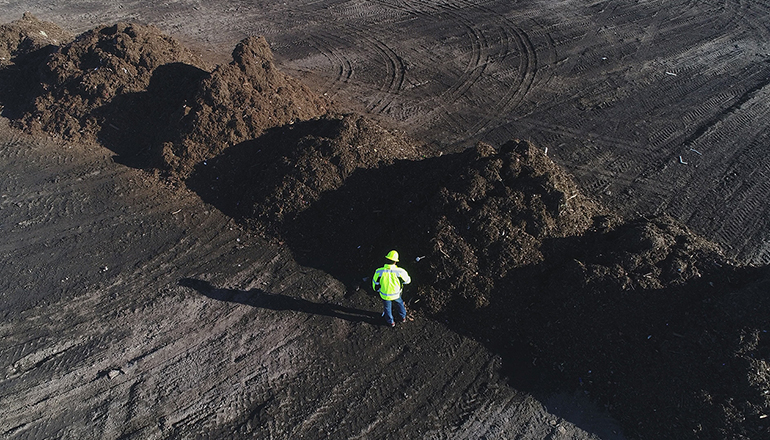 While the pilots are small scale, the plan is to eventually compost about 800 tons a day total of residential material at all three sites.

Through this major undertaking, OCWR has ridden quite a learning curve, which has entailed bringing in all operational departments of the agency, with representatives from each now trained in composting.

“We mostly bury and compact waste, and now, we are on the top deck creating green waste trapezoid-looking windrow piles. From there, we are tracking temperatures and turning, watering and flipping piles. Then, we screen into two or three different soil amendment materials with different applications. It’s a whole new operational technique,” says Isaac Novella, manager of OC Waste & Recycling.

Staff from all departments have been involved in processes, from testing for pathogens, metals and toxins to determining consistency of material and how to control odor. Working toward mastering composting has also entailed figuring out how to ensure contamination levels do not exceed .5 percent.

“We met with haulers prior to starting pilots and have since provided feedback from our inspections as far as contamination levels. Sometimes, at first, we had to turn away loads because there was too much contamination. What has helped is letting haulers know what was needed in the way of additional upstream education of residents,” says Koutroulis. 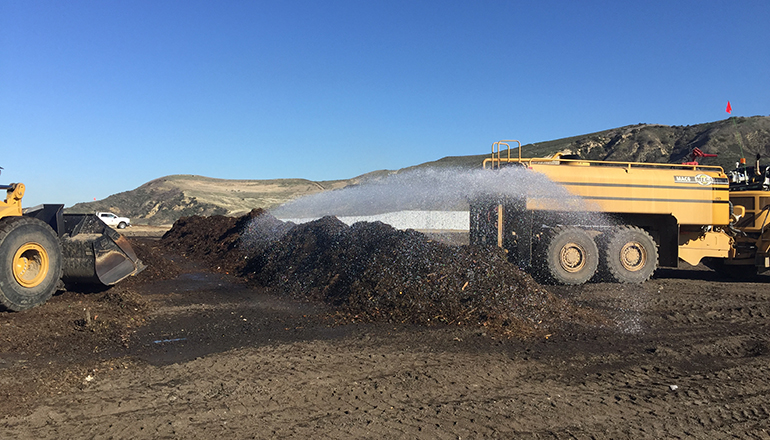 “So, the question was could we take what was at the bottom of the barrel and convert it to compost? We found that we could,” says David Tieu, OCWR deputy director of the Central Region Landfill Operations.

Lab testing has shown the product to be stable, below the .5 percent contamination threshold, and good for all soil amendment applications (including gardens, native landscape areas and open park areas). An odor minimization plan was developed that identifies odor management practices, such as keeping the pile to a small size and efficient aeration.

Plans are to target municipalities and state agencies that can use the compost products in their landscaping and roadside projects. Specific market details have yet to be finetuned, but once the county knows jurisdictions’ procurement requirements, to be determined by the California Department of Resources Recycling and Recovery (CalRecycle) and SB 1383, it will partner with cities and build a procurement system based on those requirements. This should happen early in 2020.

OCWR is now constructing two full-scale operations, and the third one is in the planning stages. All of the pilot projects are currently occupying about a half-acre. The Bee Canyon Greenery located at the Frank R. Bowerman Landfill will scale up to 30 acres total. The Capistrano Greenery at the Prima Deshecha Landfill will scale to 18.6 acres. The Valencia Greenery at the Olinda Alpha Landfill is in the conceptual phase, with plans to operate on about 15 acres.

“We are trying to create infrastructure for green waste management that’s lacking in Orange County to help cities comply with SB 1383. And these sites will be in operation after the landfills close, so we are putting a lot of time into planning to make sure they can run effectively and serve as resource recovery facilities into the future,” says Tieu. 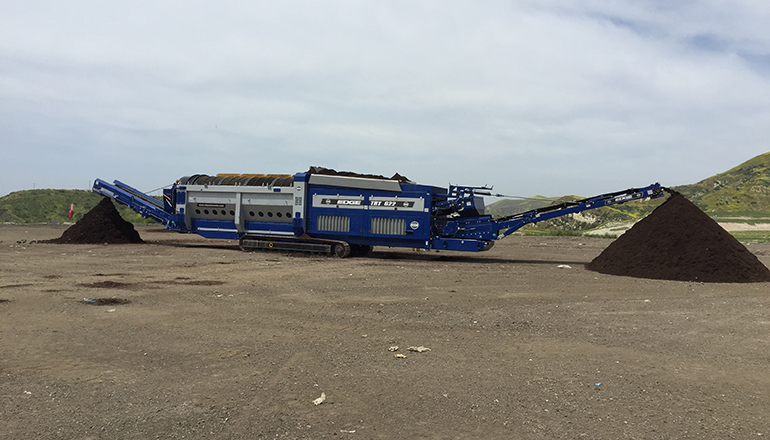 The pilots were largely driven by a resolution of the Orange County Board of Supervisors, which directed OCWR to research opportunities and develop strategies to achieve state organics recycling mandates.

“The board resolution helps send a message that the County of Orange is making organic waste recycling and diversion a priority; not simply in response to industry-transforming legislation but also to support environmental stewardship for future generations,” says Lisa Bartlett, chair of the County of Orange Board of Supervisors.

“We are only looking at yard waste now because it has the largest impact. We are also starting with this one stream because we have to crawl before we walk. And walk before we run. But the goal is to eventually expand where we can to meet cities’ needs,” says Koutroulis.

As Orange County awaits permits to launch full-scale operations, it has submitted applications for CalRecycle composting grants that would provide startup funding to help with construction costs.

“If we get to full capacity over the next few years, we will achieve what we want. And I think we will do this,” says Tieu.