Odor Management at Landfills: Part 1 - The Current State of the Art 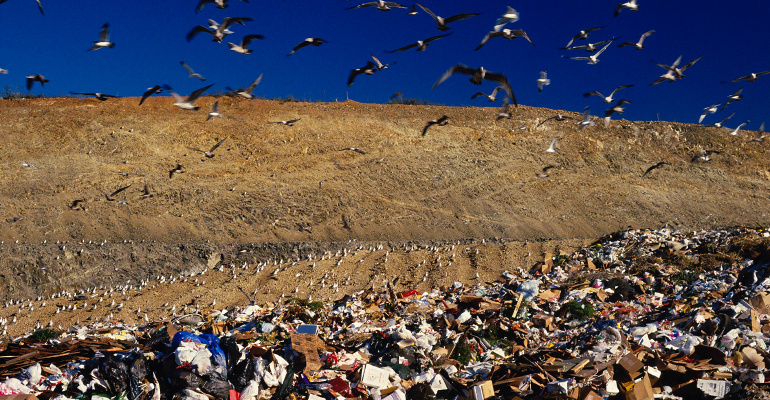 Generation of odors from solid waste management operations is a common occurrence due to the nature of the waste material and the anaerobic decomposition of its readily biodegradable components.

Ritzkowski et al. (2006) estimated that emissions of airborne pollutants can last up to 30-100 years after the solid waste facility is technically closed. Ideally, solid waste management facilities are to be located far from further human contact, but population growth, sprawling development, and transportation optimization have led to public encroachment in areas surrounding urban solid waste management facilities, with this essential infrastructure now having to operate in closer proximity to potential receptors than initially intended.

This situation can lead to sharp increases in odor complaints (Vidovic 2018). Nuisance odors may even impact the ability to meet permit obligations, potentially leading to millions of dollars in re-siting, litigation, enforcement, and mitigation costs. Dealing with nuisance odor complaints is a key issue for solid waste facilities; however, current odor measurement techniques are subjective, largely inaccurate, or irreproducible, causing challenges for even the most responsible solid waste facility managers.

While odor complaints from industrial facilities have increased over time, the technology for detecting and characterizing complex odors has not developed to the level of a reliable surveillance method, which has hindered regulatory frameworks.

Current approaches to odor measurement and regulation vary greatly among local jurisdictions, states, and countries. Regulatory tools have ranged from relatively simple qualitative measurements or checklists of perceived odor and/or specific chemicals to the more complex use of electronic nose technology and atmospheric dispersion models to predict odor impacts on neighboring receptors.

State of the art analytical measurements that characterize a specific odorant in terms of its chemical composition and concentration are objective, repeatable, and accurate; however, they provide little information about odor perception by human receptors (Lebrero et al. 2011), and they can only detect known odorant compounds on an individual basis, making analysis time-consuming and expensive.

Hypothetically, the odor contribution of waste facilities should be measured by identifying, sampling, and quantifying the concentrations of all odorants from all odor sources. But this is extremely difficult to accomplish due to the nature of the wide variety of compounds known to cause odors at industrial facilities (Paxeus 2000; Bruno et al. 2007; Kjeldsen 2010).

Fang et al. (2012) investigated the odor emissions from different areas in a solid waste disposal site, and identified dozens of specific odorants, some of which are known to have very high odor intensity even at extremely low, difficult to detect levels. In real air samples from solid waste management facilities, sulfur compounds tend to have much higher concentrations than other trace odorants and tend to dominate the odor profile, at times.

However, based on psychological testing, seven primary classes of olfactory stimulants have been found to generate specific responses in separate human olfactory cells. Each of these classes can have many different compounds that contribute to the odor profile, many of which do not have analytical methods.

With these general limitations in mind, there are a number of odor detection techniques that are currently in use (Figure 1). These include field and lab olfactometry, electronic noses with chemical sensors (artificial olfaction), atmospheric dispersion modeling, and gas chromatography/mass spectrometry (GC/MS), but no single method has been demonstrated to effectively quantify odor annoyance, and most odor measurement techniques currently available depend on subjective human assessment for detection, calibration, and validation. 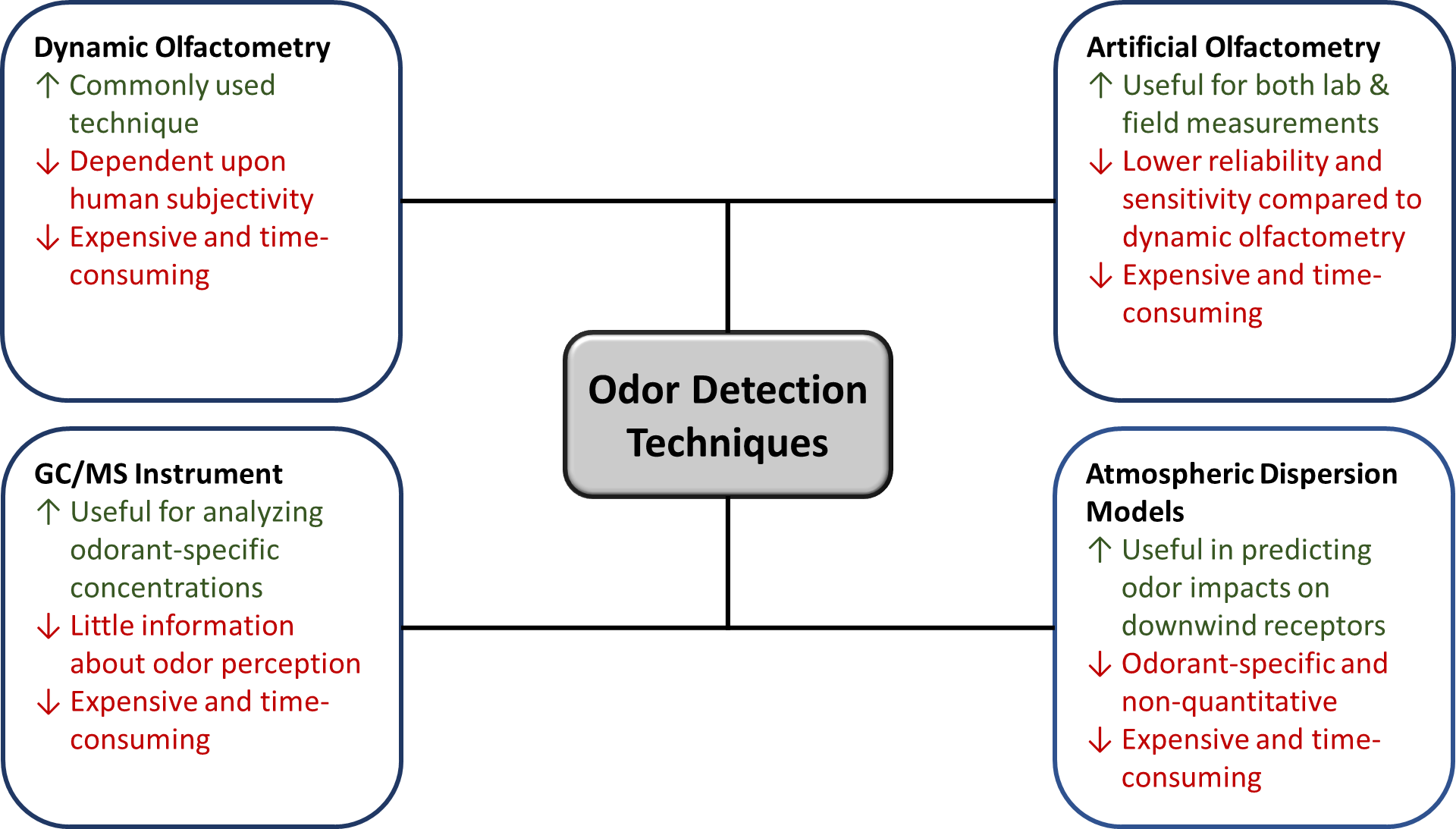 In practice, to attempt to quantify odor perception, human panelists are utilized. This technique is known as dynamic olfactometry, and since human responses to odor can be subjective and vary among individuals, multiple panelists with tested sensitivities within a controlled range are required to reduce the uncertainties.

Both field and laboratory olfactometry measurements have been used to detect odors at different magnitudes. Panelists are selected according to their sensitivity to n-butanol in the range of 20-80 ppbv (Laor et al. 2014). The panelists are then exposed to a stream of odorless air.

The concentration of the odorant gas in the air is slowly increased until all members of the panel can distinguish the smell of odorant (St. Croix Sensory 2005; Baltrėnas et al. 2012). The concentration of the odorant can then be determined by applying sophisticated statistical methods to the panel results (Laor et al. 2014). These techniques can be conducted in the field or in a more carefully controlled environment in the lab, but olfactometry is cumbersome, expensive, subjective, largely inaccurate, and not reproducible.

Furthermore, the technique cannot be applied to poisonous gases without risking the panelists’ health (Yuwono, & Lammers 2004). Although olfactometry provides some measure of relative odor magnitude, it does not provide information on the level of the nuisance experienced by the population or the effective contribution of individual components of the odorant mixture (Jiang 1996; Sneath 2001).

Moreover, if a mixture of odors is present, this technique does not allow the constituent odors to be identified or quantified separately. One odorant may dominate over another (at least periodically), or several different odorants may be perceived simultaneously or synergistically but interpreted as an individual unpleasant smell.

Alternatively, odors have been monitored in real-time by artificial olfactometry in which instruments such as the electronic nose technology replace the data obtained from human panelists. This technology mimics the olfactory system and consists of a multiple sensor array coupled to a data acquisition system and pattern recognition algorithm.

The multiple sensor array acts like the olfactory receptor network in the nose. It is made up of a number of chemical, electrical, optical, mechanical, and/or piezoelectric sensors along with a transducer (Yuwono & Lammers 2004). The sensors chemically interact with a specific odorant to detect its presence, while the transducer converts the chemical change to a measurable electrical impulse.

The data acquisition system acts like the olfactory nerves in the nose that capture the electrical signals and delivers them to the pattern recognition algorithm, which acts like the brain to process the signals by using sophisticated multivariate statistical models.

Patterns from known odorants are used to construct a database and train the pattern recognition system so that the unknown analytes can subsequently be classified and identified. This training process is similar to how odors are interpreted in the brain over a lifetime of exposure.

Although the unit replaces human noses with chemical sensors, it is still calibrated to laboratory olfactometry measurements, which again is limited by the human subjectivity factor (Delgado-Rodríguez et al. 2012). In most cases, the sensors are specific to one compound, and are not particularly useful in detecting complex odors in the field.

Atmospheric dispersion models have also been used to predict odor impacts on downwind receptors. However, this technique depends on accurate measurement of odor concentration at the source, which must be estimated using subjective olfactometry or electronic nose measurements, and assumes constant temperature, humidity, pressure, wind speed and direction, which is often not realistic.

Furthermore, dispersion models merely predict the number of dilutions needed to reach a perception threshold at a certain distance from the emission source. Such models cannot entirely predict odor annoyance unless the relationships between odor concentration and perceived intensity and offensiveness can ever be determined with certainty (Laor et al. 2014). Furthermore, they also suffer from being odorant-specific and non-quantitative (meaning they must be calibrated using subjective methods), much like the other techniques already discussed.

Gas chromatography (GC), which is a separation technique, paired with mass spectrometry (MS), which is a detection technique can be a powerful tool for quantifying certain classes of specific odorants. An advantage of GC/MS is that very small concentrations of specific constituents can be detected and quantified.

For this technique, the odor is collected in the field and then brought to a lab, where the sample is passed through an instrument containing a heated chromatographic column where the target constituents in the sample get selectively adsorbed, retained, and then released as a pulse, while the column is purged with an inert carrier gas (Yuwono & Lammers 2004).

The mass spectrometer detector smashes the sample and analyzes the mass and charge of the resulting fragments as a fingerprint to identify the original compound that was separated from the sample by comparing to a reference library of known compounds.

There are a few disadvantages to using this method. Essentially GC/MS is a method of measuring the concentration of specific compounds in the air sample. At times, the intensity of odors does not match with the concentration of the compound. It may be that a very small amount of the compound is present, but the odor intensity is quite high. Thus, GC/MS is not able to give information about the actual intensity of the odor or synergistic or masking effects (Davoli et al. 2003; Zarra 2007; Belgiorno et al. 2013).

Therefore, GC/MS is another method that measures the concentration of odorants rather than odor intensity, which often do not correlate with each other (Gardner and Bartlett 2000; Davoli et al. 2003; Zarra 2007; Belgiorno et al. 2013). Also, the technique is limited to analyzing compounds that can be successfully separated in a gas chromatographic column and that are referenced in published libraries of known odorants.

Another issue is the relative cost of the instrument and analytical method development, as well as the higher skills required for the analyst running the instrument (Gardner and Bartlett 2000).

Because GC/MS methods are odorant-specific, odor characterization becomes an expensive procedure to run various columns and methods and instruments with the same sample to generate a picture of all of the odorants present in the sample and their concentrations. This is generally not feasible or reproducible due to costs, time, and complexity (Yuwono & Lammers 2004).

To summarize, the conventional techniques discussed here have many limitations in that they all seem to require some degree of human subjectivity in the analysis and many are overly complex and costly, even though they do not always effectively characterize odor strength and concentration of field air samples. Also, some techniques are not good predictors of the actual odor intensity and thus are non-quantitative.

Therefore, while great strides have been made with regard to understanding odor science, there is still a need for continued research to overcome the uncertainties associated with odor monitoring and prediction needed for development of an odor measurement technique that can objectively measure odor intensity and do so at a low cost.

In Part 2 of this series, a potentially game-changing new technology that uses human odorant binding proteins to detect nuisance odors is explored.

St Croix Sensory, I. (2005). A review of the Science and Technology of Odor Measurement.

Dr. Meeroff is Professor and Associate Chair of the Department of Civil, Environmental & Geomatics Engineering at Florida Atlantic University. He is also the Director of the Laboratories for Engineered Environmental Solutions (labees.civil.fau.edu) with over 20 years of experience in solid/hazardous waste management, pollution prevention, and environmental engineering research. Email:[email protected]