The second of a three-part series, this article talks about biological reactions that occur in landfills.

This is Part 2 in a three-part series. Click to read Part 1 and Part 3.

A small percentage of municipal solid waste (MSW) landfills in North America have reported elevated and increasing temperatures above those normally associated with a hot gas well. Temperatures above 66 °C (150°F) or even 121 °C (250°F) have been reported in some cases. In Part 1 of this three-part series on elevated temperature landfills (ETLFs), we described some of the challenges associated with ETLFs, reviewed the difference between a fire that requires oxygen and subsurface processes that occur in the absence of oxygen, and explained appropriate gas collection system management strategies for ETLFs.

The conversion of MSW to methane (CH4) and carbon dioxide (CO2) in landfills is a biological process that requires the coordinated activity of several groups of microorganisms. The major components of MSW that are converted to CH4 and CO2 are paper, food waste and yard waste. In addition, some landfills accept other wastes that may be biodegradable such as biosolids.

Operators typically think about waste composition in terms of paper, food waste, metal, plastics, etc. However, for purposes of biodegradation and gas generation, understanding the compounds that actually biodegrade is helpful. These compounds include cellulose (C6H10O5)n and hemicellulose (C5H8O4)n, as present in paper, yard waste and wood; as well as starch (C6H10O5)n, proteins (C5H7NO2) and fats (C57H104O6), as present in food waste. The sortable and chemical composition of discarded MSW are presented in Figures 1 and 2. Figure 1 is based on recent data from the US EPA while Figure 2 uses published data on the chemical composition of each waste material to estimate the overall chemical composition of discarded MSW.

What Happens When We Bury MSW?

The conversion of MSW to CH4 and CO2 in a landfill is often described in a series of four phases that correspond to the biological processes described in this section: (1) the aerobic phase, (2) the acid phase, (3) the accelerated methane phase, and (4) the stable methane phase. The reactions in these phases require the coordinated activity of several groups of microorganisms.

The aerobic phase occurs first, when air (21 percent oxygen, O2) is entrained in MSW at burial. Once the oxygen is consumed by aerobic biological processes, more oxygen should not be available unless the waste is not covered, is covered with permeable daily cover that allows air intrusion (e.g., when subjected to strong prevailing winds), or the gas collection system is pulling air into the landfill due to improper design or operation. The O2 initially in the waste is consumed rapidly and, once consumed, the landfill system becomes anaerobic. The aerobic phase lasts days to weeks in most cases. Aerobic biological reactions generate nearly 20 times more heat as anaerobic reactions. Therefore, minimizing air intrusion in landfills is important.

Once a landfill turns anaerobic, the first step in the overall biodegradation process is the conversion of some of the carbohydrates (cellulose, hemicellulose and starch), fats and proteins that are present in paper, yard waste and food waste to soluble compounds including sugars, amino acids, and fatty acids. This step is carried out by hydrolytic bacteria. In this second phase, referred to as the acid phase, the soluble substrates are degraded to short-chain volatile fatty acids (VFAs) such as propionate, butyrate and acetate, as well as alcohols, ammonia, CO2 and hydrogen (H2) by a class of microorganisms referred to as fermenters. The gas generated during fermentation is primarily CO2 and H2.

The accumulation of VFAs in the acid phase results in a low pH, high organic content leachate (typical of young or recently deposited waste). However, leachate and gas that are collected are often composite samples from a large section of a landfill that includes both fresh and decomposed waste. As such, leachate and gas composition will likely not reflect the characteristics of younger waste.

The next step in the conversion of MSW to CH4 and CO2 is carried out by a group referred to as the carboxylic acid-degrading bacteria or acetogens. These bacteria convert compounds such as propionate and butyrate to acetate, CO2, and H2. An example of this type of reaction is given below for butyrate conversion to acetate (CH3COO-):

The conversion of propionate and butyrate to acetate is only thermodynamically favorable for bacteria at low H2 concentrations. Thus, the anaerobic decomposition process only works if there is a mechanism for the removal of H2. In a landfill, the primary mechanism for H2 removal is its conversion into CH4. Methane producing microorganisms, called methanogens, carry out the last step in the conversion of MSW to methane. The most common substrates for methanogens are acetate (CH3COO-) and CO2 (equivalent to HCO3- in dissolved form) plus H2 as illustrated in the following reactions:

Simplified reactions for the conversion of MSW (represented as cellulose) under aerobic and anaerobic conditions are given in the following:

These reactions represent a simplification of the anaerobic biodegradation process that is illustrated in Figure 3.

In addition to methanogens, there is another class of microbes, sulfate-reducing bacteria, that will convert sulfate and H2 to H2S. This reaction is important in cases where the landfill has received a sulfate-containing waste such as sulfate-rich fly ash or construction and demolition waste that contains wallboard. 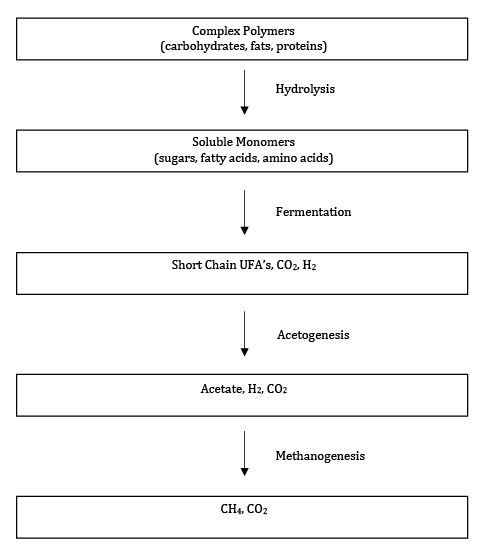 What Happens when the Biological System is Inhibited?

When the activity of the fermentative organisms exceeds that of the carboxylic acid degrading acetogens and the methanogens, there is an imbalance in the landfill system. Carboxylic acids and H2 accumulate, the pH decreases, and the BOD and COD increase. The low pH results in inhibition of the methane producers. While these changes reflect the microbiology of the system, they may not be directly reflected in the leachate. Leachate composition reflects a weighted average of conditions within the landfill, and also reflects processes that occur as leachate passes through MSW in different states of degradation. Thus, the leachate that is collected may not be representative of a specific area.

In an ETLF, the temperature is suspected to first reach a level at which the methane producers are inhibited. In this case, fermentation still occurs and decomposition intermediates (e.g., VFAs) accumulate. These intermediates account for the increasing leachate strength (BOD and COD) and decreasing pH in ETLFs. Similarly, H2 continues to be produced by fermentation, but consumption of H2 by methane producers is inhibited. As a result, H2 accumulates and is sometimes observed in the gas at ETLFs. As the temperature increases further, even biological fermentation reactions are inhibited. However, H2 may also be produced by non-biological or abiotic processes (see Part 3 of this series, forthcoming). As is the case for leachate, gas composition is influenced by whether the gas measurement is at a header pipe or at an individual gas well. In addition, H2 is readily degradable and may accumulate in one area of a landfill and be converted to CH4 before reaching a gas well.

There is no single upper temperature limit for methanogens as they have been observed in marine hydrothermal systems at 100 ºC (212 ºF). However, thermophilic methanogens in landfills normally have a temperature optimum of about 150 °F (65 °C), with ~ 77 °C (170 °F) as an upper limit for methane generation. Thus, the presence of H2 in landfill gas in an ETLF may be explained by inhibition of the methanogens that normally convert H2 to CH4 (Eqn. 3). Similarly, inhibition of the methanogens results in a drop in CH4 concentration in landfill gas, which is replaced by an increase in the CO2 fraction or the fraction of balance gas.

Carbon monoxide (CO) is frequently detected in the landfill gas at ETLFs and in many cases has been the basis of inferring that the landfill is “on fire.” This inference is made because CO is a byproduct of incomplete aerobic combustion. However, processes other than combustion produce CO, including anaerobic production of CO from mesophilic 25 - 40 °C (77 – 104 °F) and thermophilic (up to 80 °C or 176°F) microorganisms as well as by pyrolytic reactions as described in Part 3 of this series. The activity of CO-producing microorganisms in landfills is not well understood. While they may have a role in producing CO when methanogens are inhibited, such as in ELTFs, there are not sufficient data to provide guidance on indicator concentrations. Nonetheless, concluding that a landfill is “on fire” based on elevated temperatures and elevated CO concentrations can be erroneous.

The microbiology of landfills is complex and is impacted by many factors including the wastes that are buried, the moisture content, and the temperature. While anaerobic biological reactions result in some heat generation, anaerobic microbial processes are not the cause of the excessive heat accumulation measured at ETLFs. The amount of heat generated will be determined by the available degradable waste in the landfill, the rate at which it decomposes and the balance between heat generation and heat release through the gas, leachate, landfill boundaries and evaporation.

Anaerobic decomposition of MSW results in the production of H2, which is typically converted to CH4. If the CH4 producers are inhibited, then a microbial imbalance will develop and H2 will accumulate in the landfill gas. The accumulation of H2 suggests inhibition of the microbial processes by which it is consumed. One culprit for H2 accumulation is elevated temperatures. Similarly, CO may be produced as a result of the biological reactions described in this article and also by chemical reactions that will be described in Part 3 of this series. Consequently, ETLFs often exhibit elevated temperatures and elevated CO concentrations, even though a landfill fire (combustion) is not present.

Given the complexity of the biological reactions involved in anaerobic waste decomposition, and the fact that H2 and CO may result from both biological and thermal reactions, proposing standard operating procedures for ETLF conditions is difficult. As described above, both gas and leachate concentrations are influenced by sampling location relative to a section of a landfill that may be impacted. Landfills that are operating at 66 °C (150 °F) or higher may also exhibit stable methane generation. Thus, actions to be taken at an ETLF need to be supported by site-specific assessment of the landfill in consideration of trends in leachate and gas composition, sampling locations, and an understanding of all possible reactions.

This article has been updated. The description for Figure 3 was added. And some of the formulas were corrected to incorporate the proper symbols.
TAGS: Emissions
0 comments
Hide comments
Related
Sponsored Content