Are There Solutions to Landfill Slopes that Challenge Solar Projects? 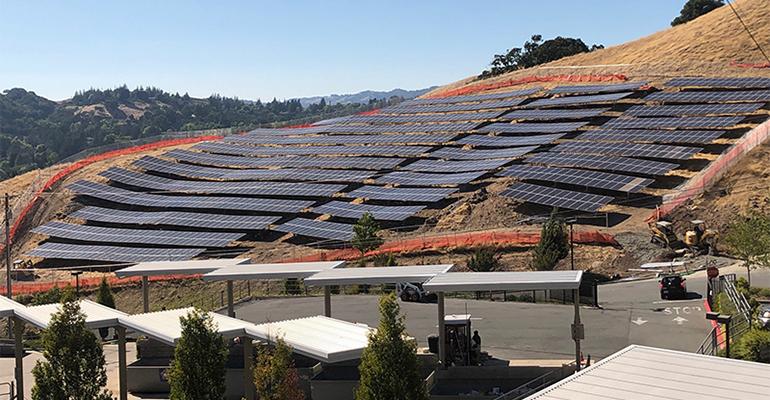 Most operators and developers avoid side slopes, but a few are trying to take them on, at least to some degree.

Landfill operators who are considering installing solar on their sites (usually post closure) want to maximize their space for the largest, most potentially profitable project, and side slopes tend to have the most space to accomplish this. But if those slopes are steep, installing solar on them is difficult to impossible, presenting barriers around engineering and economics.

Most operators and developers avoid side slopes, though a few are trying to take them on, at least to a degree. They have found ways around some problems in some scenarios, for instance challenges tied to supportive anchoring systems and heavy racking systems, among others.

Cincinnati-based RBI Solar rarely works on landfills with more than a 30 percent slope, where for every 10 feet of horizontal structure, there are 3 feet of vertical.

“There’s not much you can do with more than a 30 percent slope on a landfill, with one big reason being that the equipment required to install solar modules can’t exceed a certain pounds per square inch (psi) pressure requirement,” says Mike Freshwater, ground mount design manager for RBI.

The typical landfill has a maximum bearing capacity requirement of 7 to 10 psi that can’t be exceeded, while the psi exerted by tracked equipment can vary between 5 and 20 psi. Some equipment may not get enough traction, could get stuck and, in general, has limited ability to maneuver on steep slopes.

So, there needs to be a good anchor system to hold panels in place.

“But you are not going to use the same self-ballasted system on a steep slope; that technology is only good for up to about a 15 percent incline,” says Robert Fritz, project manager for PV Navigator in Brea, Calif. “Ballasts are needed to support heavy modules and heavier racking structures. So, you would need to come up with something different.”

Lighter-weight laminate modules (opposed to heavy crystalline panels) may work. This system was key for building on a slope at Hickory Ridge Landfill in Atlanta, along with other adjustments that were made.

The deployment of exposed geomembrane solar cap technology enabled Hickory Ridge to be transformed into one of the largest solar energy-generating facilities in Georgia, despite that the modules were installed on a greater than 15 percent slope. The system comprises 7,000 solar panels that generate 1 megawatt of renewable electricity.

This geomembrane serves as a cap, and the thin film solar panels were directly affixed to it, with the side slopes providing a viable, stable surface.

Standard driven post systems are an option when there is no ballasted landfill solution.

“We can install the foundations/driven posts on higher slopes because the machines that do this can operate on this terrain. They can maneuver enough to drive the posts in the ground,” says Kevin Ward, marketing manager for RBI Solar. 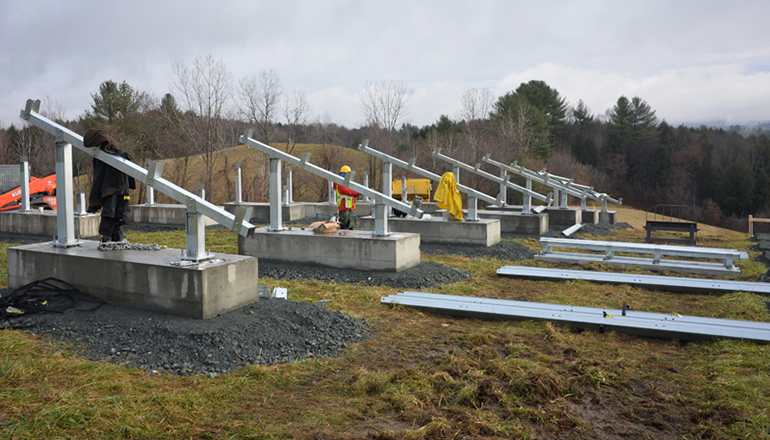 “But if a customer wanted to place gravel pads down to reduce the slope to 10 percent or less, we could place the ballast block on that. Typically, this does not happen because of cost,” says Ward.

Another fairly new method that may accommodate side slope installations is to connect modules to closure turf. Conversely, with a grass-covered landfill, panels are typically installed on the flat section of the site’s crown and require ballasted panels with racks. Multiple ballasting methods have been deployed to counter the system’s weight and hold steel and panels in place.

“We tend to use concrete that can be cast in place or precast. Casting onsite or precasting is the cheapest way, as you can save in costs to transport this heavy material. It’s also the easiest way, and these systems last a long time,” says Freshwater.

Still, both options present challenges. With cast-in-place ballasts, it’s hard to achieve the desired weight of the anchoring structure due to the slope. And precast is more expensive.

Research is necessary before deciding if and how to install on side slopes.

“Consult with your structural engineer, a geotech engineer and waste management engineer to learn how much slide will occur based on factors such as angle of slope and waste type in the landfill,” advises Duke Kuvaas, associate vice president and project manager at HDR.

Kuvaas also points out that the steeper the slope, the more concrete ballast will be needed. “You might need to put in so much concrete that it’s not economically feasible,” he says.

Operators need to consider access to a concrete plant or precast concrete plant, as hauling large quantities of concrete a distance greatly impacts installation costs. Also, it’s wise to know labor wages, as these projects require a lot of built-in adjustments to allow for installation on slopes, which takes time, advises Kuvaas.

Bottom line, says Ward, “Yes, it could increase solar capacity to install on slopes by maximizing panel numbers. And there certainly are some slope tolerances we can design to. But there is a threshold.”