Las Vegas is known for gambling, elaborate shows and of course a scorching, arid climate. Those fiery temperatures were just one of the unusual challenges that Republic Services Inc. and its partners faced in establishing a landfill-gas-to -energy (LFGTE) facility at its nearby Apex Landfill.

The waste and recycling company recently unveiled the tenth largest landfill gas to energy operation in the nation. The facility can generate up to 11 megawatts of electricity, enough to power more than 10,000 homes in southern Nevada. Moreover, it’s a green energy operation down to processing details  within a facility that has the potential to double or triple capacity as the landfill matures, says Frank DiCola, president and CEO of Energenic, Republic’s partner in the project, which designed, constructed and operates the conversion facility. Phoenix-based Republic and Energenic, with headquarters in Mays Landing, N.J., unveiled the facility north of Las Vegas to the public at an event May 17.

While the landfill is one of the largest in the United States, the dry Nevada climate made it a challenge to generate enough methane to make the plant viable, says Joe Burkel, Republic area president. “Back East it would produce a lot more gas.” But Republic and Energenic accomplished the task using existing LFGTE technology.

DiCola echoes that hotter temperatures mean less power generated. “A gas turbine sucks a lot of air.” One wrinkle Energenic added was a chiller to cool the gas entering its operation, thus maximizing power output for a range of temperatures.

Another innovation at the 2,200 acre-Apex facility is the ability to treat the post-combustion gas for nitrogen oxides (NOx) through the use of a selective catalytic reduction (SCR) device, DiCola says. The facility also uses gas turbines, which DiCola says are more “forgiving” during combustion than other landfills that use diesel engines that require being converted to gas.

The gas is pre-treated as well, removing siloxanes and volatile organic compounds (VOCs). DiCola says Energenic customized the siloxane treatment system for this plant with a gel mixture that was tested to know exactly how to treat the gas. “Gas is not static, so we’ll continue to test.”

The facility exceeds government standards. “From a tailpipe emission standpoint it’s very clean,” DiCola says. This is the eighth U.S. biogas project for Energenic, and most of those have involved landfills. “This is one of our more advanced projects.” Burkel adds that the emission controls at Apex are among the top in the country.

In addition, the facility takes in a different combination of waste streams and therefore must surmount different contaminants than other Energenic projects.

Perhaps unsurprisingly, sun-baked Nevada’s renewable energy projects often are solar-based, DiCola says, which has the drawback of being an intermittent power source. “This is a 24-7 operation.”

Ed Graham, chairman of sister company South Jersey Industries in Folsom, N.J., says another value to the Apex operation is as a backup source to solar projects. 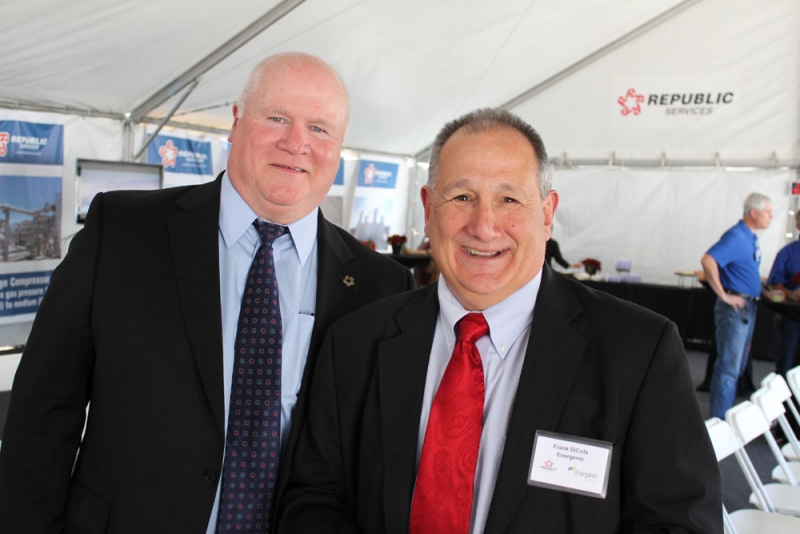 That diversity is valuable to the state, which has set a requirement of using 25 percent renewable energy by 2025, says Mary Simmons, vice president of external strategy for Las Vegas-based NV Energy. The power supplier for local residents, NV Energy has a 20-year agreement to draw power from the Republic operation. Last year 15 percent of the state’s power came from renewable resources. “Natural gas has a big part in it,” he says.

The permitting process also was unique for Energenic, DiCola says. The state has recently adopted stricter codes that were modeled after neighboring California. But Republic and Energenic worked with officials from Clark County and elsewhere to complete the process in less than eight months. “The philosophy was not to fight but sit down, find out what the requirements are and come up with a technology that meets their needs,” he says.

As described in a Republic news release, the process works like this: Republic’s biodesulfurization plant captures the landfill’s methane gas through a blower vacuum system. It pushes the gas through a cooler and then circulates it to a contactor tower. There, a biological reaction occurs between solution and gas. Bioreactor tanks absorb hydrogen sulfide (H2S) and extract elemental sulfur. The gas moves through a centrifuge that rotates the gas at high speeds, removing the sulfur from the solution. A booster blower then delivers the gas to Energenic for further processing.

About a mile away Energenic receives the gas through a channel of underground piping. The gas enters the chiller. It passes through a first compressor, which increases the pressure from low (4 psi) to medium (80 psi). A conditioning system removes silicon-based organic compounds. It then moves through a second compressor in which the pressure is raised to high (225 psi). The combustion turbine and generator combust the methane, creating exhaust gas that drives the turbine, which in turn drives the generator and ultimately delivers power to the NV Energy grid.

Which Green to Choose

Republic gains revenue that it wouldn’t have if it just flared off the gas, but Burkel says the company’s motivation wasn’t financial. “It’s just the right thing from a sustainability point of view, lowering emissions. It’s extremely clean, because we’re capturing the gas, saving on both natural resources and greenhouse gases.”

That attitude, DiCola says, reflects Republic as a business partner with a solid environmental emphasis. 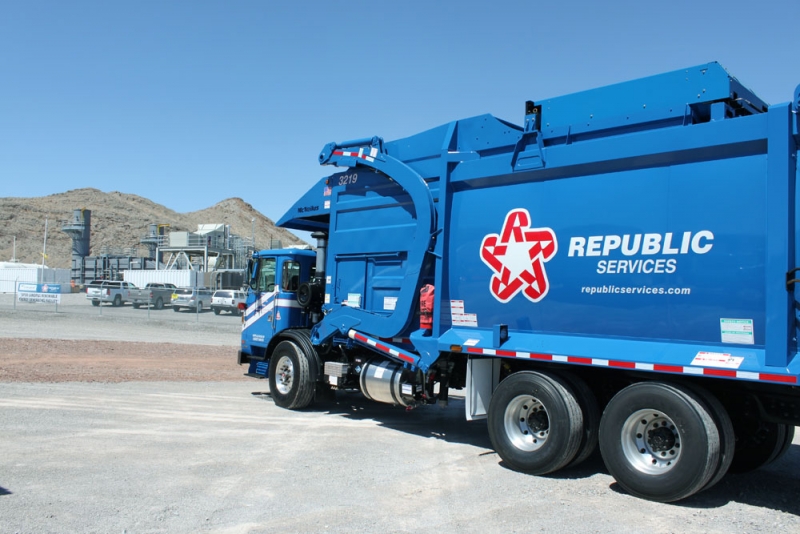 The Apex landfill is older than the LFGTE project, but still fairly young. It was built in 1993. The gas conversion project has been planned for four years and was under construction for one year. The facility has more than 250 years of life left, says Rob Tidwell, environmental manager for Republic.

The project is just getting started. Currently only one of the two turbines is operating, generating about 5 megawatts of power, says Bob Coyle, Republic vice president for government affairs. It’s been generating electricity since the end of last year.

Republic and Energenic did extensive testing to get this far, DiCola says. “To get everything to work right, it takes time. We’re looking forward to this landfill producing a lot more gas so we can produce a lot more energy.“

The new power source will come in handy for a ravenous energy region like Las Vegas. On the day of the unveiling, temperatures topped 100. “We appreciate all the energy we can get here in southern Nevada,” Simmons says.

Lots of technologies for landfill gas to energy are currently being explored, DiCola says, such as direct gasification. But overall he sees the landfill gas-to-energy concept “as a significant greenhouse gas eliminator” as well as a strong renewable energy source.

“As I like to say, today’s trash is tomorrow’s gas.”