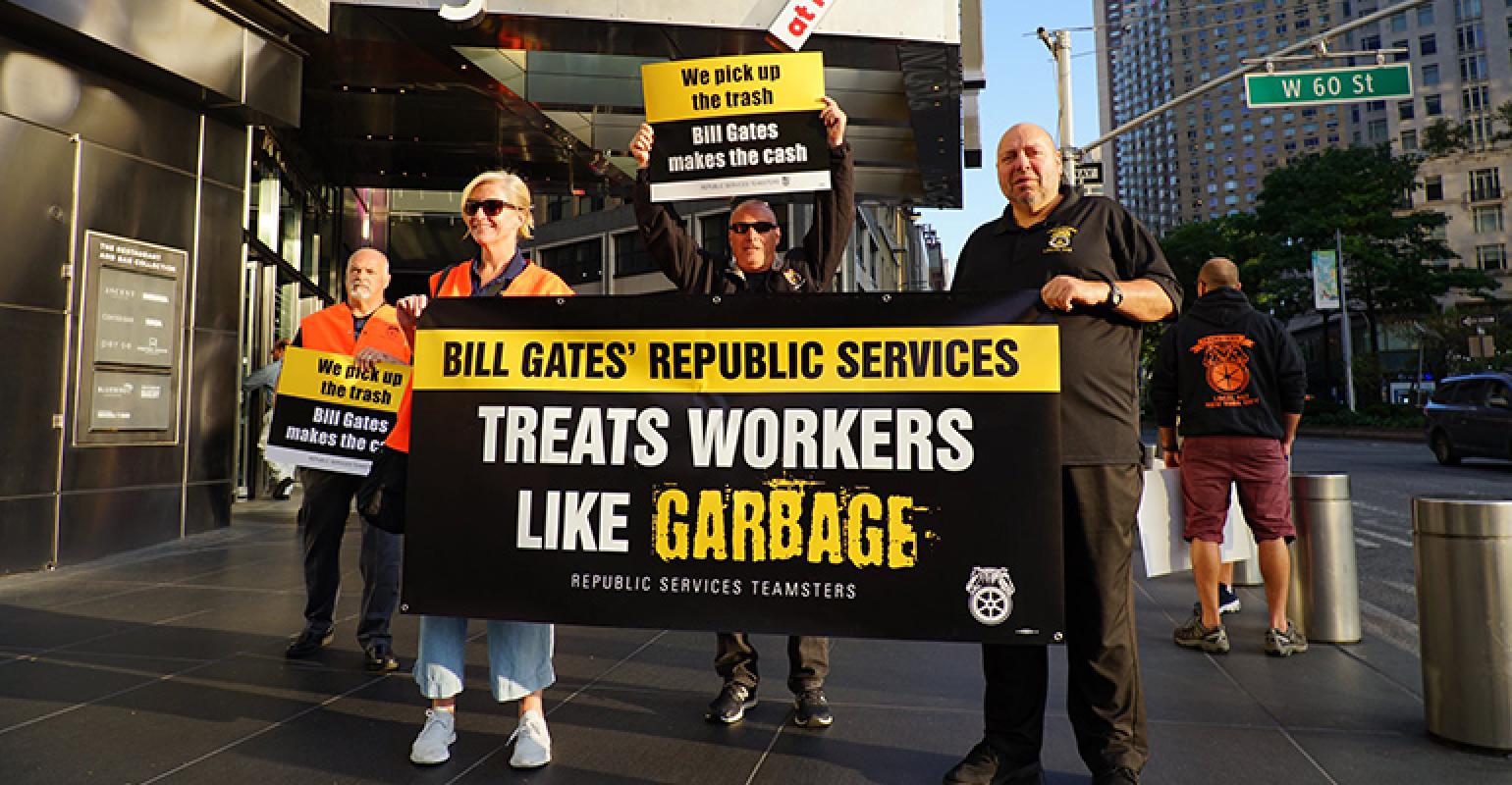 Striking Boston-area Republic Services sanitation workers and their supporters in New York protested at the Gates Foundation's annual Goalkeepers event on September 25 to call on Bill Gates, Republic’s largest shareholder, to use his influence for good and improve jobs. And as the strike on the East Coast has garnered momentum, union workers at an Anaheim, Calif., facility run by Republic Services have also voted to call a strike.

The Boston-area workers first walked off the job in late August after Republic allegedly refused to provide them with what they refer to as a “livable wage.” Since then, across the country the company’s workers have been fighting—and in some cases striking—to demand safer jobs, livable wages and respect on the job. The workers are members of the International Brotherhood of Teamsters.

Republic Services is the second-largest trash collection and disposal company in the U.S. and posted $10 billion in revenues in 2018. As Republic’s principal shareholder, Gates receives more than $100 million in stock dividends annually.

.@RepublicService @Teamsters from Boston are on strike and in NYC today calling on @BillGates, Republic’s largest shareholder, to stop treating workers like trash#ItsNotWhatWeWantItsWhatWeDeserve #Goalkeepers19 #1u pic.twitter.com/moIXlvtIJo

“Yet, while Gates claims to care about inequality, workers say they’re protesting this year’s Goalkeepers event—focused on ‘the challenge of fighting global inequality to ensure no one is left behind’—because they believe Gates’s work to end global inequality must begin with improving conditions at the company that pays him millions in dividends,” according to the Teamsters.

The strikes began earlier this year with a trash collector strike in the Boston area and has since spread across the country either as workers walk off the job or honor the picket lines. Recent calculations show that workers in 10 cities with a combined population of more than 1 million residents are currently in negotiations with Republic Services, according to the Teamsters.

And as the strike on the East Coast is gaining momentum, union workers at an Anaheim, Calif., facility run by Republic Services “voted overwhelmingly” on September 21 to authorize its leadership to call a strike, the San Gabriel Valley Tribune reports.

The Anaheim workers’ contract expires September 30, and if workers strike, it likely would shut down work at Republic Services’ materials recovery facility on North Blue Gum Street in Anaheim and affect trash pickup at thousands of businesses and residences in Orange and Los Angeles counties, according to the report.

In addition, a Teamsters local in San Jose, Calif., also voted on September 21 to authorize a strike.

Hundreds of sanitation workers employed by Republic Services in both Northern and Southern California have voted overwhelmingly to authorize a strike against the company. These men and women are members of Teamsters Local 396 based in Covina, Calif., and Teamsters Local 350 based in Daly City, Calif. Both unions are affiliated to the International Brotherhood of Teamsters, which represents more than 7,000 Republic Services workers across the U.S.

“Teamsters working at Republic Services across the state of California are sending a strong message that they are ready to do whatever it takes to secure a fair contract,” said Ron Herrera, secretary-treasurer of Teamsters Local 396 and director of the Teamsters Solid Waste and Recycling Division, in a statement. “Republic Services needs to take negotiations seriously to ensure that these workers who work hard to keep our cities clean and protect our environment get a fair share of the profits that they generate.”

Republic Services respects its employees and their right to union representation. Republic expects any union to provide accurate information when making public statements. The Teamsters have not done so here.

Teamsters Local 25 has orchestrated a strike in Marshfield, Massachusetts, involving two dozen drivers. In collective bargaining for a first contract, the union demanded that Republic enroll those employees in the union’s non-competitive health and retirement plans, including completely free health care coverage. When Republic declined and offered industry-standard third-party health and retirement plans, the union took Marshfield’s employees out on an extended strike and orchestrated a few one-day sympathy protests at a small number of other locations. As one of its disruptive strike tactics, the union now suggests that Republic does not provide its employees a living wage and pays far below market norms. This is simply not true. To the contrary, Republic takes pride in providing its Marshfield employees with outstanding compensation and benefit packages. Without any union involvement, Marshfield drivers already receive from Republic a highly competitive wage and benefit package, averaging nearly $100,000 per driver last year. In fact, the employees at the upper end of the wage scale earn over $100,000.00 in wages alone. And that does not include the significant value of a benefits package that includes quality medical, dental, vision, AD&D and disability insurance, a company-matched 401(k) retirement plan and generous paid time off. So when Local 25, or those it uses to provide soundbite quotes, says that Republic does not pay Marshfield employees a living wage, they are just wrong; on purpose. In an age when many employers do not provide a wage and benefit package even close to what Marshfield employees receive, Republic is proud of the economic opportunity and security it provides to its Marshfield employees’ families. Unfortunately, when Republic did not agree to the Teamsters’ unrealistic bargaining demands, the union not only called a strike, but it also engaged in a number of very troubling pressure tactics in the Marshfield community. Republic will not give in to the Teamsters’ unlawful tactics, which have included violence, stalking, threats and racial/gender slurs, as well as interference with trash collection. In fact, Republic filed an injunction request in state court to ensure the safety of our employees, customers and the general public in the Marshfield area. Republic hopes that Local 25 will stop the disruption to the Marshfield community and return to the bargaining table with realistic, competitive proposals. Republic is ready to do so.

Waste360 will continue to update this article as more information becomes available.

The original article was updated the evening of September 25 with a statement from Republic Services.
0 comments
Hide comments
Related
Sponsored Content