Teamsters on Strike at Republic Extend Picket Lines to Seattle 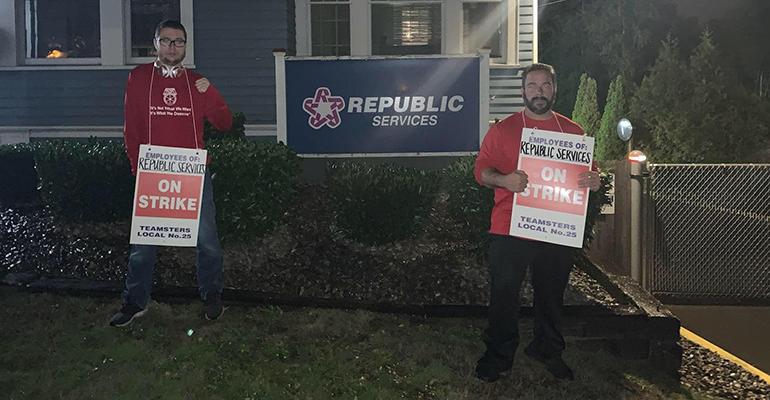 Sanitation workers on strike at Republic Services in Massachusetts have extended their picket lines to Seattle.

Sanitation workers on strike at Republic Services in Marshfield, Mass., extended their picket line to Seattle on October 3. Approximately 250 Republic Services/Allied Waste workers throughout the Puget Sound area—members of Teamsters Local 38, Local 117, Local 174 and Local 763—exercised their right to honor the picket line.

The striking workers, members of Teamsters Local 25 in Boston, began their strike on August 29 after claiming Republic refused to agree to a contract “with a livable wage and affordable healthcare.”

“Republic Services set a record last year with almost $3 billion in profits,” said striking Republic employee Bernie Egan-Mullen in a statement. “But instead of providing safe working conditions and industry-standard healthcare and retirement plans, the company is using its record profits to pay out huge salaries to its executives and huge dividends to its shareholders.” 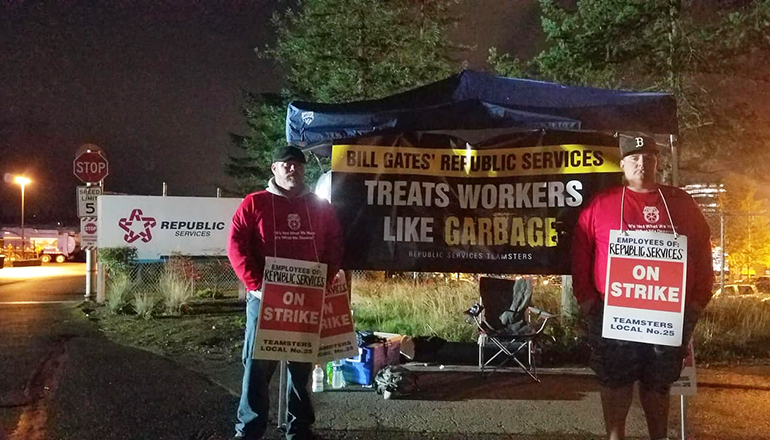 “That’s why we’re here in Seattle,” said Egan-Mullen. “Bill Gates gets over $100 million in stock dividends alone from Republic each year, yet meanwhile we are on the picket line for a living wage.”

“Sanitation work is the fifth-most dangerous job in America. Sanitation workers are two times as likely to die on the job as police officers and nearly seven times more likely to die on the job than firefighters,” said Sean O’Brien, president of Teamsters Local 25 and vice president of Teamsters International, in a statement. “This company has forced quite a few strikes in cities across America over the past few years, when it has violated federal labor laws and has refused to address conditions of inequality and unsafe conditions.”

Regarding the most recent strike, Republic Services said: "Today’s temporary work stoppage at our Bellevue, Kent and Lynnwood, Wash., locations is related to a labor issue in Massachusetts that has nothing to do with any Washington employees. Republic Services is servicing critical customers in the affected areas today and will pick up any missed collections as soon as possible."

"We respect our employees and their right to union representation, and we expect similar fairness in return," added Republic Services. "Unfortunately, a small faction within the Teamsters organization is trying to use customer disruptions here as a tool to pressure a Republic subsidiary on the other side of the country. We will take the steps necessary to minimize inconvenience to our local customers caused by the Teamsters’ pressure tactics, and we will continue to offer our employees a highly competitive wage and benefit package with excellent wages and quality medical, dental, vision, AD&D and disability insurance, a company-matched 401(k) retirement plan and generous paid time off."

The Teamsters represent more than 7,000 Republic Services workers across the country. Recently, hundreds of Republic sanitation workers in Northern and Southern California represented by Teamsters Local 350 and 396 voted overwhelmingly to authorize a strike against the company.

According to the Teamsters, recent calculations show that workers in 10 cities with a combined population of more than 1 million residents are currently in contract negotiations with Republic Services.