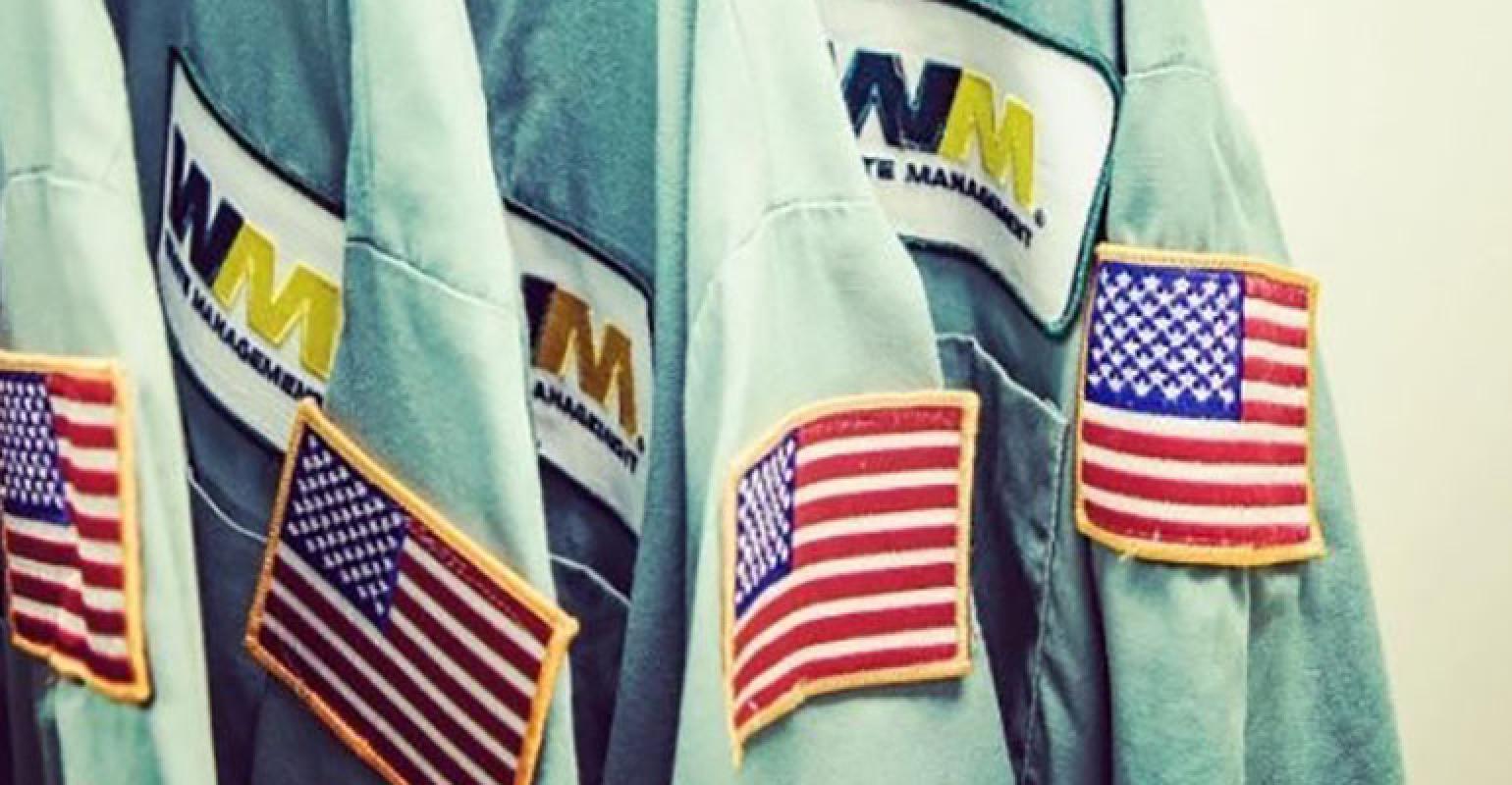 Both the company and the military offer challenging careers that place a high importance on safety, service and values.

Military veterans are valuable—they possess skillsets like dedication and leadership, and they begin every workday with a mission. These are traits that they take with them once they leave the military, and traits that they apply throughout their careers in the workforce.

Many of these hardworking veterans have found careers at Houston-based Waste Management, one of the leading companies in the waste and recycling industry. At Waste Management, one in 14 employees is former military, and at least one veteran is hired every day of the year, according to the company’s website.

Waste Management helps veterans make the transition to the civilian world, which isn’t always easy, and helps match them with careers that best suit their interests and experience.

“When I transitioned to the civilian world, I needed to find a company that had similar values to that of the United States Army,” says Michele Zambrano, area manager/centralized dispatch of Waste Management and former Army captain and engineer officer. “During my search, I came across a list of the Top Military Employers. There was only one employer that caught my attention, and it was Waste Management. Waste Management is similar to the military in that both offer challenging careers that place a high importance on safety, service and values.”

“It was challenging at first,” she adds. “The military offered structure, and I found civilian life to be less structured than what I was used to. When I joined Waste Management, I found things to be similar to the military in a lot of ways. In the military, there are SOPs [standard operations procedures], but here, we have our own set of policies and procedures to help guide our decisions. In operations, we have a standardized process to route our trucks and get them off the yard so our teams can safely and efficiently service our customers.” 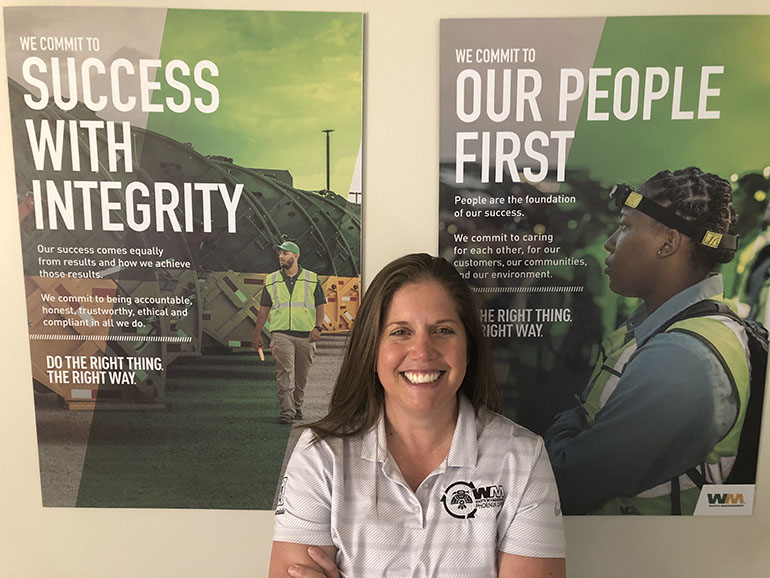 Zambrano has been with Waste Management for nearly nine years. Before coming on board, she joined the U.S. Army Reserve in 1998 and enlisted as a 92A, automated logistics specialist. After graduating from college, she commissioned as an engineer officer and was stationed at Fort Benning, Ga., until August 2006.

In the Army, Zambrano learned the importance of team work and communication. Good communication is key, she says, and in order to effectively lead a team, you have to communicate in a way your team hears you.

“The Waste Management way and the Army values mirror each other in a lot of ways,” states Zambrano. “Without our people, the mission won’t be accomplished. Today, that mission is to work as a team to provide world-class customer service. While there is always a job to be done, if you take care of and trust your team and co-workers, you’ll always be successful.”

At Waste Management, recruiting veterans to join the company has been a longtime priority. According to Wes Reel, organizational and talent development program manager for Waste Management, Golf War I veteran, naval officer and former helicopter pilot, the company’s early veteran hires were so successful that Waste Management eventually formalized its veteran recruitment process by establishing a strategic program centered on three pillars: recruitment, retention and career advancement. Companies that are interested in following suit can take the below actions recommended by Waste Management:

There also are steps that veterans can take to better prepare themselves for the transition from the military to the workforce.

“Veterans must first acknowledge and accept the change they are about to encounter. They must get excited about their new chapter in life and be motivated to generate ideas and a plan for their transition to the civilian sector,” says Reel.

“Veterans should attend the transition assistance training offered by the military so that they understand the basics of a career transition,” he adds. “Take advantage of job fairs, networking, internet resources and local resources, such as newspapers (print or digital), chambers of commerce or Department of Labor career one-stop centers, to discover the opportunities in the town where you want to work. When you do land a position with a civilian employer, remember the fundamentals: show up on time, if not early; prepare and train; be good to the people around you as they are your new team; put in the time to accomplish your new mission; be willing to give ideas and receive ideas; and don’t forget that the fundamentals count on your road to success.”

Reel has been with Waste Management for nine years. Prior to joining the company, he attended college and Navy flight training. He then joined Helicopter Anti-Submarine Squadron Seven in Jacksonville, Fla., where the primary mission was anti-submarine warfare (ASW), and worked to provide inner-zone defense for the battlegroup aircraft carrier. He also participated in other missions, such as search and rescue and logistical support.

After his first deployment to the Mediterranean, the squadron had a respite and then deployed to the Red Sea for Operation Desert Shield/Storm in early 1990. By that time, the squadron had lost its ASW mission and flew more of a general support role for the aircraft carrier. The Cold War had just ended, and there was no submarine threat from the Soviet Union or anyone for that matter, according to Reel. Instead, the squadron had opportunities to fly maritime interdiction and partake in other interesting missions that allowed it to work with Naval Special Warfare, Marines and Explosive Ordnance Disposal teams.

He then went on to spend one year at Naval Air Station Jacksonville, flying both helicopters and airplanes. He eventually became the aide to the Navy’s senior helicopter admiral. After two years in that role, Reel decided to make the break and went home to Atlanta to join his wife, raise a family and start a new career. He worked at an agency recruiting firm for 15 years and then joined Waste Management in 2010 to help build its military recruiting program.

Over the past nine years, Reel has grown to appreciate what the company’s employees do to keep the country clean and safe. In addition, he’s been given the opportunity to follow different passions, define his own path and put the skills he learned in the military to work at Waste Management.

“I view the skills [I’ve learned] as tangible and intangible,” says Reel. “I learned tangible skills like flying airplanes and helicopters. Waste Management hires construction, transportation and maintenance men and women from the military for such tangible skills because they easily translate to the job requirement … So, from a tangible skill standpoint, it is an easy transition for most veterans, and employers respect the experience veterans bring. However, to me, the military is the ultimate ‘leadership lab,’ and as such, intangible skills are also emphasized on a daily basis. I believe it is these intangibles that are the true X factor. Intangibles include teamwork, initiative, decision-making, encouragement and work ethic. Bringing both tangible and intangible skillsets make an employee well-rounded and unique in their contributions and value to the company. I believe that veterans bring both qualities to an employer.”

Another veteran putting his skills to work at Waste Management is Domenick DiPaolo, district manager of Waste Management Lake Charles, La., and former Marine sergeant. He spent six years in the Marine Corps Reserve, which included one tour in Iraq, and helped manage the ordering, tracking and transportation of supplies and goods for his battalion. 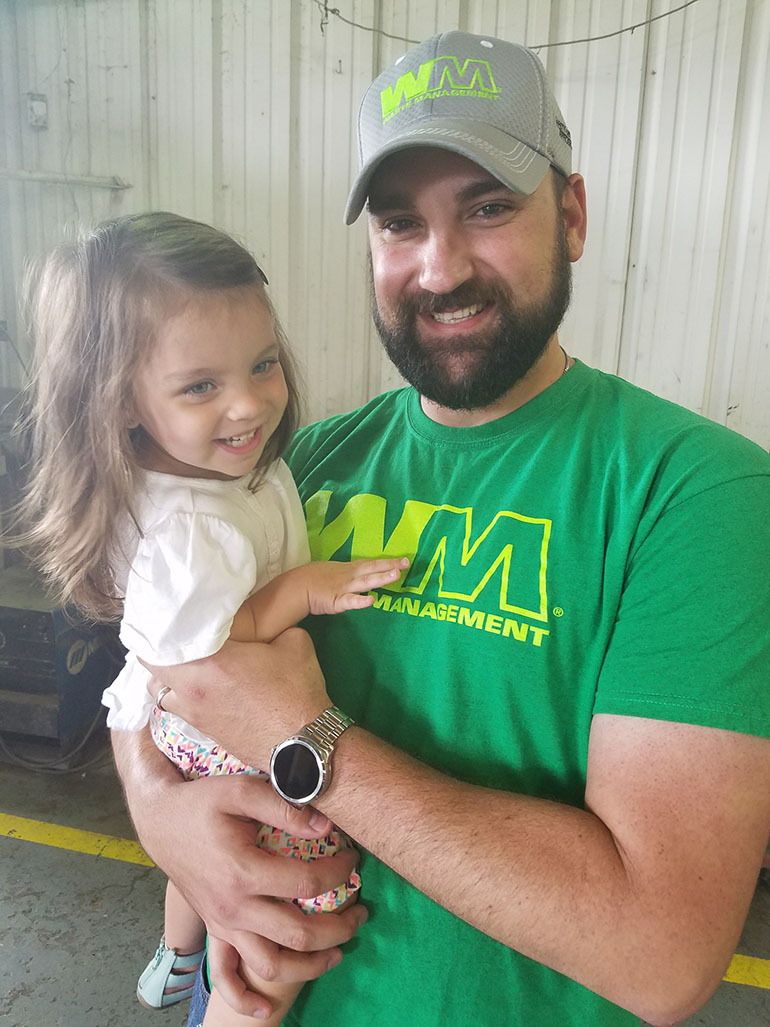 After exiting the military, he conducted contract work for a utility company and later learned that his role would not be renewed. He sought out a new opportunity and came across the operations management trainee position at Waste Management, which he viewed as the perfect fit.

“My transition into the workforce may have come easier than others,” says DiPaolo. “My father served 23 years in the Navy. He gave me a great example to follow and was always there for guidance, especially as I began to develop as a frontline leader with Waste Management.”

“The development of critical thinking, especially in high stress situations, was extremely beneficial to me when I began my career in operations with Waste Management,” he adds. “Situations can arise during the workday where seemingly nothing is going to plan, but it’s important to remain level-headed, collect information and make a decision on how to move forward. I think employees also appreciate it if you can provide a clear direction when the day gets knocked off course.”

Over the years, Waste Management has helped transform these veterans and others into leaders in the waste and recycling space. And as these veterans continue their career paths, they've provided the below advice for fellow veterans as they begin to make their own transition into the workforce: