Allen sat down with Waste360 to discuss what drew him to waste management and what he hopes to achieve with this three companies.

San Diego native Josh Allen is the CEO of Global Disposal Reduction Services, Inc., which he founded in 2008. 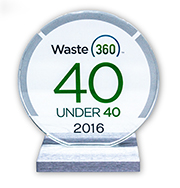 Allen was recently named a Waste 360 40 Under 40 award recipient. Although waste management wasn't his original career path, he is blazing a new trail in the industry.

"When Josh started Global Disposal, he had a vision of a successful business that could help communities have economic incentives and convenient solutions and be better stewards of the earth. His drive and dedication to the mission has inspired so many around him to stay committed to their dreams and build a better future," says Briana Wyatt, director of marketing and business development at Global Disposal.

Allen sat down with Waste360 to discuss what drew him to waste management and what he hopes to achieve with this three companies.

Waste360: What brought you to the waste management industry?

That's when I first started, and during the 2008-2009 economic downturn everyone was looking to save money. That's how we positioned our business at first: to help people save money by recycling. We were really good at it. We saved people thousands of dollars, and they loved it.

Then, what really got us going was when I attended WasteExpo. I went to classes every day, and I was amazed. It just set a fire underneath me. I started reading and learning everything I could about the industry.

Waste360: What was a turning point in your career?

Josh Allen: In 2010, we had a huge homeowners' association come to us in San Diego. They had about 3,000 homes, and they all were paying individually to the haulers. [People were paying various different rates.] All they were getting was regular trash and recycling services, and they felt like they should be getting a better deal. They made us the primary vendor, and I took the services out to bid as a commercial service for 3,000 homes.

We started doing that for other homeowners' associations. And, we started focusing on the universal waste—the bulbs and batteries—and e-waste curbside, which really increased diversion. We were using another company to do that, and we ended up buying that company [Universal Waste Disposal]. Now, we have bulbs and batteries accounts for businesses and homeowners' associations all over southern California.

Waste360: What is a gap that you thought you could fill with your business?

Josh Allen: I felt like we could bring more extensive programs to residential communities.

We think we have a lot to offer on the city side as well. A lot of cities [in California] are franchised, and I think that we could benefit their systems and bring better services to entire municipalities.

Waste360: What are the economic incentives that your company provides?

Josh Allen: Early on, we learned that people want to recycle but if it costs them one dollar most people will not do it. If they save one dollar, they're all about it. That’s where we add value. When we give the customer the price, we have all of the recycling programs that they need built in. We don't give them an option for not recycling. We know that's not what they want, and we're already saving them money.

Waste360: What advice would you give to someone who is new to industry?

Josh Allen: I get calls all the time from young people who are wondering what direction they should go in, and my advice lately has been to focus on the organic side, especially here in California. That’s where the industry is growing. Right now, we're probably doing 5 percent of the organics diversion that we're going to be doing here in California over the next five or 10 years. We're spending time and money trying to develop that side of our company and become more educated on everything organic.

Waste360: You see this as an opportunity for your company as well?

Josh Allen: Absolutely. We started learning about this years ago because we saw it coming down the pipeline. I took eight people with me to WasteExpo this year, and the primary focus was to see everything that was in the organics market.

Waste360: Is there anything I didn't ask that you would like people to know about your company?

Josh Allen: We have an awesome company. I wish you could come into the office and see how excited our staff is over trash.

Waste 360: Why do you think they're so excited?

Josh Allen: Because it's an awesome industry. I think everyone wants to go to work and spend their day doing something that makes a difference. They want to be able to support their families and benefit customers and the environment.

Waste is an industry where you can really make an impact and feel good about it. It gives you an opportunity to be creative. At the end of the day, you feel like you made a difference.