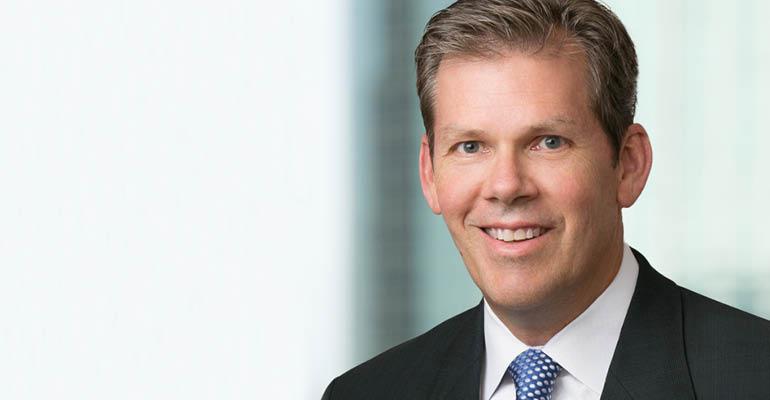 Fish, 54, has held several roles of increasing responsibility since he joined Waste Management in 2001.

Fish steps in at a time when Waste Management has posted a string of strong quarterly results. Most recently, the company announced financial results for its third quarter, which included a 5.6 percent increase in revenue. (It will announce its fourth quarter and full-year 2016 financial results next month.)

In mid-December, Waste Management also released its 2016 Sustainability Report, “Leading Change.” In a change from past years, Waste Management shifted the report’s focus to look at life cycle analysis and greenhouse gas emissions reductions. It is de-emphasizing weight-based recycling goals. Fish wrote about these changes in the report’s introduction. (For more on that report, check Leone Young’s most recent Business Insights column.)

In stepping in to lead a company that’s had momentum, Fish doesn’t see his role as that of a change agent. Instead, it’s to be a steward in building on the momentum Steiner built during his tenure.

But Fish does see some opportunities to improve operations as well, particularly when it comes to technology.

Fish, 54, has held several roles of increasing responsibility since he joined Waste Management in 2001. He took on the role of president in July 2016. Previously, he had served as CFO starting in 2012.

Prior to that, he had served as senior vice president for the company’s eastern group, area vice president for Pennsylvania and West Virginia, market area general manager for Massachusetts and Rhode Island, vice president of price management and director of financial planning and analysis. Fish earned a Bachelor of Science in accounting from Arizona State University and an MBA in finance from the University of Chicago. He is also a Certified Public Accountant.

Fish also had stints with KPMG and American West in Phoenix and with TWA in St. Louis. With Waste Management, he’s lived and worked in Boston and Pittsburgh and served two stints in Houston, which is just a few hours from Austin, the town where Fish was raised.

In late December, Fish talked with Waste360 about what it’s been like stepping into the CEO role at the nation’s largest solid waste company and about the firm's next steps.

Waste360: How did the succession plan process play out at the company?

Jim Fish: It played out as we expected. The board had talked to me 18 months ago and said, “We’re going through a succession planning process.” It’s one of their critical responsibilities. They had been thinking about it for some time.

It was time to move forward. It wasn’t hugely surprising internally…. I was named president in July, which telegraphed what was going to happen next.

Overall, 85 percent of CEO successors come from inside companies. You know what you get with that person. I’ve had lot of exposure to the board.

Waste360: Does this speak how the board thinks the company has performed in recent years?

Jim Fish: The company has been doing well for the last five or six years and really well since about 1999, which was when it had accounting problems. Since those days it’s turned around considerably.

David put in place price discipline, emphasized safety and took on other initiatives. The stock price doubling in the last four years didn’t hurt either.

I think it’s continuing down the same path, but recognizing how important the Waste Management culture is to our success and making sure when I think about the constituents I am serving—shareholders, customers, municipalities and our own employees—that I not lose sight of the fact that our employees are critical to our success and critical to making those other constituents happy.

Waste360: What do you see your tasks being stepping into the CEO role?

Jim Fish: I wouldn’t want to come in and change the entire world here because we’ve been doing well. It’s about continuing down the same path we’ve been on.

But in addition to those things, technology is an area that we haven’t levered as well as we could have. By that I mean not just technology in terms of hardware, but data. We have a tremendous amount of data we could use to make better decisions on pricing, maintenance of equipment, routing and other areas.

Waste360: How do you see the firm leveraging data to improve operations?

Jim Fish: If you think about our routing and logistics business, we have 4,800 commercial routes per day. They are constantly changing. We’ve got to be able to use our data to most efficiently route our vehicles to result in the best possible cost to us and best possible customer focus as well.

You can imagine there are requirements (i.e., you can’t go into school zones at certain times), but we can use technology and data to get the most optimal routing from a cost and customer standpoint. We’re not all the way there yet.

We have an IT governance committee tasked with looking at the various (options) and it’s also about investing in technology for the future.

When it comes to disposal, it’s a little different. It’s not a laptop or iPad in that case. It’s wrestling with what are the alternatives down the road as landfills get to the end of their lives. Is there a green technology that can be commercializable in terms of volume and remain economically viable. So far we haven’t found it, but we will continue to look. If I had to guess, we’ll see something in the next two decades in terms of the next generation of disposal facilities.

Jim Fish: Deffenbaugh and RCI were both strategic in terms of putting us in geographies we weren’t previously. We had a small presence in Montreal and none in Kansas City prior to those deals.

We will continue to do deals. Currently, $100 million to $200 million is our annual run rate on tuck-ins. We’ll continue to look at reasonably priced mid-size acquisitions.

Waste360: As you pointed out, David Steiner has been very vocal about the issues facing recycling and the company has been proactive in trying to address that. What’s next on that front?

Jim Fish: The reason it’s been a focus is commodity prices have seen a four-year downtick. There used to be ebb and flow to it like everything else. We’ve seen some a ride back up recently, but to do this day we’re still not back to the historical averages. Our average is $102 per ton. Today we’re at about $97.… Four years ago, were at $155 per ton as an average commodity price. And the delta between that $155 per ton and where we were in January 2016 represented $250 million in EBITDA. So it’s a big change. That’s why it attracted so much attention. It speaks to the fact that the rest of the business can still have a good year with a headwind like that.

Our objective is that we want to be in this business. But we can’t be in the business if we’re going to continue to bear all the risk of commodity price fluctuation.

Waste360: In looking at recent quarters, there has been an uptick in both volume and core price. What’s driving that?

Jim Fish: Maybe the single biggest contributor to volume is that we’ve reduced the churn of our customer base by focusing on customer experience and a technology solution that we can bring to the customer. It differentiates us from our competitors. We’re really spending a lot of time on considering what customers are looking at from us. That will continue to lower the churn number.

Consider we were at an 11.5 percent churn rate about two years ago. For the third quarter of 2016, it was down below 8.5 percent.

Now that we’re driving the churn rate lower, it’s a major contributor to our volume growth.

In terms of pricing, David’s legacy in the industry is that he changed pricing for the long term. He was the guy that stuck to his pricing principles. There’s no price elasticity in trash. We’re putting some technology to make sure we’re smart in our pricing, but we will continue to be disciplined in pricing at the company.

Waste360: Outside executing in the existing business, where do you see growth opportunities?

In the U.S., we have a big Millennial generation. That will benefit the industry in terms of construction of homes and consumer goods. Meanwhile, baby boomers will require a lot of healthcare services. We have a healthcare business. It is a good business for us.

Waste360: Have there been any surprises for you since taking over as CEO?

Jim Fish:  There are a lot of folks who are interested in talking to me. That’s a bit of a surprise. It is more time consuming.… I had a call from a customer who was concerned because one day we came at 6 PM when our pickups are normally at 3 PM. They were concerned we were changing time of pickup.

Overall, I’m getting a lot of customer calls and emplo9yee calls that I didn’t used to get. So 80 percent of what you do is deal with people issues…. That’s been a little bit of a change. But the rest of what I’m doing was practiced for in my role as president.

Waste360: What do you do when you’re not on the clock?

Jim Fish: I’m a sports nut. I’m a Cowboys fan. But I don’t watch the games a lot of the time. It’s too stressful. I like to DVR the games and watch later if it’s a good game. I also like to read. And my wife and I do philanthropy. We volunteer at food banks. Our two girls also help out with that. I’ve always felt giving back is important.