Glass containers are made from sand, limestone, soda ash, cullet (crushed bottles), and various additives, including those used to color brown, green or blue bottles.

More than half of the bottles produced in the United States are brown. Clear (also known as flint) bottles are the next largest in production. Most of the remainder are green with a small amount of blue or other colors.

In 2013, approximately 27.5 billion glass containers were made in the United States. Almost 80 percent were beverage containers, three quarters of which were beer bottles. The rest were bottles and jars for food products. An estimated 7 billion bottles were

imported. Most of these are green or brown wine and beer bottles.

Glass container use in the United States peaked in the 1980’s. Tonnage has declined by 4.7 million tons since 1980 as lighter weight aluminum and plastic containers have replaced glass bottles.

Other glass products such as window glass, fiberglass, and glassware use different manufacturing processes and different additives than container glass. This Profile does not cover non-container glass. 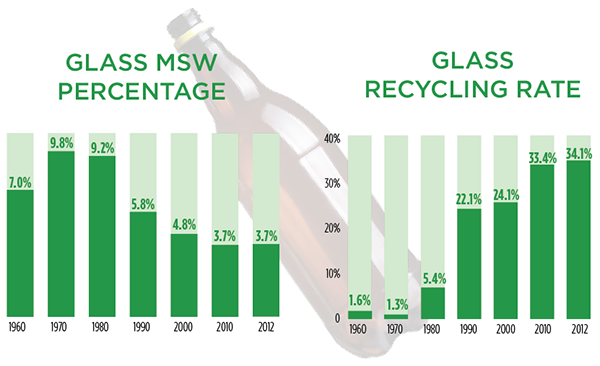