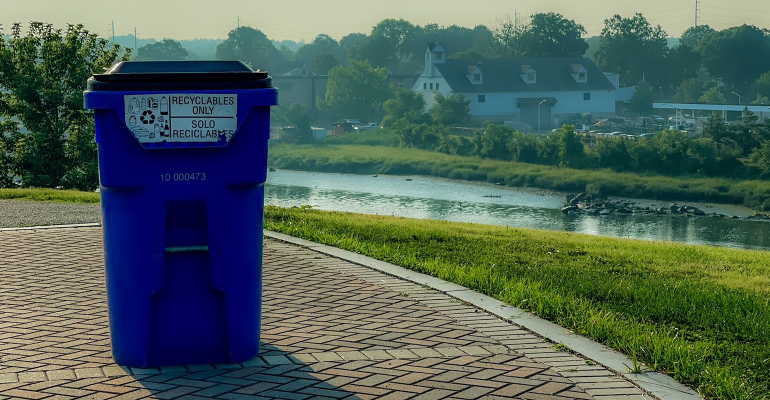 As of September 1, residents of member towns including Bethel, Bridgewater, Brookfield, Danbury, Kent, New Fairfield, New Milford, Newtown, Redding, Ridgefield, Roxbury, Weston, and Wilton will now have to separate "food-grade" glass containers and bring the items to a local municipal drop-off center. The new program was enacted to address contamination.

Bethel First Selectman Matthew Knickerbocker commented on the change, saying: "I think it's safe to say that with the average consumer average homeowner, they have their big old blue bin. They do their single-stream recycling. They put their glass in there. Oftentimes, a nickel wasn't enough to make it really worth their while to take returnable containers back to the store. So, they just put it all in there and they said, 'I'm a good citizen.' Well, we come to find out that a great deal of that glass is not recyclable, and even worse, it contaminates some of the materials that are recyclable. We're asking consumers and giving them the opportunity to separate the good glass from the bad glass and put it in one of these bins."

Knickerbocker explained that food-grade containers such as pickle jars, pasta sauce jars, liquor and wine bottles can be recycled and remanufactured indefinitely. The previous system saw residents place items such as broken mirrors, drinking glasses and other items with plasticizers in them in the recycling bin. While they improve the elasticity of the glass, items with plasticizers cannot be recycled and typically end up as landfill cover once it goes through processing at a MRF.

Through partnerships with local stakeholders Oak Ridge Recycling, Strategic Materials and Urban Mining, the HRRA is now able to collect and find an end-life for food-grade glass containers.

Oak Ridge Recycling CEO John Decker explained how recycling has shifted from a multi-bin to a single-stream process over the last few decades.

All of the "complicated separation" has moved to the back end of the process to make it easier for the consumer to participate in recycling programs. He noted a decrease in truck traffic, reduced emission and an increase in participation. Contamination from items such as plastic bags and garden hoses steadily rose as a result of the shift to single stream. And now, glass is "really detrimental," he says.

"Everything's getting mixed in our trucks, and all that glass is being broken down into small pieces, almost sand like material and getting in all the moving parts of the vehicle," Decker said.

Once the truck arrives at the MRF, the broken glass is caught in the processing equipment, causing deterioration. Eventually, it reduces the quality of the end products.

Urban Mining Partner Patrick Grasso, described what will happen to the glass collected from HRRA member towns. Glass will be taken to the company's facility in Beacon Falls, CT. where it will be turned into a Pozzotive, which is a "high-performance postconsumer pozzolan and functional industrial filler, which is made from 100% recycled postconsumer glass." The recovered material will be used as a cement replacement of concrete.

Grasso added that replacing concrete with the recycled glass alternative is the "best use" of waste glass because it reduces global warming. The energy needed to product a ton of cement produces a full ton of carbon dioxide.

"By using Pozzotive to replace 50% of that cement and concrete mix the overall carbon footprint of concrete and reduced by 40%. That's a huge number," he said.

Strategic Materials, the largest North American glass recycler, will be processing glass material collected from the program into fiberglass insulation, food & beverage containers, reflective materials, and other consumer and industrial products. Glass will be sent to the company's South Windsor, CT facility.

"Recycled glass and most of these products not only displaces virgin-mined materials like sand, but also melts at a lower temperature resulting in energy savings and CO2 emission reductions at our customers," said Andrew Crowley, director of operations, Strategic Materials. "A consumer in Connecticut can buy a glass-packaged product off the grocery shelf, use it, recycle it, and it could be back on back on the shelf in 30 days being reused. Glass is infinitely recyclable."

About 600 tons of glass was collected as part of the pilot program, with the anticipation to grow into the thousands of tons now that the program has launched, noted Executive Director HRRA Jennifer Heaton-Jones.

She concluded: "At the end of the day, the recycling program is only as successful as the residents participate. We need to change our relationship with material and see it as a resource, not a waste. Our HRRA glass program is a more sustainable recycling solution and will contribute to a more circular economy."