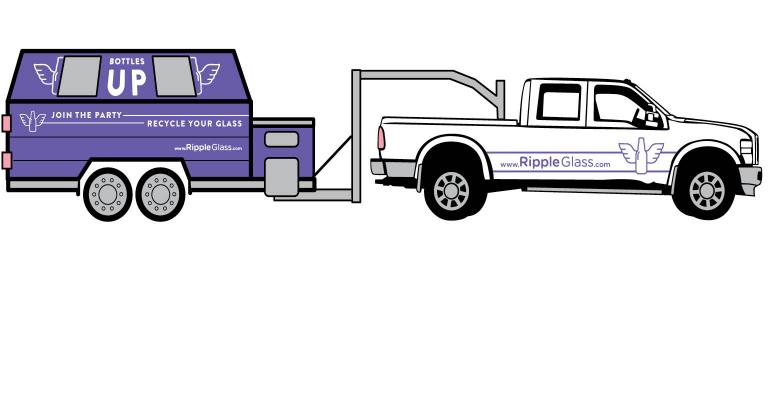 By tapping into the local marketplace, Ripple Glass has found a way to put collected glass to good use.

According to the Glass Packaging Institute (GPI), glass is 100 percent recyclable and can be recycled endlessly without loss in quality or purity. In addition, GPI reports that recycled glass can be substituted for up to 95 percent of raw materials and that it reduces emissions and consumption of raw materials, extends the life of plant equipment, such as furnaces and saves energy.

Kansas City, Mo.-based Ripple Glass seems to have cracked the code to some of these challenges. The company was founded in 2009 to both fill a service gap and tap into a ready-made, local market.

“Ripple Glass was a product of many years of research into glass recycling and [looking at] why we didn’t have an effective system, or an essentially non-existent system, in Kansas City, despite the fact that we have two million people and big fiberglass customers here. We had a market but no material,” says Mike Utz, president of Ripple Glass.

Utz was part of Boulevard Brewery Company, a local brewery, when the idea for Ripple Glass started to come together. The brewery was producing approximately one million case equivalents per year, and it felt like it was contributing to the problem of glass going into the landfill.

“We devised a solution,” says Utz. “In a lot of ways it was a corporate sustainability initiative—to be better community citizens.”

Ripple Glass had to start from scratch by creating a collection system and processing plant at the same time. With its collection system, efficiency was the top priority. It started by locating large bins in 60 locations around the metropolitan area, particularly at grocery and liquor stores. On the processing side, Ripple Glass’ plant does cleaning, drying, sizing, color sorting and screening for the final product to ensure everything meets the specifications of the buyer.

“Ripple Glass provides furnace-ready cullet [crushed, recycled glass] to Ardagh Group, Glass – North America. Ardagh Group uses cullet as a raw material for the production of glass bottles and jars in the U.S.,” says Ed Purtill, director of procurement at Ardagh Group. “[Our] goal is to continue to build relationships with cullet suppliers, such as Ripple Glass, to ensure the receipt of a high-quality product at a competitive price.”

Similar to GPI’s findings, Ardagh Group sees the many benefits of using recycled glass. “There are several benefits of using cullet in the glass manufacturing process, including extending the life of the glassmaking furnace and saving natural resources—one ton of cullet saves approximately 1.125 tons of the Earth’s natural resources and reduces the energy needed for mining and transportation,” says Purtill. “Additionally, for every six tons of recycled glass used, carbon dioxide is reduced by one ton, and a 10 percent increase in the use of cullet in the glass manufacturing process results in a reduction of energy requirements by three to four percent, particulates by eight percent, nitrogen oxide by four percent and sulfur oxides by 10 percent.”

By tapping into the local marketplace, Ripple Glass has found a way to put the collected material to good use. Its website states that, in Kansas City, where approximately 80,000 tons of container glass are consumed each year, only about 5 percent was being recycled previously. Now, through Ripple Glass, nearly 20 percent of the community’s glass is being recycled, and the company has diverted almost 200,000 tons of glass out of landfills across the region.

In April 2018, Ripple Glass will launch its collection service for bars and restaurants. Utz sees huge potential. “The vision is to have glass recycling throughout the entire Kansas City metropolitan area, including all bars and restaurants,” says Utz. “We have a unique situation here in that we have customers for 100 percent of the glass. If we could get every bottle and jar that was consumed in Kansas City, we could put it back in the local marketplace. We have every interest in getting all of that glass back into the market into new products.”