How and Why Rumpke Expanded From MRF to Glass Processing 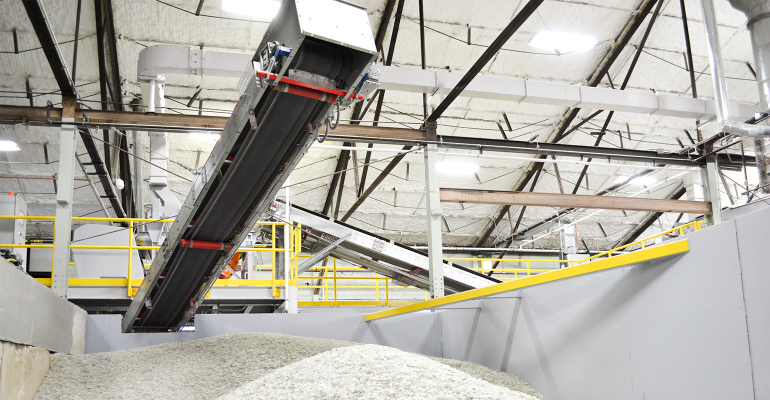 When Rumpke Waste & Recycling started collecting glass at its materials recovery facilities (MRF) in the early 2000’s it had very limited end markets. But the Cincinnati, Ohio-based company kept taking it in, and then in 2004 opened a glass processing plant in Dayton, still with unwanted glass stockpiling in its yard. The risky corporate decision to start cleaning, separating, and refining this waste stream is paying off. Municipalities want someone to take it off their hands, and for the last several years some businesses are looking to snatch as much of this cheap, recycled content as they can.

Now Rumpke gets glass from four internal MRFs and some customers and, even so, can’t keep up with the demand, which is coming from the container and fiberglass industries, says Steve Sargent, director of Recycling for Rumpke Waste & Recycling.

In its first year, the Dayton plant processed 1,000 tons a month of broken, mixed glass. Today it processes up to 6,000 tons a month. But the added asset has not exactly turned into a girthy cash cow. Glass is not a high-dollar commodity and pricing has been stagnant for years, which might be why Rumpke is only one of two MRF operators in the country to invest multimillions in infrastructure to manage this challenging but infinitely recyclable feedstock.

“The raw material value is low, but in the last five years we have seen more demand to introduce postconsumer materials, which glass can be one, to put in new products. An example is the LEED (Leadership in Energy and Environmental Design) standard in construction. It gives credit for insulation from postconsumer glass, and that is impacting the market,” Sargent says.

Manufacturers with sustainability goals have also pumped life into the market as they look to increase their products’ recycling content. About two-thirds of the glass processed in Dayton is sold to the fiberglass insulation market, and the container industry buys the other third. Owens-Illinois (O-I) and Anchor Glass are primary containers customers, and Johns Manville buys the fiberglass for insulation.

Rumpke collects single-stream recycling from municipalities; brings it to its MRFs where glass is screened out, separated, and sent to Dayton for further processing to meet buyers’ specs.

“Glass is not easy, but we get it out early at the MRF since we don’t want it to contaminate other material. And it’s working,” Sargent says.

The $500,000 in upgrades to its single-stream MRFs in Columbus and Cincinnati enables operators to pull bottle caps, paper scraps, and other small pieces as well do some clean up before moving material to Dayton for the final steps.

“The investment makes sense from a business perspective as we make product worth more so it can be further sorted and made into products that are fine grind,” says Jeff Snyder, senior Recycling manager for Rumpke Waste & Recycling.

The landscape has changed profoundly since just before the 2004 launch of the Dayton plant.

“Markets were erratic back then, and we had been stockpiling sometimes 100 tons a day. It caused storage issues and contamination issues. So, we decided to come up with a solution,” Sargent says.

For the first seven years the processing plant, which recently earned gold certification from the Glass Recycling Coalition, only made fine grind for insulation. But container glass demand began to grow and by 2011 that demand was enough to justify dropping an additional $3 million-plus in the Dayton plant to be able to make this commodity. The money paid for three optical scanners, conveyors, and screens.

Rumpke’s ability to separate glass by color is largely why Adams Brown Recycling started sending the material to the company.

“Before we went to single stream, we would keep glass separate by color, then crush and send it out in gaylords to a bottle manufacturer.

Now I can mix it and then Rumpke separates it, which is why it works for me. It’s such a low value I can’t afford to sort,” says Dan Wickerham, Recycling director for Adams Brown Recycling.

He no longer gets $15 to $40 per ton as he did when he sold direct to end-users. And he pays $16 per ton to ship it. But while converting to single stream means making less on glass, the operation’s bottom line is better when accounting for all waste streams.

“My loads are twice as big to six times as big since we went to single stream. But the result was we had broken, mixed cullet because we compact all materials. We can send this mixed glass to Rumpke to sort rather than have to invest in sorting technology,” Wickerham says.

“We do this because being able to recycle glass is important to our residents. Rumpke has been a good partner,” Wickerham says.

Rumpke moves about six to eight semi loads a day in total from its own four MRFs to the Dayton glass plant and diverts up to 60,000 tons of glass from landfill annually.

Sargent believes he’s in the right place; that glass recycling and processing will be viable long term.

“Our customers say in surveys that they want to recycle glass. We just won a nice contract because we offered glass and the other vendor didn’t. That has happened multiple times in the last few years,” he says.

Though luck has played into the company’s success—or at least location has. The Midwest, particularly Ohio and Indiana, are home to plenty of glassmakers looking for clean material.

O-I Glass is among those operations. The Perrysburg, Ohio-based manufacturer of food and beverage glass containers has 18 plants across 11 states that supply leading brands, and it buys from Rumpke.

Rumpke’s plant is about the same distance from both of O-I’s facilities, so the transportation was economical. And it meant being able to move product along the supply chain fast.

“Rumpke can collect from surrounding areas, process it, and we can get it back on our customers’ shelves in 30 days,” says Jim Nordmeyer, vice president of Global Sustainability for O-I Glass.

“When we can find someone close to our manufacturing facilities it makes the supply chain from curb to brand more efficient. It accelerates that circular economy,” he says.

“It’s going to be a challenge. It means the whole supply chain has to come together. We need consumers to recycle right and MRFs to process and make streams available to cullet processors for operations like Rumpke to further clean and color sort. Once that happens, we are happy to use it,” Nordmeyer says.

The question is: Will, and can, other waste operations invest in recycling glass?

“That’s something they have to think about,” Snyder says.

“Rumpke is entrepreneurial. We took a risk and did it because we wanted a viable end market for that commodity.”