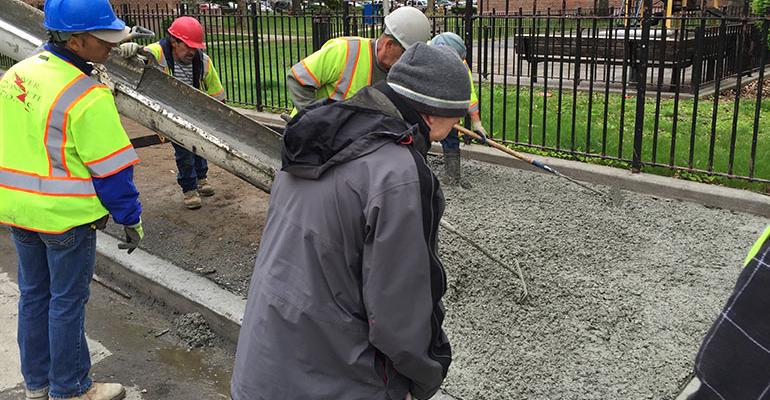 The final part of a three-part series this week examines the way one company uses wasted glass to address a long-time environmental issue of the architectural community.

A three-part series this week focuses on how some local governments and the waste industry are partnering to capture and reuse glass. Part three examines the way one company uses wasted glass to address a long-time environmental issue of the architectural community. Read part one here. Read part two here.

Portland cement has long been a staple to the architectural community, but every ton of this material produces a ton of carbon dioxide. New York City-based Urban Mining Northeast has found a way to lessen builders’ dependence on this environmental liability with a partial replacement material that performs at least as well as cement, while generating demand for recycled glass.

The company manufactures Pozzotive, a white pozzolan, which is a material made from post-consumer glass that can replace up to 40 percent of Portland cement in concrete. Pozzotive has gone into some high-profile building projects, including the United Nations Headquarters; New York City’s Second Avenue Subway; the New York Police Department Academy; naval buildings; several universities; ESPN headquarters; and City Point, the largest mixed-use development in New York City.

“We have demonstrated that, in varying levels of replacement, it enhances key performance attributes of concrete, both in block and poured-in-place applications. It provides more durability, pourability and resistance to freeze-thaw damage among areas, while reducing harmful CO2 (carbon dioxide) emissions generated by producing Portland cement,” says Lou Grasso, inventor of Pozzotive, managing partner for Urban Mining Northeast and a Leadership in Energy and Environmental Design Accredited Professional (LEED AP, meaning certified in green building practices).

Urban Mining sources glass from materials recovery facilities, bottle redemption programs and curbside pickup. Material undergoes a patented process to remove organic waste and other non-glass materials, and then it’s ground to a powder to be used in concrete block, pre-stressed concrete plank and precast concrete, among applications.

The company adds Pozzotive in its concrete masonry units.

“By 2020, I plan to use Pozzotive in every unit I manufacture. I am substituting about 30 percent of Portland cement with it, so I’m saving 30 percent carbon emissions, and that’s huge for me. Also important is that it’s regionally sourced post-consumer glass, meaning I know where it comes from,” says John Orsina, vice president of Westbrook Concrete Block Company.

He has finite storage for powdered cement, so he installed a fifth cement silo just to accommodate Pozzotive. 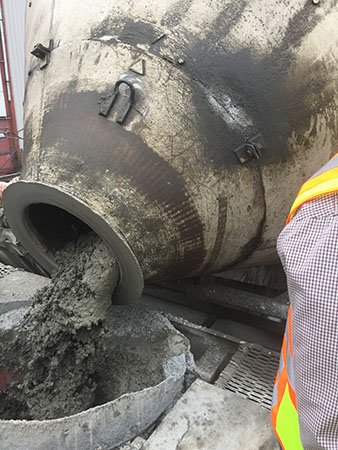 “It’s expensive to store, and the product itself costs me more, pound for pound, than Portland. But, for me, it’s worth it to do the right thing and be green. It makes sense for my business and hopefully will make sense to the design community, who are my customers,” says Orsina.

Michael Toth, an account manager at Glenwood Mason and a LEED AP, helped Grasso develop a market for Pozzotive among engineers and architects with sustainability goals.

“Some criteria for LEED certification include that materials be extracted, harvested and manufactured regionally. And a certain percentage of building materials must be recycled. Pozzotive contributes to these goals, among others. So, it makes it easier for us to give the LEED design community what they want, which is a better concrete product with sustainable attributes,” says Toth.

For now, Glenwood Mason is putting Pozzotive into two buildings and is working on specifying more.

The company’s goal is to increase the percentage of block it makes with Pozzotive, figuring that if it could incorporate it in 5 percent of its products, it could save thousands of tons of CO2 emissions at its New York City plant.

“Architects are telling us they want it in their buildings. And being that New York City is the busiest construction market in the U.S., it’s a great story for us to tell—that Glenwood is leading the way here by promoting this green product. Hopefully other markets will follow soon,” says Toth.

Plus, he says, “We know recycling glass is a problem, and concrete has been a good home for it. It’s a better alternative than landfilling it.”