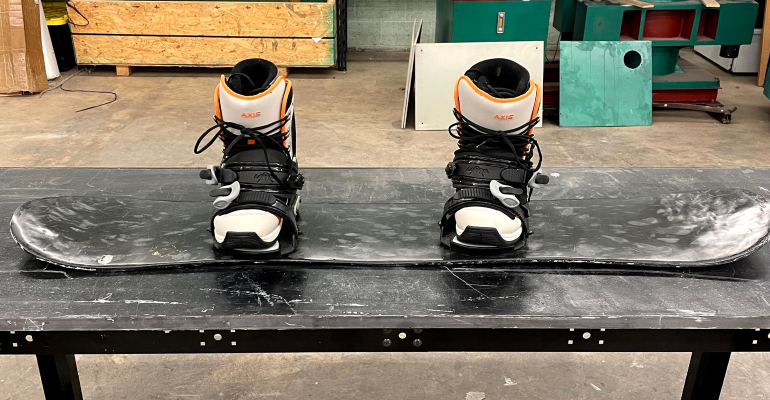 Knoxville, TN-based Carbon Rivers has completed a grant project with the Department of Energy (DOE) where it upcycled 100 tons of turbine blades in a year and a half. Now it’s moving to commercial scale to prove its technology at 20 tons a day, and in 2023 expects to process 200 tons a day. Feedstock will come not only from turbine blades but from glass fiber from auto, marine, and construction waste, with plans to sell products back to these same original equipment manufacturers (OEMs).

“Our upcycled glass fiber is comparable in price to virgin glass. But once you compound it into next-generation materials like 3D filament and thermoplastic pellets, it has a greater value. We can charge more because by taking the extra processing step, we are making very specialized, in-demand applications. Every OEM needs these,” says David Morgan, vice president of Business Development, Carbon Rivers.

The earliest work began with turbine blades donated by utility company Pacific Core Partners, and by now Carbon Rivers works with over a dozen wind OEM’s and owner/operators to both receive glass fiber waste and put the upcycled glass back into turbine blade manufacturing.  The company has similar relationships in other industries who both supply materials and are offtakers for next-generation glass fiber production.

“Each month we add industry partners in glass manufacturing, automotive, chemical plants, marine, etc., so that many global companies will achieve a circular economy in glass fiber production,” Morgan says.

The waste material is downsized via shredding, then sent through Carbon River’s furnace, where it is burned at high temperatures to recover glass, resins, and polymers.

Basically, the feedstock is vaporized leaving behind clean, reusable glass fiber that can be upcycled into composite products while the polymers can be used to fuel the pyrolysis furnace.

But the process, at least with the turbine blades, which currently is most of the feedstock, starts before the material gets to Carbon Rivers. Partner Logisticus Group, headquartered in Greenville, SC,  recovers blades at windfarms and cuts them to downsize then transport them.

The first focus out in the field is safety. Workers deal with slopes, mud, and rain and the blades are bulky, heavy, and hard to maneuver.

“Our processes to mitigate risks are adequate training, oversight, reiteration of safety protocol … and ensuring that our personnel are put in a position to be as safe as they possibly can,” says Phillip Mitchum, vice president of Execution for Logisticus Group, and a former GE executive who managed wind logistics for the corporation.

The next priority is to ensure efficiencies in the entire logistics operation.

“We have unique cutting methodologies … to maximize speed and eliminate debris or contaminant … and to maximize our ability to transport material in the least number of truckloads,” Mitchum says.

To build its business proposition and showcase potential products, Carbon Rivers made a small radio-controlled boat from upcycled fiberglass and a snowboard. The company is also fabricating a 28-foot electrified cabin cruiser out of a boat mold.

Looking ahead, the next three or four years will be spent ramping up to that 200-tons-per-day target.

Morgan referenced two more future focuses. One is to explore producing discontinuous glass fiber, which involves reinforcement of small wind equipment components.  They can go into nonwoven mats and other industry applications.

At this point the company is working with more wind turbines than other materials, because they were the sole source when it started with the DOE project to prove out the technology.

But the beauty of the system says Morgan is that it’s agnostic, which is why feedstock can come from multiple sources for varied applications.

Anything specifically made from glass fiber can in principle be put through the recovery process. Boats, windows, aircraft components, decking … explains Ryan Ginder, research assistant professor at the University of Tennessee, Knoxville, who developed the technology.

Reflecting on when he first got the notion to study glass fiber recovery, Ginder says, “It was one of those serendipitous, that’s-crazy-enough-it-just-might-work ideas I attempted afterhours one Friday evening in the lab.

The first proof-of-concept tests were on milligram-scale quantities of decommissioned wind blades. This was enough for me to collect data indicating the glass fiber’s potential for reuse in composites manufacturing.”

When DOE’s grant opened up, he and Carbon Rivers, who were collaborating on another project, joined to tap into this program to scale the technology and do a demonstration of recycled fiber composite.

The system’s ability to remove all polymers is key to making headway. Ginder explains: “Since all plastics eventually start breaking down if you get them hot enough, our process can tackle any resin. This is particularly advantageous because in composites, resin types are all over the place [and have different melting points]. But they all have the common denominator of glass fiber; and being able to take just about any composite allows you to reach production scales similar to virgin glass fiber. So, in principle you can achieve the same high-volume, low-margin business model as virgin fiber, making recycled fiber economically viable.”

Carbon River’s ambition is to scale up fast, but Morgan sees a lot of work ahead.

“The demand globally is going to be hard to keep up with. Our scale up is going to be pretty ambitious and aggressive to meet the needs of global glass fiber streams. We really hope to make a global impact, so we'll see what the next few months hold.”