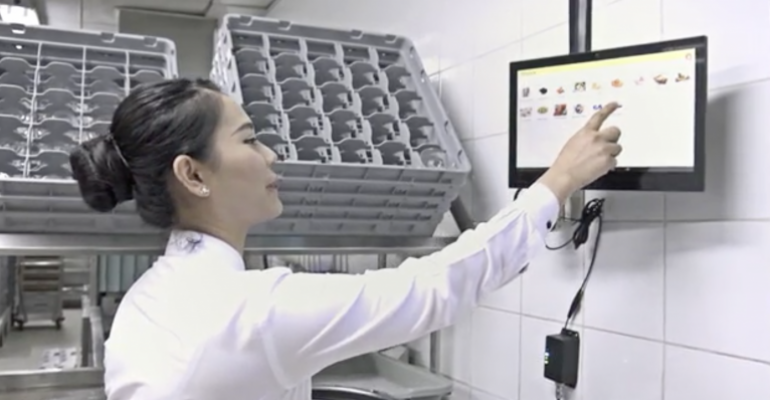 The company estimates it has saved generators more than $8.7 million due to process improvements.

A London-based company has developed technology to quantify food waste reductions using data collected by its users. Using a smart scale and tablets, Winnow helps employees at commercial kitchens track what they are putting in bins and tells them exactly how much value they are tossing away.

“We connect commercial kitchens to the cloud allowing them to record and analyze exactly what is put in the bin,” says Marc Zornes, Winnow co-founder. “This gives chefs the information necessary to drive improvements in their production processes to cut food waste in half, saving money and reducing their environmental footprint at the same time.”

The way it works is that as employees toss food, an electronic scale records the weight and tabulates its worth. The data is collected and stored on cloud-based software, which records and analyzes the day’s waste. Every time a weight is recorded, it sends a message to the user, giving the cost of the food they have put in the bin. All of this is viewable on special tablets running Winnow’s software.

Ultimately, the goal is to reduce what ends up in the bin entirely. Recording this information can drive improvements in production processes to cut food waste, saving money and reducing what gets thrown away. The data assists chefs in making better decisions, engaging staff and giving them the ability to set targets.

“Our role is to help provide intelligence for chefs to make better decisions and prevent food waste from happening in the first place,” says Zornes. “The impact of this is both environmental, in the form of reduced impact and CO2 emissions by reducing waste, and financial, by reducing waste, kitchens can reduce the food they purchase.”

Over the last four years Winnow has helped hundreds of kitchens cut food waste. The company estimates it has saved generators more than $8.7 million due to process improvements. Approximately 2,600 tons, or 5.8 million plated meals, of food also has been diverted from landfills, according to Zornes.

“When we first founded Winnow, a number of clients were unaware that they had a problem with food waste and that a technology solution would allow them to prevent food waste and generate improvements to their bottom line,” he says. “To overcome this, we worked with our early clients to demonstrate the opportunity in a small but representative scale.  We spent significant time with our clients to understand their business and adjusted our approach to be fit for purpose for how they work.”

Today, the company has expanded operations into 26 countries in Europe, Asia and the Middle East, including working with global brands like Compass Group, Elior, AccorHotels and Ikea.

“Through our smart scale solution, food waste is measured and reported in the Ikea restaurants, bistros and Swedish Food Markets. The data collected helps Ikea identify ways to prevent food being thrown away,” says Zornes.

Winnow’s technology fits in with home furnishings manufacturer and retailer Ikea’s Food is Precious initiative aimed to cut food waste in its food operations by 50 percent by the end of its fiscal year 2020.

To date, more than 20 percent of the Ikea stores have implemented the solution. The Sweden-based company, with 44 stores in the U.S., also utilizes the Portland, Ore.-based LeanPath digital scale to help eliminate food waste.

“We understand that food waste will require a holistic approach that covers the entire supply chain. Through working together with other organizations and companies we believe we can make a positive change—not only at Ikea but with other food businesses globally,” says Ylva Magnusson, a spokesperson for Ikea Food Services.

Zornes says that digital tools can help chefs drive significant change within kitchens and can help solve the problem of food waste on a global scale.

“We are planning to expand into new markets globally while continuing to grow in existing markets,” he says. “Ultimately we are working towards a future where every kitchen worldwide uses data to manage waste, in the same way they do now with sales or inventory management.”