The Battle Over Flushable Wipes: Why Recyclers Should Pay Attention 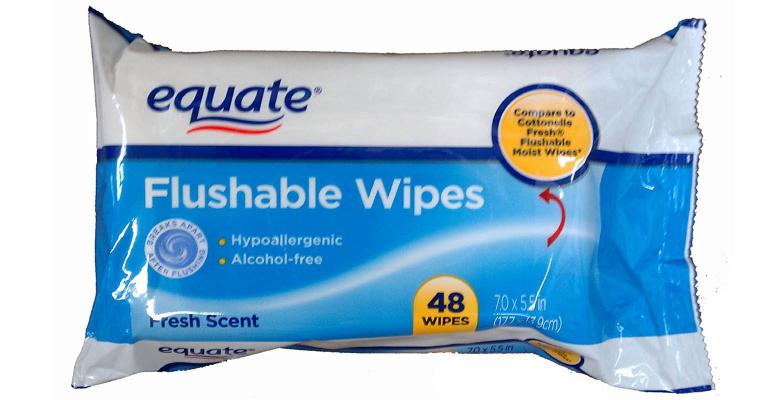 At the heart of the wet wipes battle is an argument over who defines the legitimacy of a product’s claims.

Homemakers once relied on discarded textiles such as sheets, towels and cloth diapers for household cleaning. And the fact that cloth rags could be washed and reused repeatedly was considered a bonus. For discreet sanitary needs, humans were more imaginative, but their options seem implausible by today’s standards. Most contemporary households abandoned cloth rags and other personal hygiene items and favored disposable tissue paper products for sanitizing and cleaning chores. First used in the sixth century by Chinese royalty, commercially produced toilet tissue was introduced to Western culture in 1857. Paper towels followed in 1909. Neither product was an overnight success. Diligent advertisers repeatedly tweaked features and benefits in search of the message that would expand their market. For paper towels, it would take more than five decades to convince homemakers to abandon the use of cloth rags. With the emergence of the throwaway society, disposable paper products finally gained mass appeal by the 1960s and remain firmly integrated into our lives.

Today, the U.S. is one of the most saturated tissue markets in the world. Consequently, analysts estimate annual domestic sales will increase less than one percent per year from 2016 to 2021. With limited growth anticipated for their core business, producers hope to jump-start profits with other related product lines. The major industry players see wet disposable wipes as the answer. Public acceptance for wet wipes seems to be on the fast track. Nevertheless, the pathway to success is strewn with obstacles and objections from municipal authorities, local governments and consumers.

Surprisingly, the allegations made against wet wipes seem parallel to issues expressed by the recycling industry over other products. Both point to the important effect that product design and labeling have on consumer behavior. Both demonstrate significant costs resulting from certain products entering their systems. Substitute the word “flushable” for “recyclable” in one of these industry dialogues and you’ll start to see the connection. How the wet wipes problem is resolved could provide insight for recyclers hoping to improve their situation.

Wet wipes are individual, nonwoven sheets designed to stay intact while packaged in liquid cleaning solutions targeted for specific tasks. Many contain plastic fibers to reinforce their strength and deter disintegration. There are wet wipes for cleaning glass, wood, leather, vinyl, laminates, granite and more. In fact, personal hygiene habits are becoming increasingly dependent on wipes designed for distinct areas of our bodies from top to bottom. The disposable nature of all wipes raises objections in some circles. However, the wet wipes meant for use on our bottoms are the ones causing a universal stink.

At the heart of the wet wipes battle is an argument over who defines the legitimacy of a product’s claims. In other words, who makes the call “to flush or not to flush?” In addition, there are questions regarding a producer’s responsibility for damages to a disposal or processing system resulting from their products. Are producers culpable for the misguided actions of consumers prompted to recycle or flush inappropriate items, but whose labeling is too similar for people to discern the difference?

Municipal wastewater treatment plants and operators of sewage conveyance systems around the world say that wipes can cause screen blockages and clog the equipment. According to the National Association of Clean Water, U.S. utilities currently spend nearly $1 billion annually to remedy these issues. That doesn’t include the expenses claimed by homeowners whose residential septic systems were severely damaged after flushing wipes.

I have never seen an estimate for the collective costs of equipment damage, downtime and added labor caused by film plastic and other unacceptable plastic products sent to U.S. materials recovery facilities (MRFs).  Based on an industry assumption that contamination costs processors $125 per ton, it isn’t hard to imagine that modern facilities could easily exceed $1 billion, particularly if the cost of disposing of those non-recyclable products is considered.

Cities in Iowa and Florida have attempted class action lawsuits against producers of wipes. Both were subsequently withdrawn or settled without damages. Their failed attempts have similarities. The suits alleged damages to treatment plants were caused by flushable wipes. Instead, findings in the cases demonstrated the damages were caused by nonflushable wipes. This is consistent with studies conducted in NYC, Maine and California, where more than 98 percent of the items examined were not labeled or designed to be flushed. Unacceptable items included baby wipes, all types of surface cleaning wipes and paper towels.

Learning from these failed attempts, a new wave of lawsuits and proposed legislation take a different approach. Some of the lawsuits have dropped efforts to seek damages. Instead, they mirror legislation introduced in Minnesota and the District of Columbia. The bills require nonflushable wipes to be clearly and conspicuously labeled “Do Not Flush.” Neither bill bans non-flushable wipes. Minnesota‘s bill had wide bipartisan support and passed in the Senate, but it was stalled in House committee. The District did adopt the legislation, which was subsequently challenged in a lawsuit filed by Kimberly-Clark.

The point of contention is whose definition determines the “flushability” of a wipe. Kimberly-Clark claims its wipes comply with criteria established by the International Nonwovens and Disposables Association, an industry trade group. A more rigorous “flushable” standard defined by the National Association of Clean Water Agencies is acceptable to the District. The Federal Trade Commission (FTC) also had standards issued after a previous order required a manufacturer to recall its nonflushable products.

Because wastewater treatment plants follow standard engineering design practices and choices of equipment, there are limits to the realistic variables that could be proposed in accepted definitions.  With the sophisticated technology available in MRFs nationwide, perhaps we are getting closer to a point where we won’t have to explain to consumers why a product is technically allowed to be labeled “recyclable,” even though it is not readily “recyclable” by local conditions.

Education as an alternative

The District is banking on consumers being less confused by a package that clearly tells them what NOT to do. Minnesota regulators, local governments and legislative supporters concur. There are studies that prove humans respond better to more direct messaging intended to stop negative behaviors. Following the lead of other consumer products facing bans, fees or other constraints, the Association of the Nonwoven Fabrics Industry (INDA) does not favor legislation. Much like the American Progressive Bag Alliance advocates against local bans on plastic bags on behalf of Plastics Industry Association (PIA), INDA works through its partner organization, The Responsible Flushing Alliance (RFA), to modify consumer behavior.

Marketers understand that conscientious consumers are willing to pay premium prices for products compatible with their perception of quality. In the contemporary marketplace, environmentally friendly claims can significantly increase a product’s desirability. Products gain an important competitive edge by using such attributes to differentiate themselves. The ability to flush away your discards has the same purchasing appeal as knowing a product can be recycled.

It is worth noting that one producer challenged the District to retain its product labeling and thus far has succeeded in delaying any change for itself. It speaks loudly to the value of perceived “flushability” and in our case “recyclability” as a competitive advantage.

Truth in labeling cases isn’t always black and white. As the studies show, lots of things can be physically flushed through the system, but they really shouldn’t be. Likewise, we see too many items making it through the recycling collection system that should never enter the cart. At the receiving ends, the results are equally problematic. At what point is the producer complicit in causing the consumer’s actions?

For years, recyclers have been waging the war for product design compatible with their systems along with accurate, understandable product labeling. The arguments over wipes seem to have reached a head quickly. The commonalities make this issue worth following.