HomeEnergyGas-to-EnergyWays2H, Local Power Aspire to Sell Hydrogen from Waste for Microgrids
Recent
Machinex Upgrades West County Resource Recovery in California
May 27, 2022
EREF Hosts Record-Breaking Charitable Auction, Proceeds Directly Support Scholarships and Scientific Research
May 27, 2022
This Week in Waste: Top Stories May 23 - May 28
May 27, 2022
Landfill Emissions Measurement: What We Know, What We Need to Know
May 27, 2022
POLL
SWANA & Oceans Caucus Foundation Host Congressional Briefing on Recycling
May 27, 2022
Collaboration Leads the Way in Connecticut to New Extended Producer Responsibility Law for Management of Discarded Residential Gas Cylinders
May 27, 2022
An Uber-Style Service for Curbside Recycling
May 26, 2022
S&B Selected as Contractor for New Hope Energy’s Advanced Plastics Recycling Unit
May 26, 2022 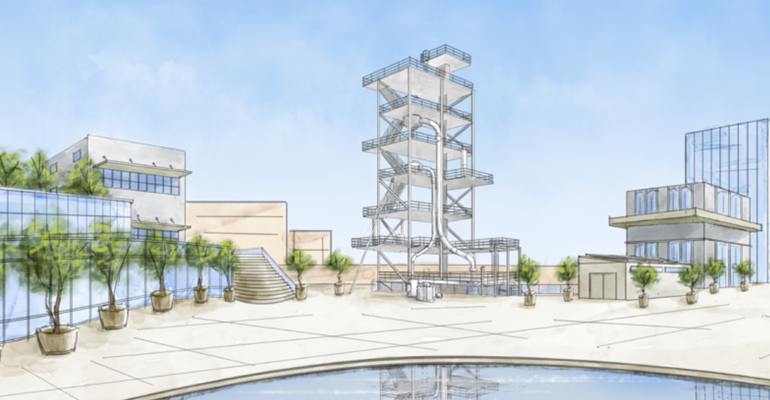 A hydrogen from waste plant

There’s a fairly new movement in the U.S. where some jurisdictions are investing in microgrids to bypass utilities while generating locally sourced clean power that is delivered directly to the end user’s site, which could for instance be a small hospital campus or an entire downtown area.

The energy is commonly sourced from solar and batteries, but not long ago, Local Power, a Haydenville, Mass-based research and development company, began integrating renewable hydrogen into the microgrid mix. And now it is working with developer Ways2H to bring hydrogen, specifically from waste, into these systems. This latest concept is not just a way to secure locally sourced clean energy, but a way that governments can sustainably manage their would-be trash and cut disposal costs, say the two partners.

“I have been incorporating hydrogen from electrolysis in our consulting work for years, but now I see an opportunity with hydrogen from waste, especially plastics. It’s cheaper and solves the problem of oceans filled with plastics,” says Paul Fenn, founder and president of Local Power. Fenn created a model called Community Choice Aggregation (CCA) whereby jurisdictions across the country aggregate buying power to control their supply and source of energy.

He’s banking on buy in from climate-conscious communities.

“Plastics have ended up in oceans when municipal recycling programs have offshored their waste. So, there is a dire need for municipalities to repair that problem,” he says.

The plastics problem has only grown the past several years since shipping to China is no longer an option, leaving limited places to send these materials. But with community microgrids waste wouldn’t even have to leave town.

End users get a daily delivery of small tanks of hydrogen, which does not as yet include hydrogen from waste. Fenn and Ways2H CEO Jean-Louis Kindler are working to secure feedstock from waste companies and municipalities, with plans to convert it and sell the energy for microgrid use.

For microgrids he wants to develop, 10 to 30% would come from hydrogen. He tells clients and potential clients that hydrogen-powered microgrids will help ensure resilient energy that continues to flow when the traditional utility grid goes down. This system will cut dependency on the sun to create renewable energy and will limit reliance on large battery storage to overcome the issue of unpredictable availability of renewables.

With hydrogen sourced specifically from waste, says Kindler, “Not only are we addressing a waste problem, but if we can utilize carbon capture and storage [sequestering C02 emitted from the hydrogen production process] we are doing better than that because we are taking carbon that is in the atmosphere and sending it back underground. So, it’s truly a carbon-negative solution.”

The hopeful plan is to truck energy daily from local landfills to the buildings it will power.  Kindler’s technology should do well to support this system as Ways2H’s waste-to-hydrogen production units are modular, transportable, and easily installed onsite, close to where waste is produced.

Fenn says delivery of one small tank a day would sufficiently power a building indefinitely.

It will mean using less grid power, thus achieving a lower carbon footprint as the grid itself is carbon intensive, with greenhouse gas emissions generated by power plants that supply utilities.

Fenn says he has completed year-long consulting projects with several cities interested in investing in a community microgrid that would integrate clean hydrogen sourced from waste.

“They are now paying others to take away their waste, and we would convert it at  Ways2H’s processing facility, put it on a tank truck and drive two to five miles a day delivering the hydrogen and returning to the landfill,” Fenn says.

Now he is addressing municipalities’ questions about how the microgrid would work, making sure it’s safe, and discussing what would be entailed in building upgrades to accommodate the system.

He and Kindler are optimistic about their prospects. About 1,500 U.S. municipalities representing 30 million Americans provide CCA service, many who are looking for new sources of local, reliable, renewable power to offset their carbon footprint.

“We’re tying together key components of the climate problem — energy, decarbonization and resiliency and also removing grid barriers to deployment of local energy generation. And with hydrogen from waste comes the added benefits of reducing costs for waste disposal and adding to the solar array by providing an off grid-fuel source that comes from landfill,” says Fenn.