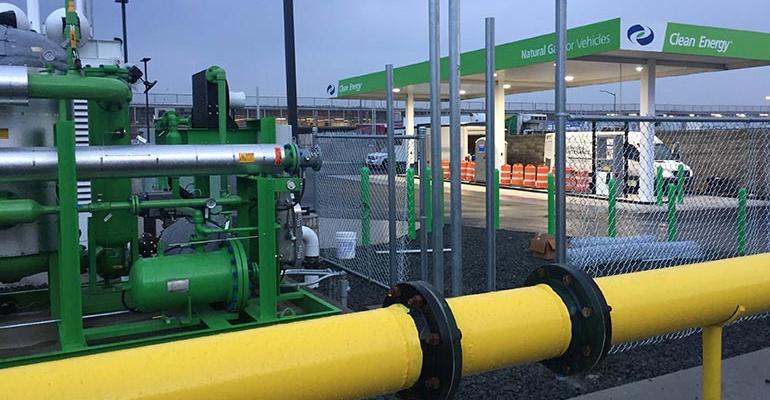 “A few blocks from here is Hunts Point Market, the largest food distribution center of its kind in the world, resulting in approximately 15,000 truck trips per day,” said Chad Lindholm, vice president of sales for Clean Energy, in a statement. “This long-envisioned station will serve fleets operating in Hunts Point with a lower-cost alternative to diesel fuel that can lead to substantial reductions in truck-related pollution and greenhouse gas emissions.”

Trucks fueling with Redeem represent a significant reduction in greenhouse gas (GHG) emissions. For example, 100 trucks running on RNG can lower GHG as much as 9,294 metric tons annually. This is equivalent to planting 237,942 trees, removing 1,961 cars off the road or recycling 3,331 tons of waste that would otherwise be sent to the landfill.

“I applaud and congratulate Clean Energy today on making a renewable natural gas fueling station a reality for Hunts Point trucking fleets in the South Bronx. Natural gas trucks, particularly ones fueled by renewable natural gas, have a tremendously low carbon footprint, which is important for communities disproportionately affected by diesel emissions,” said NYC Department of Transportation Bronx Borough Commissioner Nivardo Lopez in a statement. “The addition of this station now makes possible and plausible the transition of large portions of Hunts Point fleet industries to this cleaner, domestically produced fuel.”

“This new Hunts Point station is no ordinary fueling station. It is the first in the city to supply only the renewable form of natural gas made from waste,” said Joanna Underwood, founder of Energy Vision, in a statement. “Private and public fleets that fill up here can provide their critical services with virtually no health-threatening air pollution or greenhouse gases. Bravo to Clean Energy for helping our city achieve its clean air and climate goals.”

“RNG stations like this one will also help tackle our waste challenges by leveraging organic wastes as a valuable energy resource instead of discarding them, letting them rot and warm the climate,” added Underwood. “The RNG fuel delivered here at Hunts Point is piped in from distant landfills or food or farm digesters, which means New York will get the environmental and health benefits of that production. But more stations like this one could soon be using home-grown RNG made from the city’s own wastes, which would multiply the benefits and help meet the city’s zero waste goals. New Yorkers generate more than 1.2 million tons of food waste a year, which we now spend hundreds of millions a year to ship to landfills out of state. But this waste is a renewable energy goldmine. It can make enough RNG to power the city’s whole fleet of 5,000 heavy-duty trucks. Add to that the RNG that could be generated from city’s 14 wastewater treatment plants (like the one just around the corner), and we could produce enough RNG locally to power every city-owned and private waste hauling truck on our roads and then some.”