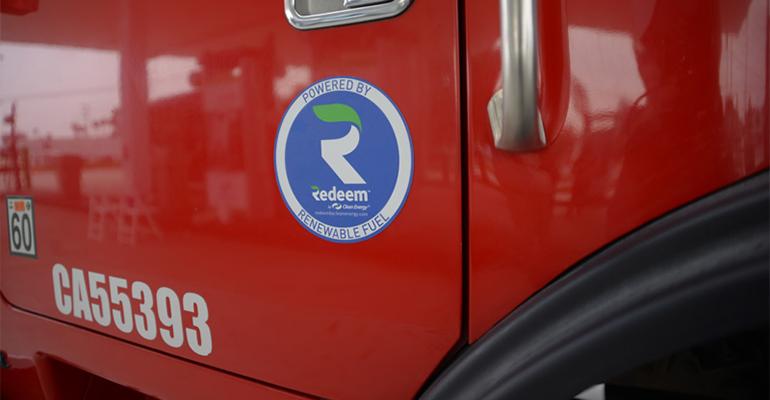 This marks a 30 percent jump from the previous year and a strong finish in transit and solid waste.

The environmental impact of replacing 143 million gallons of diesel fuel with RNG is the equivalent of reducing 745,000 metric tons of greenhouse gas emissions—also equal to planting 12 million trees, removing 158,000 cars off the road or reducing 260,000 tons of waste that would otherwise be sent to the landfill, Clean Energy pointed out. 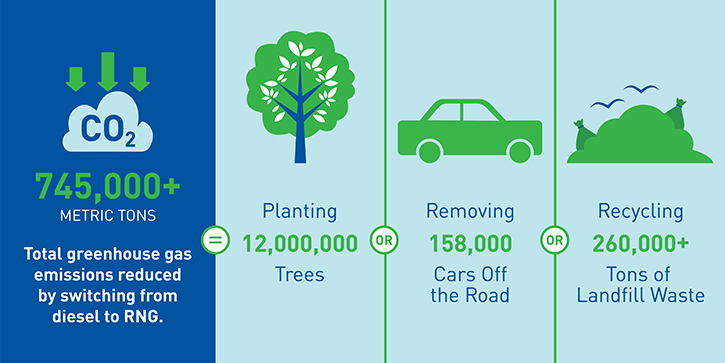 Redeem was the first commercially available RNG vehicle fuel, derived from capturing biogenic methane that is produced from the decomposition of organic waste from dairies, landfills and wastewater treatment plants.

In 2019, Clean Energy unveiled goals to exclusively offer zero carbon Redeem at all of its fueling stations by 2025. At this pace, Clean Energy said it would outdistance other alternative fuels, including electric vehicles.

Clean Energy’s 2019 Redeem totals were bolstered by a seven-year contract with UPS for 170 million gallons to fuel its large fleet of natural gas heavy-duty trucks around the country, the largest purchase of RNG ever in the U.S. In 2019, Clean Energy provided an estimated 16 million gallons of Redeem to UPS.

“Fleets are discovering that RNG, together with natural gas engine technology, is a proven solution that can significantly decrease the impact of harmful emissions and reduce greenhouse gas emissions,” said Chad Lindholm, vice president of Clean Energy Fuels, in a statement. “Clean Energy’s corporate vision is directly tied to improving air quality and positively impacting public health, so we’ll continue to grow Redeem’s role in our fuel offerings to provide a clean and cost-effective alternative to diesel fuel.” 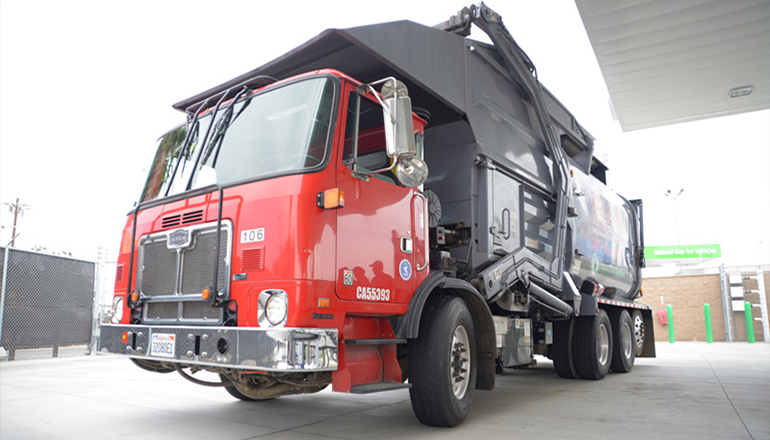 The city of Tucson, Ariz., has signed a multiyear maintenance agreement with Clean Energy. The city has more than 75 compressed natural gas (CNG) waste and recycling trucks and 50 CNG transit buses that combined use more than 2 million gallons annually.

The city of Philadelphia has started to replace its diesel refuse trucks with CNG trucks, contracting with Clean Energy to retrofit its city garage to make it CNG-compliant. Clean Energy also will design, build, operate and maintain a 43-truck private time-fill CNG station, with room for expansion, at the same location. The city has already received its first two CNG refuse trucks, which are temporarily fueling at Clean Energy’s Philadelphia Airport Station. Philadelphia will be consuming an estimated 250,000 gallons of CNG when it reaches 43 trucks in 2021. Clean Energy also has a 10-year maintenance contract for this station. 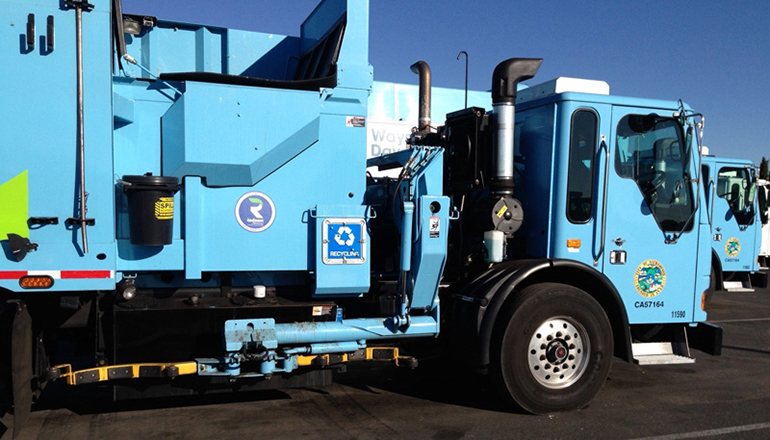 Homewood Disposal Inc., headquartered in Homewood, Ill., is adding 13 CNG refuse trucks to its fleet that will fuel with an expected 150,000 gallons of CNG per year.

Ecology Auto Parts, based in Southern California, has signed a five-year fuel contract for an estimated 3.5 million gallons of Redeem to fuel 47 new Class 8 trucks that will fuel within Clean Energy’s public network in Southern California. The trucks were purchased through Clean Energy’s Zero Now program, which brings the price of a natural gas truck at parity with a diesel truck while offering a guaranteed fuel discount for the duration of the agreement.

The Orange County, Calif., Department of Public Works signed a five-year renewal agreement for an anticipated 750,000 gallons of Redeem at its public access station in Orange, Calif., to fuel 50 municipal vehicles such as sweepers and dump trucks, with the remaining volume dedicated to public and third-party usage. The contract also includes continued operation and maintenance for the length of the agreement.

LAZ Parking, which operates more than 40 CNG buses across Southern California, has signed an agreement for an expected 800,000 gallons of Redeem.

Amato industries has renewed a commitment for an estimated 360,000 gallons of Redeem over the three-year contract to provide RNG for the shuttle company’s 17 hotel and charter service shuttle buses. 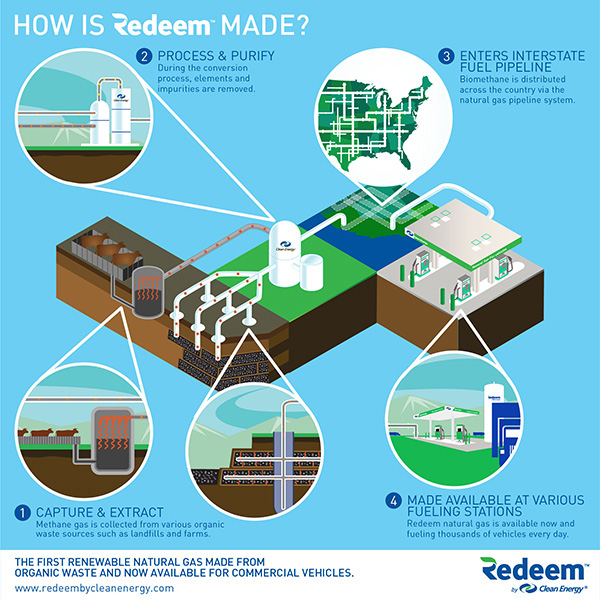 IRS Demo, a demolition company based in Los Angeles, has inked a three-year agreement for approximately 225,000 gallons of Redeem. The company has added three new CNG trucks to its eight-truck fleet, which will fuel at Clean Energy’s station in Commerce, Calif.

Fox Rent A Car has renewed a fuel contract for approximately 210,000 gallons of Redeem over three years to power its 17 CNG rental car shuttles at Los Angeles International Airport and McCarren Airport in Las Vegas.

Having doubled its natural gas street sweeper fleet in the past 36 months, Sunset Property Services in Irvine, Calif., has signed a three-year fuel renewal contract for an expected 180,000 gallons of Redeem over the duration of the agreement.

Western Eagle Shuttle in the California Bay Area is now fueling with Clean Energy, having signed a three-year contract for an anticipated 90,000 gallons of Redeem to fuel passenger shuttles at San Francisco International Airport.

BC Transit, which provides public transit services to dozens of British Columbia communities located outside Metro Vancouver, has again contracted with Clean Energy to design, build and maintain a CNG station in Langford. This agreement includes upgrading the existing Langford garage and fueling island to make them CNG-compatible. This station will initially fuel approximately 60 CNG buses with an ultimate capacity of 120 buses with a minimum of 8 million gallons dispensed over the life of the 13-year contract. 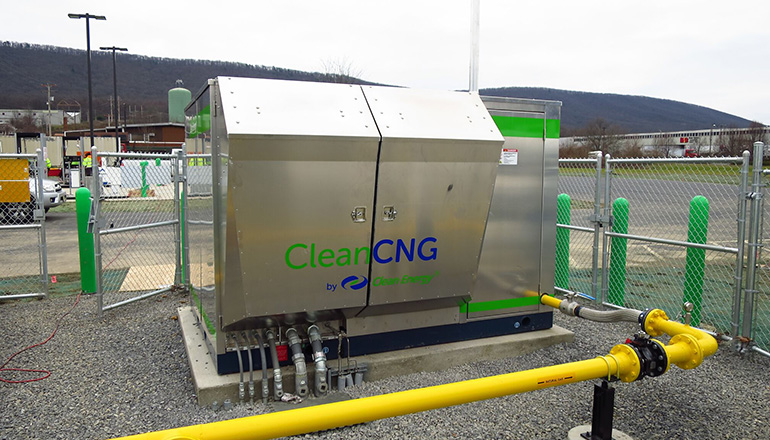 “Clean Energy is very proud to continue our partnership with Translink – Coast Mountain Bus and looks forward to working with them as they continue to add to their fleet of approximately 300 clean burning natural gas buses located at their three stations,” noted Lindholm.

The city of London, Ontario, is transitioning a fleet of 37 refuse trucks to CNG at the rate of 10 vehicles per year over the next few years. The trucks will fuel at the Clean Energy retail station at the London Pilot Flying J station, consuming an anticipated 51,000 gallons per year.

Clean Energy also renewed its CNG station maintenance agreements with transit agencies for the cities of Medicine Hat and Red Deer in Alberta.