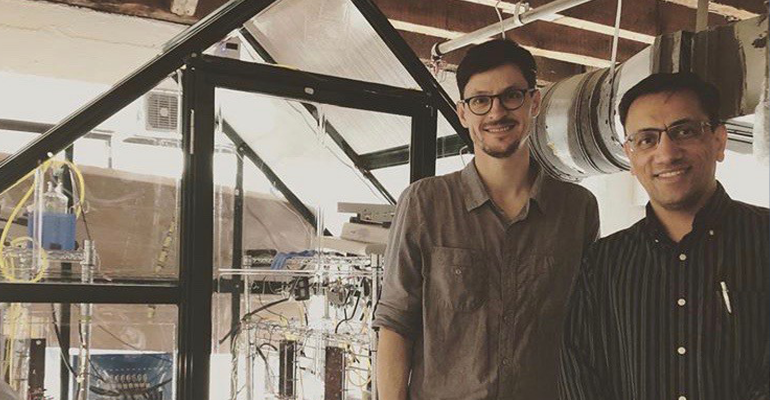 Renewable, clean hydrogen could cut greenhouse gas emissions from fossil fuel by up to 34%, reports  Bloomberg New Energy Finance, and plenty of developers are racing to commercialize their own version of this low- to zero-carbon alternative fuel, usually leveraging electricity. Though some entrepreneurs have begun making hydrogen from waste—usually dry materials. But start up Electro-Active is making it from food waste, combined with electricity.

“In simplest terms, we use electrons and protons from food, which have electric charges, to make hydrogen,” says Electro-Active Co-founder Alex Lewis, of the technology he developed with partner Abhijeet Borole at Oak Ridge National Laboratory, which is sponsored by the U.S. Department of Energy.

The system is modular, designed as such to provide flexibility. It can run at small scale to match the end user’s needs in terms of volumes while providing capability for expansion.

Lewis and Borole spun out from ORNL in 2017. They’d spent five years there, receiving initial funding and a home for their research.

“We began at Oak Ridge in an academic context, but we saw the impact this type of work could have and didn’t want to let it sit on the shelf. So, after our lab work, we bootstrapped on our own to see where gaps in food waste management and food waste conversion are. We also saw the gap on the hydrogen side with supply. There need to be more onsite solutions to manage waste and make hydrogen, and we have found a way to address both,” Lewis says.

He and Borole say they have reduced their production costs tenfold with design changes and by finding lower cost materials.

They calculate their production costs will be $5/kg initially, based on their protype’s performance and estimated cost at scale. Their target is to reduce to $2/kg by 2030, in line with Hydrogen Council’s renewable hydrogen production cost projections for 2030 ($2.3 and $1.4 per kg).

They have increased their hydrogen threefold, though their scale up still represents very small units.

As far as environmental metrics, using U.S. Environmental Agency modeling, they determined their product is carbon negative and estimate that they can remove about 82 tons of CO2 equivalent per ton of hydrogen.

Most of the few other developers who are making hydrogen from waste leverage anaerobic digestion, gasification, or pyrolysis. But these technologies require additional preparation and purification steps. Electro-Active believes, based on their research and discussion with industry, that these alternatives have more upfront costs.

“We have one reactor and one step. There is no methane intermediate because of the way the technology metabolizes food waste. So, there is no chance of methane leaking and releasing carbon,” Lewis says.

Now the partners are working toward their target – a small commercial-size unit – to produce about 20 to 100 kg of hydrogen a day and process six to 30 tons a day of food waste. This capacity would typically require about 10 stacked modules which would be deployed in shipping containers to food waste generators.

The company’s strategy to bring the technology to generators while offering them both a service and a usable end product is largely what drew the interest of ORNL, according to Dan Miller, director of Innovation Crossroads ORNL.

Referring to the start-up’s double-edged business model, he says “Electro-Active Technologies’ approach to develop modular systems to locate with partners that generate food waste and that need hydrogen is gaining traction. And it is because of this two-sided benefit.”

Lewis and Borole have completed a beta prototype, which entailed scaling and stacking individual units –steps that allow them to get to their targeted scale while maintaining performance.

This work provided the foundation for a pilot slated for Q4 2021 at a U.S. grocery chain [they won’t name region] that has landfill food waste diversion goals. They are also in negotiations to begin a pilot in Asia with a potential client that they are not ready to name.

“The main goal of the pilot is to validate what we learned so far. We’ve  done some stacking of these modular units, so we know what needs to happen in order to successfully scale. Now it’s validating with a higher number of units in the field,” Borole says.

Later they anticipate selling in Europe and Asia, regions that are also pursuing hydrogen and pushing food waste diversion.

Electro-Active will initially target food companies that use fuel cell technologies like forklifts, offering both waste management and hydrogen that can be deployed on site.

With anticipated growth, they will look to partner with haulers and municipalities to support their organic waste management efforts.

“We see our proprietary technology someday being set up at transfer stations where operators could separate food and liquid on the front end, with the solid residue going to compost.

This would reduce the waste they have to haul elsewhere. And once we make larger volumes of hydrogen, through these partnerships, we could possibly supply to fuel stations. Waste would remain local as would the resulting energy. So, the benefits would stay in communities,” Lewis says.