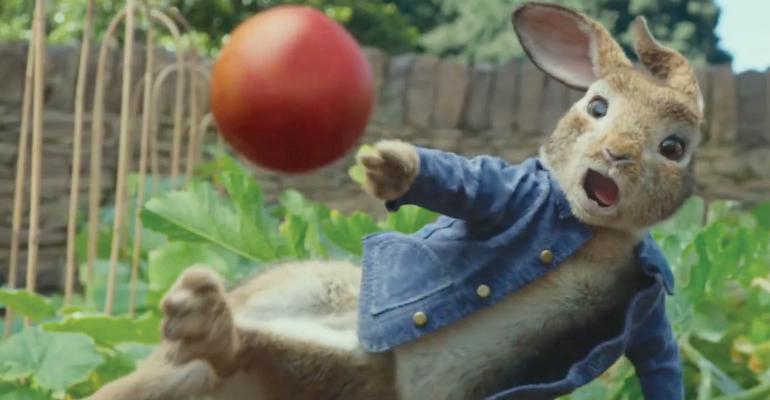 The campaign is part of The Ad Council’s Save The Food Campaign that encourages Americans to make simple lifestyle changes.

Well-known chefs like Anthony Bourdain, Dan Barber, Mario Batali, Massimo Bottura, Sean Brock and Danny Bowien are teaming up to advocate for food waste reduction in the U.S. And the latest celeb to join the growing list is Peter Rabbit.

The new, CG-animated version of Beatrix Potter's beloved rabbit (voiced by James Corden) is participating in the Better Ate Than Never campaign to reduce food waste. The campaign is part of The Ad Council’s Save The Food Campaign that encourages Americans to make simple lifestyle changes like making shopping lists, freezing food and using leftovers to reduce waste in their own homes.

From José Andrés to Anthony Bourdain, chefs around the world are joining the battle to end food waste. But now, they've been joined by fresh produce's biggest celebrity proponent of all: Peter Rabbit. Yes, on Feb 9 of this year, the new Peter Rabbit movie will be hitting theaters, and the new, CG-animated version of Beatrix Potter's beloved rabbit, (voiced by James Corden) is taking part in the "Better Ate Than Never" campaign to reduce food waste.

If you haven't heard, food waste is a massive problem in the food world that affects children and adults (of both human and non-human varieties) alike. Every year, 40 percent of food in the US is thrown away without getting eaten, contributing to the 1.3 billion tons of perfectly edible food that are lost or wasted worldwide annually, according to the United Nations' Food and Agriculture Organization. Considering that almost a billion people go hungry every day in a world that produces more than enough food to feed everyone here, it's worth being aware of from an early age.