Adam Lowy spent years working at his family’s moving company and in that time saw customers toss eye-opening volumes of perfectly good food or leave it behind in pantries. He became keenly aware that there was no standard process to deal with this excess wasted food– a lot of which was nonperishable, and he got an idea:

“Moving companies are already in these homes, and it’s no extra cost to them to pick up a couple of additional boxes of nonperishable food and drop them off at a foodbank,” says Lowy. His family’s company started doing just that – and from there Lowy founded New Jersey nonprofit Move For Hunger to take the concept further.

It’s grown to a nationwide operation powered by a robust network of volunteer movers that pick up food; other partners are property managers, relocation companies, and furniture rental companies. Each has its part in the food-rescue chain. The relocators, property managers, and furniture rental companies tell residents moving out how they can donate food without having to take it anywhere; then they contact Move For Hunger who dispatches the movers to take it from there—trucking donations where they’re needed.

“We are basically bringing a food drive into someone’s living room to make it easier for them.  It’s moving day and the mover gives you information about local hunger needs and encourages you to donate. Then they deliver your donations free of charge,” says Lowy.

In 11 years, Move For Hunger and its partners have delivered 20 million pounds to local food banks, which provided nearly 17 million meals. In the past seven months alone, amidst the pandemic, the team collected and delivered over 3 million pounds of food.

The nonprofit has also detailed these movers to places besides homes, including schools, corporations, and other sites that host food drives organized by Move For Hunger. More recently, they show up at sports events to pick up and transport excess peanut butter packs, granola bars, beverages, and other leftovers– up to 250,000 pounds a year that are often otherwise thrown in the trash after the races.

By now the well-oiled operation includes 1,000 moving companies across the U.S. and Canada that the nonprofit found through moving associations.

The original 10 properties it collected from has grown to 1,500, with 300,000 apartment units and includes participation from some of the largest corporations in the U.S., with Greystar, Equity Residential, Avalon Bay, and Bell Partners among them. CORT is its primary company in the furniture rental niche. Move For Hunger works with relocation companies like Altair Global and SIRVA, as well as some of the top Fortune 500 companies who hire these relocators.

“These large corporations have put in policies that they want relocators to provide opportunities for the employees they are relocating to be able to donate food.  And this has driven more moving companies to participate. They can get more business by making food recovery a core part of their operations, as can our other partners who do the same,” says Lowy.

When residents at one of Pillar Properties’ apartment buildings give notice they are moving, management gives them letters from Move For Hunger with information about why to help and how they can do it. The Seattle, Wash.-based company gives them recyclable paper collection bags, and periodically drivers come out to pick up aggregated donations. 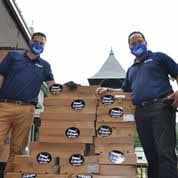 This gives people an easy way to donate while giving back to the community, says Pascal Coufal, property manager at Pillar Properties’ Century community.

In addition to reaching out to folks who are leaving, Century hosts food drives for the community, then contacts Move For Hunger to arrange for pick up.

“We do themed events to target specific items, like a Mardi Gras drive where we would collect beans and rice, or a Back-to-School theme might be peanut butter and jelly.

It’s a way to collect what food banks are looking for while making it fun … people are looking to be a part of the neighborhood so [in addition to having a way people who are leaving can donate] programs like this tie it together for those who are not leaving,” says Coufal.

Bayshore Moving and Storage in Delaware and Virginia is happy to offer food donation to its customers too.

“It’s easy for them because we are doing the lifting – the moving part— whether one or 10 boxes,” says Andy Larmore, vice president and owner of Bayshore Moving and Storage.

He has invested time and money in marketing, with one concept that’s gotten some attention being a truck with full wrap that carries Move For Hunger’s logo. He does social media to spread the word further.

“It works well to increase community awareness. It helps a little with our marketing, but we get involved more because we want to do what we can to give back to the community,” says Larmore.

Bayshore transports at least 500 pounds per month for Move For Hunger. And it has done food recovery independent of the nonprofit for 20 years.

“We are always looking for opportunities to help our community where we can, based on our services and abilities. It made sense to get involved with Move For Hunger to help more,” says Larmore.

When COVID-19 broke out, Move For Hunger took on other roles as new needs arose. It began working with consumer packaged goods corporations to make large-scale donations and to see that excess products nearing their expiration got delivered to where they are needed. Companies like GoGo squeeZ, Sodexo, and Kraft were able to donate over three million pounds of food collectively at no cost to them or to the charities.

The nonprofit is now sending its volunteers to organizations that rescue food from farms and has also started working with freight companies with refrigerated trucks to recover fresh produce.

“When we think about creating sustainable, lasting change it’s not about one-off food drives or one-time food recovery efforts. It’s about changing the way the industry functions, and if we can help companies make food donation a core part of how they do business without increasing their cost, there will be a sustainable process that will live on well beyond our nonprofit organization. And that’s our goal,” says Lowy.